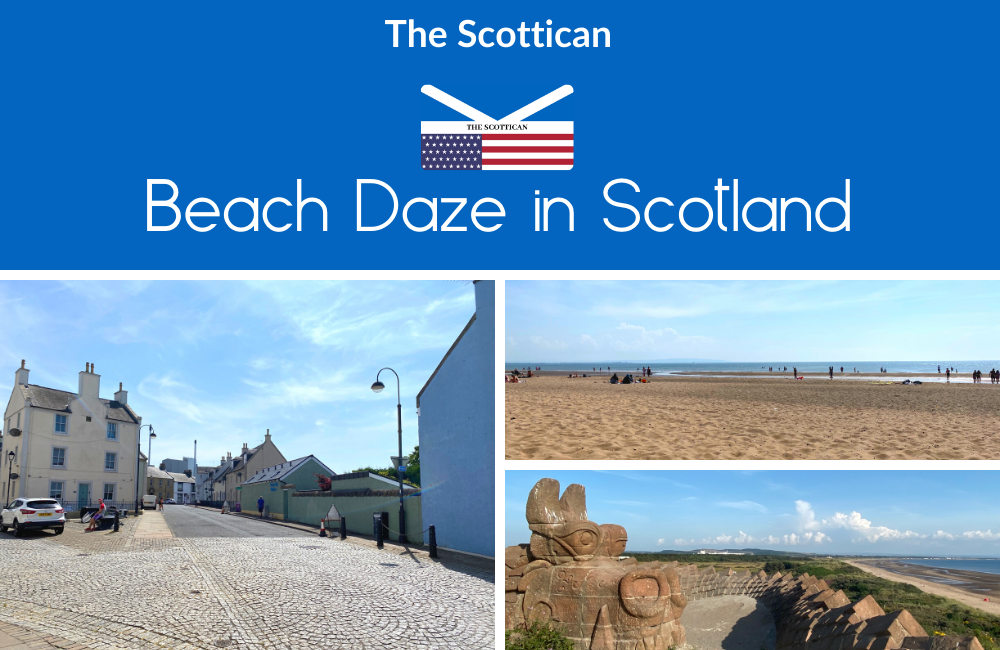 If you followed my social media in July 2021, you probably saw my post about heading to the beach. What you also might’ve noticed is me saying “I don’t care for the beach”. And it’s not a lie. I am a lover of the autumn, so hot heat in summer time can hit me hard. I don’t particularly care for getting tan—and I usually burn, as it is. And the beach? Well, I don’t really like donning a bathing suit and hopping in the water. Not really my thing.

But when I got an invite to have a girls day at the beach in the middle of stresses over dissertation work… well, we do need to take breaks. So, I decided to hop along and see what a beach day in Scotland is like.

For those who don’t know, Scotland does have a summer. Albeit, the joke is that we never know what two weeks that summer will hit. It could be a few days, here and there. It could last for a whole week—where there’s sunshine, heat, and no rain. But who can predict when exactly that will hit?

If you’ve seen my YouTube video about Weather in Scotland, then you’ll know that weather and seasons can be unpredictable here. But that’s true for a lot of places. Even if autumn hits on 21 September, that doesn’t mean we won’t have days that feel like summer, right?

But I do think if you’re going to experience heat in Scotland, you’re most likely to get it in the late June, early July time period. You may also get some hot days in August, too.

Also remember: Scottish heat is not American heat. Scotland sits higher on the globe than most of America, so the heat here is different. Again, in my Weather in Scotland video, I talk about this. The hottest days I’ve experienced in Scotland were high-70s (Fahrenheit) with a possible dip into 80 (Fahrenheit).

A lot of people might say this is comfortable heat. But it can feel rough in a country that isn’t meant to get super hot weather. The heat we had this past summer was often gross. I heard stories about animals needing to go to the vets due to it. Roofing materials melting from several hot days in a row. We must remember that just because some parts of the US can handle heat of 100 degrees or more does not mean other places are accustomed to that.

Scotland’s average weather is sort of akin to autumn weather in the States: maybe 50s to 60s (Fahrenheit). So a blistering sun several days in a row will affect the country.

But it’s still a must to enjoy the sun when you get it.

All that being said, let me talk to you guys about Irvine. Irvine is a town in North Ayrshire about 26 miles outside Glasgow. Walking around Irvine, there’s a lot to see. Formerly, it was a military centre and you can definitely get that feeling from the buildings and the architecture. But it’s also a big maritime hub as well. Some of the photos above showcase the walk from the train station to the beach. Yes, it’s a wee walk from the train station to the beach, but definitely doable.

And, I promise you, that sunshine and blue skies is NOT photoshopped!

Along the walk to the beach, there are some wee cafes and pubs, so you’ll be able to find some food and drinks if you’re needing it.

Now, on a nice day, you will find the beach CROWDED! It is a silent rule: you gotta enjoy the sun while you have it. Which is difficult for someone like me who doesn’t enjoy the sun, but—hey—you gotta be willing to try new things now and then.

As we continued to walk along the beach, we found some less crowded areas, where we set up our own spots for relaxing.

I’m gonna be honest with you: that water was FREEZING. I didn’t plan on swimming—as I said, I’m not a beach person. But not having proper beach gear—e.g., a real bathing suit or a beach towel—I got covered in sand, as it all stuck to my factor 50. So I did end up in the water. And despite that sun beating down without a cloud the entire day, it was BALTIC (as they’d say in Scotland).

I’ve been told this is not the norm, but it seems like good warning to give. Heads-up: that water could be so cold it’s not even refreshing on a hot day!

What? You don’t think “dragon” when you think of the beach?

Well, at Irvine, you should think dragon at the beach. Because there was one! This stone dragon is known to be the defender and protector of Irvine, as he looks out to the Firth of the Clyde.

Before we headed out to catch our train back to Glasgow, we climbed the dunes to meet it. And if you have a chance, I recommend you stop by. There are some great views from that dragon!

Traveling from Glasgow and Beach Etiquette

So, as I said, my friends and I were able to get to Irvine from Glasgow via the train. This was relatively easy. The train left Glasgow Central and it hit several stops before getting to Irvine. Just outside the train station was an Asda, where you can pick up snacks and drinks, if you need.

The walk to the beach was maybe 20 minutes to a half an hour. Again, this was not bad. Very doable and very comfortable. However, if you have a car and you prefer driving, there were places to park.

In terms of enjoying the beach, you are totally able to bring some alcoholic drinks, if you’re so inclined. But always be responsible with how much you’re drinking—especially if it’s a hot, sunny day. You don’t need to be drunk and also suffering from sun stroke.

But also remember: take your rubbish with you, please! It was honestly shocking to see how much rubbish people left behind—even when they were right next to a bin! So please be respectful of the location, of Mother Nature, and of Scotland herself.

Leave nothing but footprints.

Needs for the Beach

Don’t pull a me. Make sure you have a bathing suit and a beach towel. I made it work with what I had, but I do wish I’d had been better prepared.

So, make sure you actually have those amenities. It will help you enjoy the day more.

If you are lucky enough to have a day like we did, you are going to need sunscreen. I don’t care how little sunshine Scotland gets—take the factor 50 and use it! We barely had a cloud that day and I was so grateful one of my friends had some sunscreen to spare.

Use it and reapply after your swim. You can thank me later.

Again, another thing I wish I’d brought more of. BRING DRINKING WATER. Again, when the sun’s beating down on you, you might not realize just how much water you’re losing—even if you’re swimming. And if you bring alcohol, you need to water to balance it out.