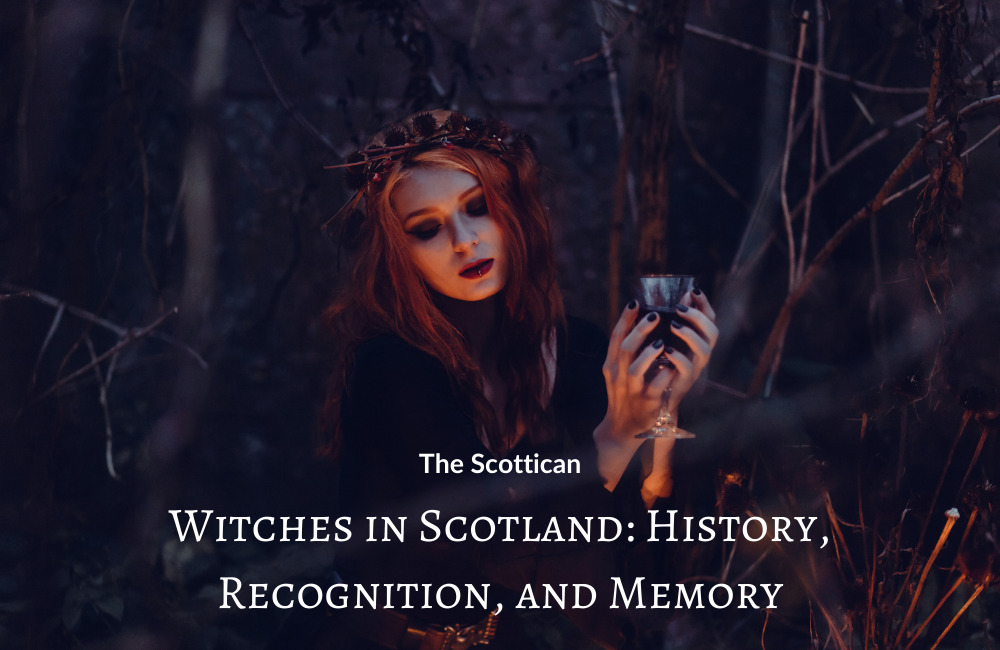 Do you like Scotland? Do you like witches? What about Scottish witches? Well, here’s an entry that has both—just in time for Halloween (or Hallowe’en, as written in Scotland)!

Reader, beware. History holds horrors abound, and the history of witches and witch hunts is no different. Let’s delve in to that history and then look towards a future that holds history in its memory.

The Scotsman reported that a List of ‘Scot Witches’ has been published online for the first time. While the list doesn’t contain all of the names those accused of witchcraft, the ones it does have been digitized and can be found at the Wellcome Library. The accused includes both men and women and their confessions, though 84% were women. Anywhere from 3,000 to 5,000 are estimated to have been accused. Witchcraft was not taken lightly and was a high crime in Scotland after the Scottish Witchcraft Act passed in 1563.

Now, I may have opened this entry a little jovially, but this is not a fun subject. It’s history, and a very horrifying history at that. Most remember that those convicted were burned or hanged, but forget this was not all that accused witches endured. Torture was commonly used to extract a confession—and if your thumbs are being subjected to the “thumbikins“, you’ll confess to anything to make it stop. These were just one of many ways to get that confession.

But it wasn’t just torture that people feared. Witch craze swept over Scotland. In fact, in Scotland alone, “the number of accused witches reached four to five times the European average“. It genuinely was a craze! It turned blood against blood, neighbor against neighbor. No one was safe as nobles and citizens alike were accused. Horror came in the paranoia that you didn’t know if you’d be next. And if you were, that brought on another level of fear.

Witch hunts get talked about a lot, but we often forget the horror behind them. It’s easy to get lost in the stories and start thinking of them as just stories. Then phrases like “witch hunt” become synonyms for things that really aren’t witch hunts.

Like most of history, it’s important to remember our dark times. In remembering them, we can ensure that they never come to pass again.

But do we need to do more than just remember history? Is it equally important to honor it and even make amends with it? Witches of Scotland seek justice for those women accused and lost during this time in Scotland. They have some fair points.

An article from the Guardian goes into greater details about these issues. It quotes campaign founder, Claire Mitchell QC, regularly. Around the world, convicted witches have been acknowledged and cities have tried to make amends with the history—a very bloody history that was horribly unjust to women. As noted by Feargus O’Sullivan in Bloomberg, society was rife with misogyny that believed women were more susceptible to corruption.

While Scotland has erected plaques to accused witches, Mitchell notes that they aren’t truly memorials, nor do they offer apologies. And if we are living in a time where we pardon the atrocities of the past, why not do the same for witches, most of whom committed no crime?

The campaign wants three things, listed directly on the About Us page on the Witches of Scotland website:

This begs the question: how much of the past should we hold on to?

I personally don’t think that people of today should be held accountable for the crimes of ancestors. No one today committed these crimes and I would hope that humanity has grown since the time of witch hunts.

But I don’t think it’s wrong if we, as a collective society, recognize a wrongdoing in our history and try to make amends. Germany does not hide from the Holocaust; it has several memorials to the victims and the loss. Angela Merkel has been quoted, “Remembering the crimes… is a responsibility which never ends.“

If we can commemorate war heroes, why not memorialize the victims and their pain? To remind ourselves what we never want to be again? If we believe that monuments truly teach history, then we have to face our bad history as well. And in the time of witch hunts, you see torture, cruelty, and paranoia run amuck—something I hope never happens again.

Further, witches are not a thing of the past. Many people today call themselves witches or pagans. To make right with this terrible past is to make right with the pagans of today, who may still hide due to fears of oppression. We can alleviate some of that residual hurt by simply recognizing it, acknowledging the wrong, and apologizing. This is what we do when we wrong a loved one; we can begin to bridge a gap and mend a wound with simple steps.

As I briefly mentioned in My Likes in Outlander, Druidry is part of my own spiritual practice. Druids are very much linked to witches and witchcraft. So I can say I believe the recognition can help.

What do you think?

I don’t need to tell anyone that the history surrounding witch hunts and trials is a harsh and terrible one that left many innocent people dead, punished for crimes they did not commit or for being a person dedicated to working with the land and nature and wanting to help others.

But Scotland has had an ugly history with witches. As stated above, Scotland’s number of accused witches is up to five times the European average. That’s a big deal when you consider the size of Scotland to all of Europe. Additionally, Scotland has its own Wikipedia page just on witch hunt history. It was a big deal for Scotland.

If you’re interested in more, students at the University of Edinburgh created an interactive map which provides more details on witch hunts throughout Scotland. That link opens to “death locations”, which it notes while “there were 3212 accused witches named, there are recorded places of death for only 111 of them”. Click through the menu items at the top for different maps.

If you want more information on the Witches in Scotland campaign, I recommend following their Twitter and checking out their website. I haven’t gotten a chance to listen to it myself, but I’ve heard their podcast is great.

To close this wee entry on Scotland and its witchy history, I leave you with a short video on the case of a specific witch—whose name might sound familiar if you’re an Outlander fan—who met her untimely demise in Edinburgh, told by Dr. Louise Yeoman.