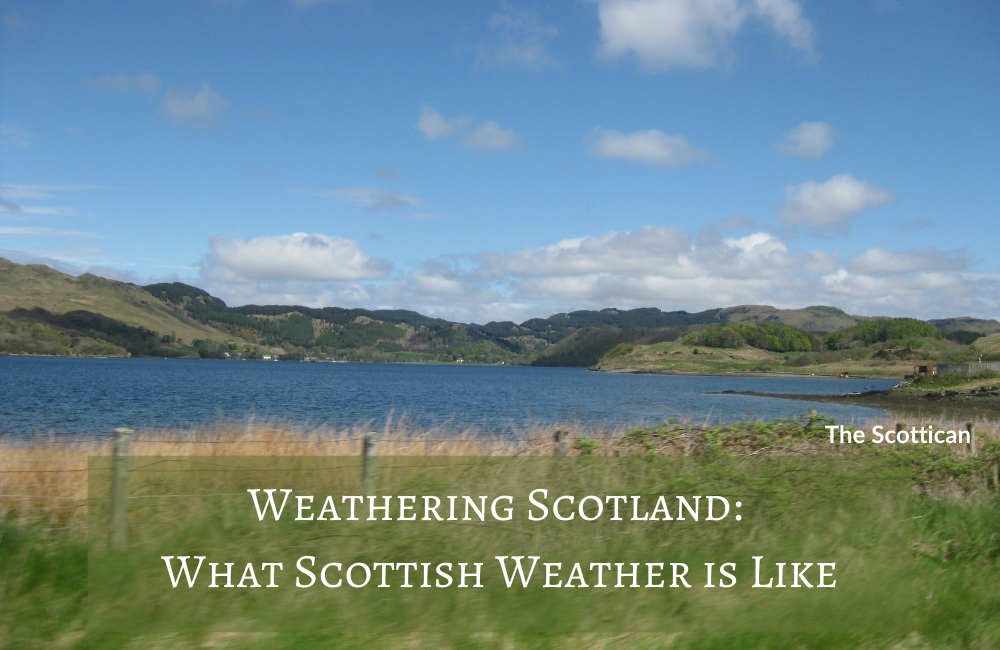 Earlier this week, I wrote about what clothes to pack for Scotland, so now let’s talk about what weather you should prepare for! This entry will give you an idea of what Scottish weather is like. I’ll break it down by season and talk about my personal experiences of each. So if you couple this entry with with the packing entry, you’ll have a full idea of how to prepare clothing-wise.

Without further ado, let’s chat about what Scottish weather is like!

A Note About the Weather

It is subject to change on a dime! I pointed this out in Packing for Scotland, and it’s worth repeating. You never know when the weather will change—for the good or for the bad. This is the biggest reason why it’s good to be prepared with layers. Have a spare hoodie in case it turns cold, knowing you can remove it when the sun comes back out.

It’s important to remember how quickly it can change. And, also, that there are never guarantees on weather. I’ve told people about sunny days in Scotland, and they get bothered at the rain they get. I’ve had the sun shining, but the wind gnawing. Scottish weather can be a little weird to plan for.

And while it can change daily—switching between the 4 seasons throughout the day—the seasons themselves can be temperamental. Some months have those in-between times, where you could experience either seasonal feel. The US is often like that, too. You’ll think that summer is starting to settle down, and—BAM—heatwave and humidity for a week.

However, Scotland’s temperatures don’t feel as extreme as they have been in the northeast of the US. I’ve never experienced 100°F days in Scotland, as I have in the summer in the States. And even winters in the States have felt more treacherous than Scottish winters.

So 1) be prepared for all kinds of weather in a single day, and 2) remember that your experience may vary no matter what season you visit.

Spring in Scotland starts around March/April, and temperatures range from 40°F to 55°F. You’ll likely see a bit of extra rain these days—because April showers bring May flowers, right? Though even in early March, when it was still very cold, I saw some daffodils poking their heads out.

For a March holiday, I would recommend heading out closer to April if you’re hoping for warmer weather. I snuck out at the end of February 2020 (before lockdowns) and it was freezing most days. Also keep in mind: the temperature might not factor in wind chill. And Scotland’s wind can be cruel. But around April, that breeze might begin to bite a bit less.

Another thing to note about Scotland during the seasons: how long the sun stays out. Because it’s farther north than most of the US, the sun’s schedule is very different. In the spring, the sun will start to stay out a bit longer. It won’t be strange to see the sun begin to rise at 6am and set at 6pm. So light hours can be roughly 12-13 hours as you go along the spring months.

Like in the States, summer is usually June through August. This is probably the most popular time to visit Scotland. It’s not just because you’re more likely to catch the best weather, but because there’s plenty going on. Summer is the time of the famous Edinburgh Fringe Festival, World Pipe Band Championship, and Highland games. There’s plenty to do during this season!

In terms of temperature, a typical summer is not going to reach 100°F. Rather, summer days are usually somewhere between 52°F and 64°F. Occasionally, you might have a day that reaches the 70°s, too. While living there, we may have had a day or two that reached the 80°s, but it was very rare.

Here’s the crazy part though: in the summer, the sun can stay out until 11pm or later! For many areas in Scotland, this can mean a 17 hour day, but in the north of Scotland, the sun actually doesn’t set during this season. Again, this is due to Scotland being so far north. So if you’re moving to Scotland, you might want to invest in blackout curtains for those summer months!

Autumn is my—and many others’—favorite season in the States. I was thrilled when I could smell autumn in the air while walking through Stirling. If you’re someone who enjoys taking a wander to see the foliage change, this is the time for you.

The average temperature is somewhere between 45°F and 57°F. Cool, but still comfortable. Pack some cardigans and hoodies. If you get caught on a windy day, it might be a little chillier. But overall it’s still comfortable for those of us that like cooler weather. I think Scotland’s climate of cooler temperatures is perfect; it definitely suits me, who wishes it was autumn all year round.

At this point, September through November, you will start to see the days getting shorter. The sun may be gone by 8pm and rise around 7am, so about 11 hours of daylight. Though I’ll say I did notice the sun was GONE by 5.30pm in November in 2012, so again your experience may vary. But remember when the sun goes down, the temperature drops. So those spare tops for cooler weather will come in handy.

And finally: winter. From December to February, winters in Scotland can be a crapshoot. When living there in 2012, it was cold and winter jackets were a must. In terms of snow, however, it was very minimal. But in 2018, Scotland was hit with “the Beast from the East”, which saw people unable to leave their houses for days. You can’t always predict that Scottish weather!

But you can be prepared. So winter coats and jackets are a must for Scottish winters. The average temperature will usually not exceed 41°F. And again that wind is brutal when it hits, especially in winter. This is still a great time to visit if you enjoy the cold air. If it’s a particularly snowy year, Scotland has hot spots for skiing and snowboarding.

But now let’s get to the real fun bit: the sun in winter time. Because I can tell you when I lived there in 2012, that sun was GONE by 3pm. According to TimeandDate.com, daylight hours in winter are about 7 hours. So you can take off those blackout curtains at winter time; you’ll have no issues falling asleep!

The biggest thing to remember about Scottish weather is that it’s ever-changing. With that, and the seasonal info above, you can decide when you want to visit Scotland based on your weather preference. Scotland will usually be on the cooler side, like autumns in the US. Hopefully, this has given you more of an idea of what Scottish weather is like, and can help you plan out the seasons and your visits.