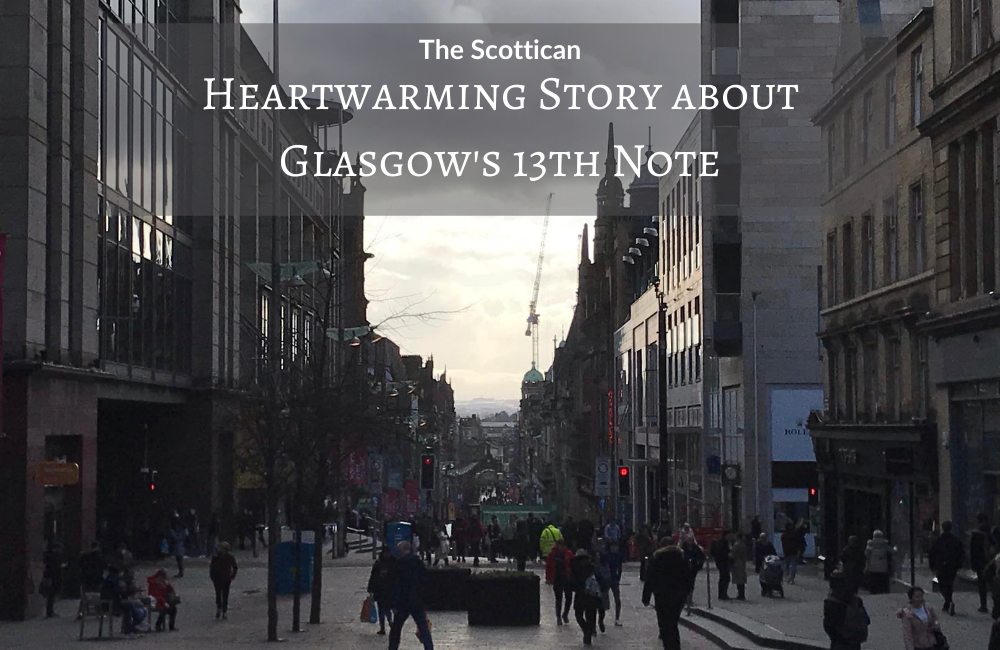 Last month, a friend shared a Reddit post with me that he thought I’d like. I got to see him during my last Scotland trip and we went to the 13th Note. I had had fond memories of this wee pub and venue, remembering the time I’d seen my friends’ band play there. To this day, I remember the “Not So White Russians” I drank during that evening. So my friend and I went to the 13th Note and I got to reminisce a bit.

Glasgow is a city that’s gotten a bad reputation for many years. It irks me when people—politicians and celebrities especially—put down Glasgow as being a terrible, violent place. I won’t deny the city has a past. And, heck, no matter what city you go to, you run the risk of hitting shady areas; no one can tell me that Glasgow is worse than NYC or London.

Glasgow is the city where I see genuine kindness from people. People who want to help; people who care. The motto “People Make Glasgow” is so very true. The above story isn’t the first story I’ve heard of kind, helpful people in the city. I see it every time I’m in Glasgow, whether it’s something like this; a person offering me help; someone chatting with and buying tea for a homeless person; or the stories of those who run to help after an accident, rather than running away for safety.

These are kinds of people I know Glaswegians to be, so the Reddit story above truly warmed my heart. I wanted to share it here in case anyone else hadn’t read it. Or in case others want reminders of the goodness in the world; I think we’re all in need of more stories like that.

A Glasgow resident popped into the 13th Note to get a drink after a tough day of looking for work and to pawn a guitar. After the man’s card declined, the bartender gave the man his drink and also a plate of chips (fries). The man was so moved by this, as he had been affected by the COVID-19 lockdowns. Just a wee story and shoutout to a pub that did something kind for another person during a time of struggle, in hopes that others will show them support in this difficult time.

If you venture into the comments as well, you’ll find the server responded. She herself says that when she came to Glasgow, she didn’t have much herself, but she got to where she was today by the kindness of strangers.

Don’t let anyone tell you Glasgow isn’t a great city.