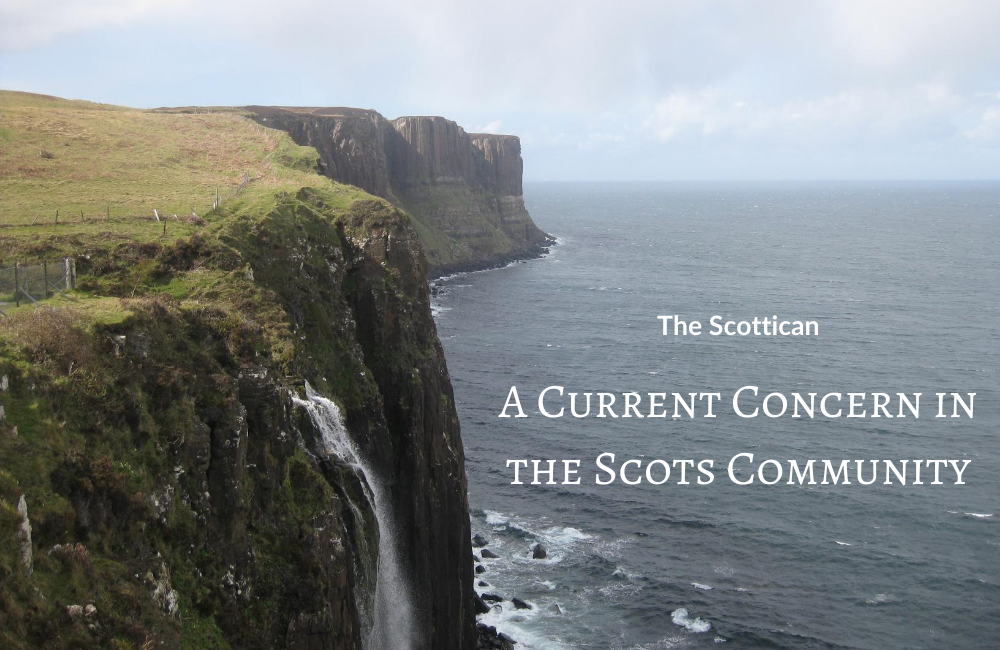 There has been a big stir among the Scots speaking community regarding the Scots Language Wikipedia. It’s come to light that all of the content on it was written by an American teenager who doesn’t speak Scots. And many believe that this has done harm to the language. I’ve been reading through some of the comments on a Reddit post, sent to me by a friend. I wanted to comment on the issue, and also clarify some things from the video I posted on Scots.

This is obviously a big deal, especially to those very involved in the Scots community.

I’m not going to assume what this person’s motives were. This teen could have been someone passionate about Scotland and the Scots language; he could have thought he was contributing in some way. I get that.

But you can be passionate about something and want to contribute, and still do harm if you’re not doing the research. I’ve seen people copy and paste stories into Google Translate and publish a Gaelic children’s book with whatever came out. I can assure you, even with my rudimentary Gaelic, that what came out was not correct Gaelic.

It’s similar here, but with the added issue of Wikipedia being free for use and a resource that many use as a starting point for more information. When that information is vastly incorrect due to lack of research, it hurts that topic.

With Scots being a language that’s constantly under target of being “not real” or “bad English, the damage inaccuracies can cause is heavy.

I do applaud effort and a desire to help. But that effort and desire also need to be accompanied by research. You don’t need to write a dissertation on the subject or be a world renowned expert. But if you’re going to be managing the pages on the Scots language, you need to have more information and insight than this teenager had.

Once this came out, there were a few suggestions on what to do. Some called for a complete deletion of all of the Scots Wikipedia. Others instead called just for the removal of what the teen had written.

But it sounds like Michael Dempster, director of the Scots Language Centre, wants to rework what the teen has done. In a quotation from the Guardian:

We know that this kid has put in an incredible amount of work, and he has created an editable infrastructure. It’s a great resource but it needs people who are literate in Scots to edit it now. It has the potential to be a great online focus for the language in the future.

Michael Dempster, director of the Scots Language Centre in Perth

In this way, the resource can now still exist, but will be edited by actual Scots speakers. This has the potential to improve the Scots Wikipedia and make it a good, legitimate space for Scots readers, speakers, and enthusiasts.

Currently, Dempster is determining how to arrange a group of volunteers to assist in overhauling the Wikipedia content. If you have fluency in Scots, this might be an opportunity to help promote the language and its growth. Get in touch with Dempster if you think you can help!

Additionally, if you have an interest in Scots yourself, he’s also made available a series of YouTube videos to help learners. Also, follow Michael Dempster on Twitter if you haven’t yet, especially if you’re also passionate about Scots.

My Own Personal Knowledge

All the above is coming from someone who’s been in similar shoes. I know I am not fully knowledgeable about Scots. I still have the open online course that I need to finish. I’m not a native Scot. And my exposure comes mostly from the internet, which is always flawed. I’ve only just recently become more aware of the Scots community out there and have been paying more attention to it.

Before I started looking into the Scots Language world a bit more, I thought of Scots solely as a dialect. I thought about how my Glaswegian friends spoke and would write Scots in that way. I have written stories that I thought were Scots in this way. It really wasn’t until I started working with the Open University course and following the community on social media that I realized how deep the rabbit hole goes.

So I can’t say I haven’t been where this teenager is in terms of the language. And it’s especially difficult with it feeling like there are so few resources. Something I played with to get a feel for Scots when I first started looking into it was ScoTranslate.

DO NOT USE THE ABOVE RESOURCE if you’re wanting to see actual Scots. It was fun to fiddle around with for a bit, but it does not translate into legitimate Scots. It seems to spit out phrases as you’d hear them in Scottish accent or dialect rather than the actual language.

The more you delve into the Scots community and learn about the language, you realize it’s much more than just an accent.

If this is all you find on the internet in regards to translating or learning Scots, your knowledge on the language will be flawed. I recognize this about my own past experiences with Scots, which is why I’m working to learn more.

My Video on Scots

In all this talk, it’s had me thinking about my video on Scots and whether or not I was clear on some of my thoughts. Was I too vague? Was what I said unclear? Or worse: did I contribute to ignorance regarding the Scots language?

If I did, I do apologize. My goal was to give those who had no familiarity with Scots as either a dialect or language some insights. But I also wanted to voice my support for Scots as a language and how it should be preserved and used.

In doing that, I recognize that some of my words may come across as simplifying Scots, which wasn’t the intention. I do believe many people can learn Scots through listening and exposure, and educating themselves. But it is a language, which means it requires time and effort.

Is Scots as simple as hearing “deid” instead of “dead”? No, but I’m hopeful that wasn’t the main takeaway from the video. Watching the few Scottish shows that are available on Netflix will not teach you Scots, as it’s not fully Scots that’s being spoken. But you can hear the accent, which many find difficult to understand at first, and you can hear occasional words thrown into the mix.

I do still think this is of the best ways to start familiarizing yourself with Scots: listening and hearing Scottish people speak. Still Game and The Limmy Show might not have Scots as a language, but it will help get your ears acclimatized to the Scottish voice and accent. That, to me, is step 1 before delving into the language that is Scots.

All this to say that I’ve been paying attention to what’s being said in this story. From friends who have sent it along to me to Twitter chats about it, I think it’s an important conversation. It’s important for Scots as a language; for the person who ran the Scots Wikipedia; and for all of us who have any level of interest in it.

For myself, it felt like a time to confront some of my own lacking in knowledge. I wrote stories in Scots a year or two ago; I always meant to go back and look at them. But with how much I’ve learned about Scots, even within the past few months, I know there’s still so much to learn. And I do try to be someone who owns their mistakes and learns from them.

I hope this teenager can take the criticism coming his way as a way to grow his interest in Scots, if it’s genuine. I’d hate for him to lose his passion if he had it; I sincerely hope he realizes he has more to learn and takes that on.

But time will only tell.