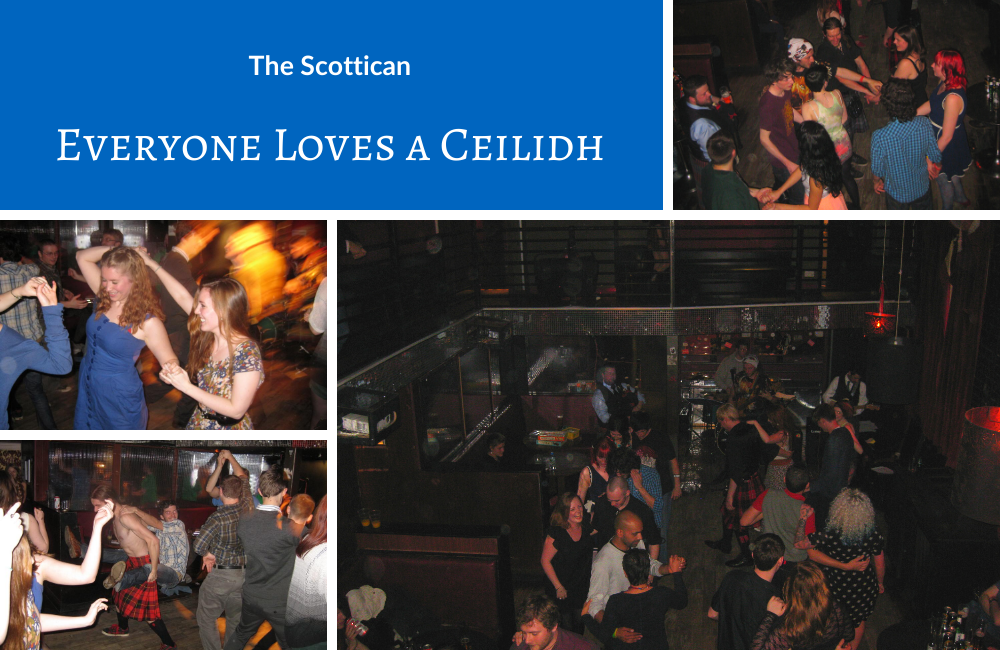 Well, everyone SHOULD love a ceilidh!

But if you’re American like me, you might not have grown up with ceilidhs. You might not even know what they are! I didn’t before going to Scotland, but I’m thrilled I’ve gotten to know them. So let’s get you introduced to Scottish ceilidhs.

A little more about me as a person: I like dancing. I won’t say I’m great at it, but I find dancing to be the most enjoyable form of exercise (along with aerial silks; man, I miss that). When I was living in Stirling, I got dragged to a club one night. It was your typical dance club: music that wasn’t my cup of tea, too loud to hear anyone, and most people just looking to go home with someone. I’ve got nothing against that if it’s your thing, but it’s not really mine.

A Scottish friend suggested I find a ceilidh. Why? Well, I liked Scotland and Scottish culture, and I liked dancing, but wasn’t the biggest fan of clubs. Ceilidhs seemed like they might be a good fit for someone like me.

I am so glad I took that advice.

I don’t have too much history to give you in terms of ceilidhs, but I can give you a wee Fun with Gàidhlig section here. Ceilidh (pronounced kay-lee) is a Gaelic word that usually means gathering or visit, and is often used as a verb. In this way, ceilidhing might be accompanied with socializing, singing, and dancing.

While this is still a common Gaelic term, one you learn in DuoLingo for Gaelic, today ceilidhs are more closely tied to the dances. They are associated to both Scottish and Irish culture, and are popular to this day. Many weddings still feature ceilidhs as part of the celebration. While in school, many children learn the ceilidh dances and their steps, so they are very much part of Scottish life for people of all ages.

A ceilidh will vary depending upon who’s hosting. For example, a ceilidh hosted by a church will be different than one for a school or university. So, your own experience may vary.

I been to one type of ceilidh: Big Stupit ones. More on that later.

To my fellow Americans who’ve never heard of ceilidhs, a good comparison would be square dancing. Which might lead you to think ceilidhs are for squares. But I assure you: they’re not!

Many of the dances require a partner. If you’re new to ceilidh dancing and if you’re lucky, you’ll get a partner that knows what they’re doing. But even if you don’t, don’t let that deter you. The band should have a caller who explains the steps of the dance before the music starts. You’ll get a round or two to practice—then you’re off!

When the music’s playing, it makes it that much harder to remember the steps! It becomes a race between your brain and feet, as one tries to recall the steps and the other tries to match the music.

Expect to look stupid. Because trust me: you will! It’s part of the fun—the chaotic fun. Even if you know the dances by heart, you’ll still look silly, simply because everyone else does.

At least, this has been my experiences with ceilidh. As I said, I’ve only been one type of ceilidh. I can’t comment on church ceilidhs or school ceilidhs, but hopefully I can interview some Scots some day and get more insight into those.

I started this entry mentioning a friend who’d suggested I find a ceilidh—and I did just that. In November 2012, I found one at the Buff Club in Glasgow. It’s among my top memories—along with each ceilidh I’ve gone to since—and definitely contributes to my love of Glasgow. I hinted at it a bit in my Falling in Love with Glasgow entry.

The ceilidh was a blast! I spent the entire night laughing, feeling incredibly silly at how bad I was at these dances. It constantly felt like I’d be flung into the band as I spun with partners. I was on my feet most of the night, and was incredibly sore the next day—but it was well worth it. My favorite dance has got to be Strip the Willow, but at a Big Stupit Ceilidh, the Gay Gordons will be the most memorable.

The energy of the evening was lively and fun; the Big Stupit Ceilidh Band’s style felt like it combined both traditional Scottish music with a rock energy. I think that added to why I enjoyed it so much: it felt both Scottish and modern—and young, which worked for me and my friends, as we were all in our early- to mid-twenties at the time. The energy of the evening is one of the biggest reasons I love those ceilidhs and wanted to go back. Other friends had attended other ceilidhs, but they said never did measure up to feeling of a Big Stupit Ceilidh.

I attended another in January 2013 and then in June 2013. The last one I got to attend was June 2016 for a friend’s 30th birthday. All were hosted by the Big Stupit Ceilidh Band. I am, indeed, very spoiled.

If you get an opportunity to go to a ceilidh: do it! Don’t worry about looking silly or not knowing the dances. I do not remember a single one of these dances, but I’d still be at a ceilidh in a heartbeat.

Ladies: avoid heels. You’ll be moving and dancing a lot, which can get very uncomfortable very quickly.

Lads: if you’re heading off to a wee ceilidh, why not wear a kilt? When in Scotland, do as the Scots do! And who doesn’t love an opportunity to wear a kilt?

A Note on Kilts vs Plaids
As mentioned in my Huv Ye Seen It: How to Wear a Plaid (Kilt) entry, there is a difference between kilt and plaid. The kilt is the single piece that wraps around the waist that we see most modern Scots wear at formal occasions. The plaid is several yards of fabric that an individual would pleat themselves before belting the fabric around the waist. The appearance is similar to a kilt, but it allows for extra fabric to wrap around the shoulder, as we often see Jamie Fraser wearing. The tartan is the pattern on the kilt or plaid. See entry for video of Andy the Highlander demonstrating how to put on the traditional plaid.