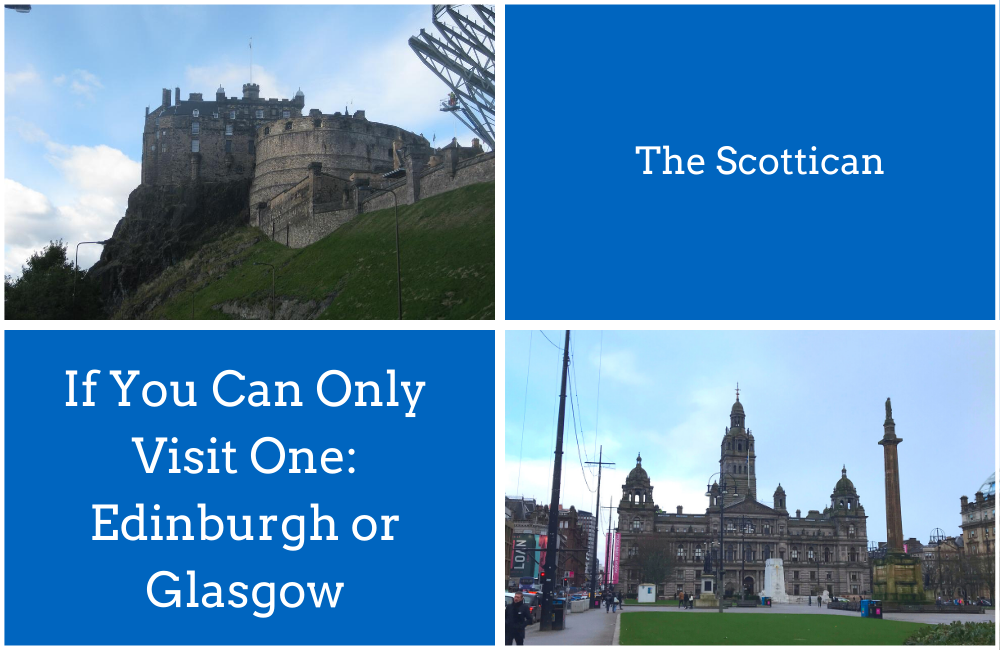 Edinburgh and Glasgow, Scotland’s two biggest and most famous cities.

Edinburgh, the capital, vs Glasgow, the most populated.

I normally would never pit these two against each other. Both are absolutely wonderful cities with their own uniqueness and history and sights. If you have the opportunity to, you should definitely attempt to see both, especially if you’re interested in Scotland/Scottish history.

But I want to try to help those who have a limited time to spend in Scotland and can only visit one of the cities. I’ve had people ask me this a few times, so I’m going to provide the advice I often give to those who ask.

What I usually try to do is provide information to let people make their own decision. If you know me personally, or if you’ve noted it from some of my entries here, I do have a preference between the two, as most people who visit both end up having. But when it comes to giving advice to which people should see on their own, I try to provide as unbiased of an opinion as I can. After all, my favorite might not be everyone else’s favorite—and that’s totally fine!

The first time I stepped foot into Edinburgh, I was in awe of the city. Walking past the various stores, debating on going in for a shopping spree, but then immediately turning to climb the steps of the Scott Monument. Admiring a genuine castle from a cafe window. Staring in wonder at rows of houses and building, architecture I’d never seen the likes of in the States.

I’ve heard people say that Edinburgh feels like it could be a mini- but fancy-London. I personally don’t see the resemblance, but then again I wasn’t a big fan of London. But Edinburgh can certainly feel posh and stylish to visitor.

What I’ve told people is that Edinburgh looks like a city designed for beauty and uniqueness, and that’s often what pulls people to Edinburgh.

If you’re looking for a city of both ancient and modern beauty, go with Edinburgh.

Glasgow, conversely, is very different—both visually and in its feel, too.

Visually, you can see so much industry in Glasgow. It’s one of the reasons my mom didn’t enjoy Glasgow when she visited decades ago. And, yes, Glasgow is very industrial-looking in certain areas. There’s no denying or hiding the industry that built Glasgow. And we shouldn’t want to, as it’s very much part of Glasgow’s own unique history.

But the visuals of all the offices and factories remind me that this is an active city. It’s not something on display for tourists; people really live and work and make this city thrive. Obviously, people do the same in Edinburgh, but in Glasgow, it feels real.

Even the architecture has a different feel to it here. Certainly, Glasgow is also an old city, but it feels more modern. When I’m there, I feel like I’m part of the world today, not like I’ve stepped into history.

Edinburgh feels like a city of fantasy. It’s a city I feel I could’ve daydreamed with its ancient beauty combined with modern essentials. And some days, you want to live in a fantasy like that—especially if you’re on holiday. So if that’s the feel you’re looking for, or if you’re looking for a place that feels like it was made to be visited, go for Edinburgh.