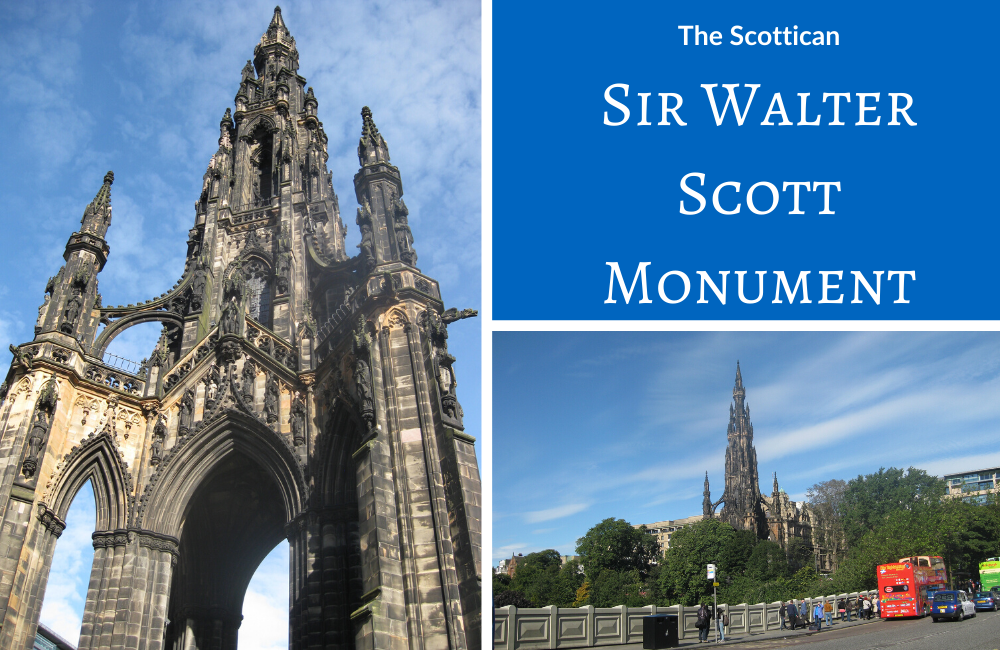 If you’ve been to Edinburgh, no doubt you’ve seen the impressive Sir Walter Scott Monument. It’s pretty hard to miss! It’s such iconic piece of Edinburgh’s landscape, and its unique architecture really makes it stand out. But did you know you can also climb to the top of this Scottish monument?

I’ve made the climb twice and I have a handful of pictures to show off! So strap in for a virtual climbing session!

Well, first and foremost: we can’t talk about this monument without talking about who it’s named for. Sir Walter Scott was born in Edinburgh in 1771 and was a prolific writer in his time, penning poems, fiction, and histories alike. Some of his more famous works are Ivanhoe, Waverley, and Rob Roy.

Scott is considered a key figure in establishing the historical fiction genre, being both a fiction author and a historian. He also a member of the Highland Society, which was formed due to struggling communities in the Highlands, leaving many without food. The society’s formation occurred in 1784 when there was a renewed interest in Highland life and culture; remember that several decades earlier, following the Battle of Culloden, much of Highland heritage was banned, including the wearing of the plaid and the use of the Gaelic language.

Scott was well-known in his lifetime as an author and scholar, and liked by many. To this day, he and his works are still celebrate in the form of monuments and street names around the world. He passed away in 1832, aged 61.

It was decided in 1838 that a monument would be constructed dedicated to Scott, but it wasn’t completed until 1844. It stands just over 200 feet, which takes 287 steps to climb to the tallest platform.

Before climbing the monument, you’ll see a statue of Sir Walter Scott himself sitting beneath, along with his dog Maida. And while this monument is named after him, he is not the only figure celebrated upon it.

The monument is carved in the Victorian Gothic style. The design features carvings of 64 characters from Scott’s works, all of which were carving by Scottish sculptors. In addition to these, there are also carved heads of famous writers and poets, including Robert Burns, George Buchanan, Lord Byron, and Mary Queen of Scots.

There is also a museum room, which can be found on the first floor, offers a deeper look at Scott and his life and legacy.

If you haven’t climbed to the top of the monument, you’re in for a treat. But remember: that treat has to be earned!

Climbing the Scott Monument isn’t the same as hill-walking, but it does present its own challenges. Like the William Wallace Monument, this monument has a very narrow, winding stairwell.

As stated above, there are 287 steps—and that’s just to get to the top! It doesn’t factor in the climb back down, which can feel equally treacherous, especially if you meet someone else in the stairway.

This should only make you reconsider a visit if you’re a) very claustrophobic and/or b) sensitive to heights. If you’re in Edinburgh and you want to see the best views of city centre, then it’s definitely worth the climb.

There are several levels to climb to in the monument, each of which offers a grander view of Edinburgh—because each view brings you higher!

I’m going to try and add these pictures by groups for each level, going up one level per batch. I’m hopeful I get the photos correct, as I didn’t label them. And please excuse some of them; I’m not a professional photographer, and 2012-me didn’t know that 2020-me would be starting a website using some of these photos. 2012-me was just excited about the great views and seeing more of Scotland.

Now this final shot is NOT mine, but I had to share it. It’s a panoramic of Edinburgh as seen from the top of the Scott—and it’s too beautiful not to share:

As of writing this, the Scott Monument is still closed. Considering how tight the confines of the monument can be, this does make sense. So don’t make any plans to go see it just yet; it’ll likely take a bit more time before it can safely reopen.

However, you can take time to familiarize yourself with Sir Walter Scott by reading his works—many of which are available on the Public Domain.

Additionally, earlier in this entry, I wrote about the climb and how it’s worth it when you reach the top. I wrote a piece with a similar theme—where I also briefly mentioned the journey up the Scott Monument—in my To Scotland book, which is now available to buy and review on Kindle and rate on GoodReads. Check it out if you’re interested; the story called “The Climb” is the one I’m referencing.

Cleaning through my house, I found the souvenir I got from climbing the Scott Monument the first time! Since I knew this entry would be going live, I thought it would be a fun piece to share.