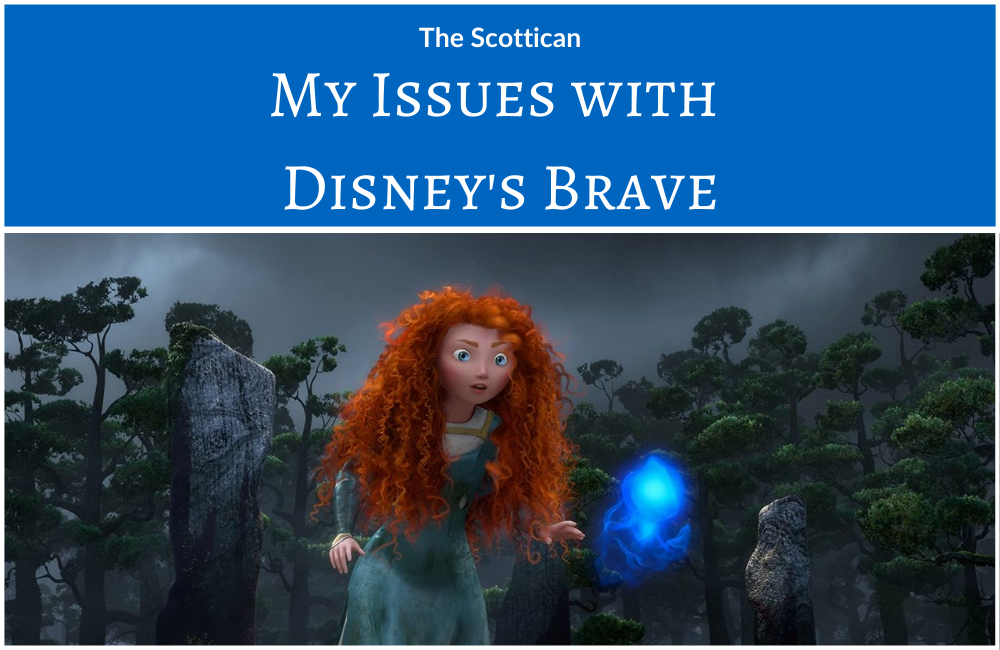 Moving right along with the Brave theme, I think it’s only fair to talk about my issues with the film. After all, I did cover both likes in and struggles with in Outlander.

I’m phrasing it as issues—similar to how I phrased it as “struggles” with Outlander—as they’re not entirely dislikes. Sometimes, it’s personal conflicts I have that bother me, but don’t hinder the story. Sometimes, it’s something I view as an error. Sometimes, it’s just things I would’ve liked seen done differently.

In the case of Brave, it’s gonna be primarily:

My biggest conflict with this film was simply: I wanted more. And this might encompass ALL of my conflicts with the film.

There were so times where I felt like this film wasn’t complete. It tells a full story from start to finish, but there were times where it felt like they would open up another storyline, and then do nothing with it. Or that more could’ve been done to create a stronger story.

And I don’t mean I want a sequel—not unless we’re guaranteed something new, original and well-written. I mean that it often felt like they only touched on themes or subjects, but didn’t go further than that.

I felt the brothers were underutilized, and could added much more chaos and hijinks to the film as well. I don’t think they necessarily had to have voices, but that equally highlights how little of a role they played in the family. Further, since we see so much of Merida and her mother, playing on the mother-daughter theme, let’s see Fergus interacting with his sons more as well. It would be an interesting take to see what the father teaches the sons while the mother guides the daughter.

Fergus was another character who felt so underutilized. He would encourage his daughter’s less-than-princessy loves while also supporting his wife in the decision of Merida marrying (and who could argue with a man who stands by his wife?)

But I would’ve loved to see Fergus be more of a character who could’ve helped tamed those tensions, which would have subverted that clueless dad/husband role. He could still be a fun, happy, loving character, while also revealing he’s paying attention more than you realize. I’m not arguing a complete rewrite as a character, as I genuinely liked him. But adding even a handful of subtle comment and remarks to show he’s not blind or obtuse to the struggles between mother and daughter would give that character a little something extra.

Even the clan lords felt like they had very little scene time and things to do in this film. This includes their sons and the visiting clans. The sons were there to win Merida’s hand, which felt like a pivotal plot point, and yet we barely hear the sons speak.

But I understand a big part of that is… that’s not the story, even though it’s a major occurrence. The story is about mother and daughter learning to see each other’s points of view, and respecting and loving each despite differences.

Still, I like these characters and it would’ve been nice for them to have something more to do.

When Merida told her family that she climbed the fire falls, her three brothers gawked at her in shock, while her father said only the bravest warriors do that.

But that warrior strength aspect for Merida doesn’t really come back up, as the rest of the story is truly a mother-daughter saga. Which, as I said, I liked, but there were puzzle pieces that were revealed that never actually fit into the final picture. Let’s see more of Merida being a warrior and proving her skills!

This aspect is just one example of where I would’ve liked to see more action. It almost feels like the start of the film is telling a different story than the middle and end of it. And I wonder if that has something to do with production changes—which I’ll write more about below.

More from the Story

Some of the plot between Queen Elinor and Merida feels a little rushed. Every story needs a timeline, and as a writer of fiction myself, I get that. But two days to determine how to change Elinor back seems like a strange choice; traditionally, that number is three. Was there a purpose to that choice other than to finish the film and shorten the time on it?

In addition, as I’ve mentioned in the previous sections, sometimes the story feels like it’s struggling to find its footing. The first half of the film has a different feel to it than the second. It’s not bad, but it’s something you can recognize. And this, again, might be attributed to those dang production changes which I’ll get to in just a sec.

Guys, it’s just who I am! I love seeing Scottish humor, banter, and culture on screen. I love seeing it shared and celebrated. And there was quite a bit of it in Brave, so I must give it credit.

But that’s exactly why I want more. Go big or go home! Highland games are in the film, but let’s also get a ceilidh in there before the clans leave!

Bring in more Gaelic. We hear one or two words of it in a flashback when Elinor is singing to wee Merida; there’s definitely room for more!

Also, this is a story about magic in Scotland—so bring in some more Scottish mythology and monsters! Get Nessie in there! She’s been associated with Scotland forever; she deserves being in a Disney film!

There’s already so many allusions to different pieces of Scottish culture and history (though not all from the same time period), so why not do more?

Remember earlier when I mentioned production changes? Let me talk about that a little here. In the middle of working on this film, the original director, Brenda Chapman, was replaced by Mark Andrews. It’s not quite clear why that happened, but it’s likely that with such a shift in directors, the ideas being put into the film changed.

This could attribute to plot and story feeling disjointed occasionally. Perhaps one director felt they should focus on Merida being a warrior, while another felt it more vital to build the mother-daughter story. The original intent was for it to be a mother-daughter film, but when directors change, the tone and story can shift as well.

And these shifts can affect everything. So perhaps this is a reason why even characters felt underutilized. But it doesn’t change the fact that I want more.

I feel like if there had been more cohesion—perhaps if there wasn’t a change in directors during production—then Brave would’ve gotten the attention and credit it deserved.

But I also have to acknowledge that I don’t know all the details of that. I like strong, independent Merida who’s not interested in romantic love at her age; I wish I had a Disney princess like that when I was young. But perhaps originally, she wasn’t meant to be that—and if that’s the case, then I’m glad it was changed. Again, we don’t have all those answers.

Overall, I felt like the film introduced some great things and gave an insight into Scotland and culture, but I wanted to see it amplified. Don’t open up topics or scenes if it comes to nothing in the end—like Merida and the fire falls. If we’re doing some of Scottish culture—which is big in this film—bring in as much as possible to make it more real. The film didn’t need to be historically accurate, but if we’re having a Disney film set in Scotland, I would’ve loved to see as much Scottish culture represented as possible.

But that might just be the Scottican in me.