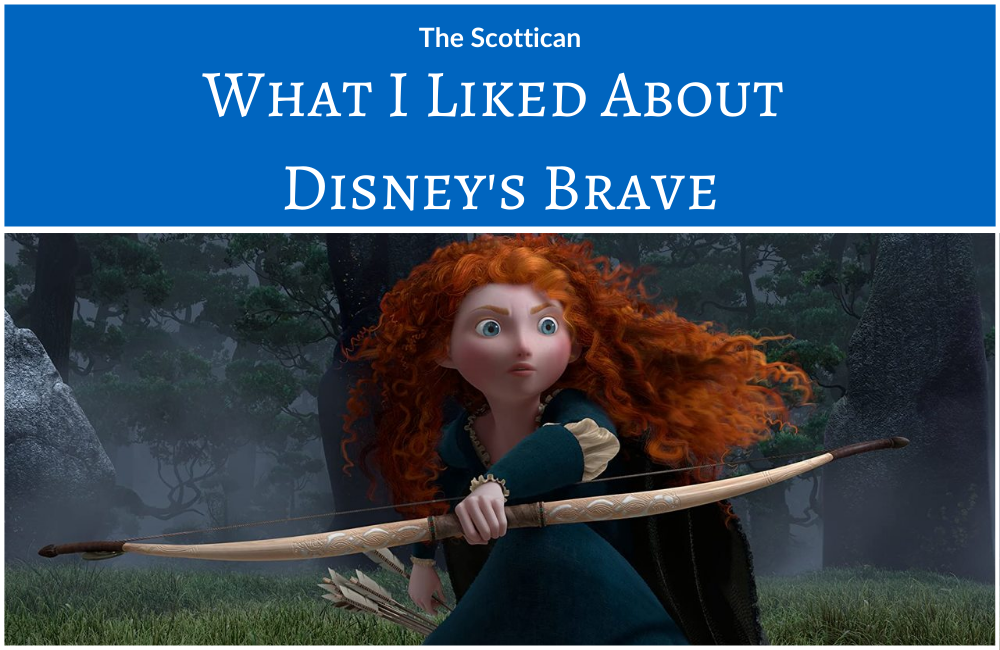 Earlier this week, I wrote about Disney’s Brave. If it’s not obvious, I loved getting to see this film, but I wanted to talk about some of those big why’s.

Let me also note that I’m realistic about this film. I enjoyed it, but I feel there are a lot of ways it could’ve been improved. I even feel there are some parts that are lacking, but I’ll cover that in another entry.

For now, I really just want to gush about what I liked Brave.

Merida and Her Personality

I love Merida herself. She’s such a badass! And the second I realized the whole story was about a princess who genuinely just isn’t ready for love, I was jumping for excitement. I would’ve loved to have a princess like her around when I was a kid.

Not that I’m someone who thinks all Disney princesses are just looking for love. So many of them had other characteristics and just sort found love on the way, which is beautiful and wonderful because it’s often how life is.

But it was refreshing to see a princess who wasn’t seeking out any of it; who just wanted the space to be her own person, and have the decision to find love in her own time, if she even wanted it—and her insistence on this didn’t waver or change by the end of the film. I admired that in this film.

I mean, have you seen this website? If there’s something that celebrates Scotland out there, I want to know about it and I’m confident I’ll love it. It’s no different for Disney’s Brave.

The art design in this film is wonderful for an animated film. It’s something we’ve come to expect from Pixar films, and usually they don’t disappoint.

I love the shots of the woods and tall trees. When wee Merida runs into the woods to retrieve her arrow and comes across the wisp for the first time, I thought the artwork in both the forest and of the ethereal wisps were beautiful.

This continues throughout the entire film—as older Merida gallops through glens on her horse Angus; to her climbing the fire falls and drinking its waters; to the impressive Ring of Standing Stones that lead Merida to her fate. These are all impressive feats of art design, and I think they definitely did justice to the beauty of Scotland.

I’ll admit I do have some issues with the story, which I’ll talk about in the conflicts section, but I love the mother-daughter tale being told here.

Yes, I adore independent Merida and her journey to find herself without romantic love, but I also like seeing the story of a mother and daughter working on building their relationship. It’s very true to what most girls of Merida’s age go through—thinking your parents don’t care or don’t understand.

So to watch them slowly see each other’s perspectives, even in the midst of Mama Bear becoming an actual bear is a fun way to show that growth through magic.

Further, I loved seeing Merida’s family act like a family. We would see that both of her parents clearly loved one another, and that Merida herself was very loved, if misunderstood. And even her brothers, while being mischievous, were also very much cared for. It’s nice to see that family dynamic portrayed in this film. There haven’t been many Disney films that show this loving family dynamic.

Further, aside from family conflicts or adults not understand the children in their lives, no one really put anyone down. I admired scenes like Fergus addressing the clans, but struggling with his speech, and Elinor promptly stands up to help; she doesn’t mock or put him down, nor does she comes across as superior or overbearing. Rather, she adds to his strength. The characters complement each other in ways like that.

Elinor herself is a badass like her daughter, though in a different way: she owns herself as a woman and queen, in a way Merida hasn’t evolved to yet. I loved the scene of Elinor walking through the crowds of fighting clans, who stop fighting and part as she walks past. She says nothing during this scene, but owns the respect of every person she walks near—to the point where they stop their behavior. I love seeing that.

I also adore Fergus. He was so fun and jovial, and was genuinely presented as a good-natured man. His love for his family shows, and I loved that.

Props for actually getting Scottish actors in a lot of these roles!

Merida herself is voiced by Kelly Macdonald. Her father, Fergus, is voiced by Billy Connolly. Robbie Coltrane, Kevin McKidd, and Craig Ferguson took on different heads of the clans. Emma Thompson, who was born in London, voiced Merida’s mother, Elinor, and Julie Walters—also English—portrayed the Witch.

I think it’s pretty impressive to see so many born and bred Scottish actors in these roles, and I feel it adds to the authenticity.

Again, this is probably an obvious one judging from my website, but I thought all the little nods to Scottish culture were fun. The “wear nothing under the kilt” gags; Lord MacGuffin’s son who spoke Doric; all the bagpipes playing, especially during fights; the sayings and Scottish ways of speaking; the occasional use of Gaelic.

From the environmental music filled with pipes and sounding so Celtic, to the songs sung by Gaelic singer Julie Fowlis. Brave is not known for its music because it’s one of the few Disney films where the princess and co do not sing, but that doesn’t mean it’s not accompanied by great tunes.

Though if you do get the album, there is a song sung by Fergus and fellow clan lords called “Song of Mor’du”, and that’s filled with fun Scottish themes. Give it a wee listen!