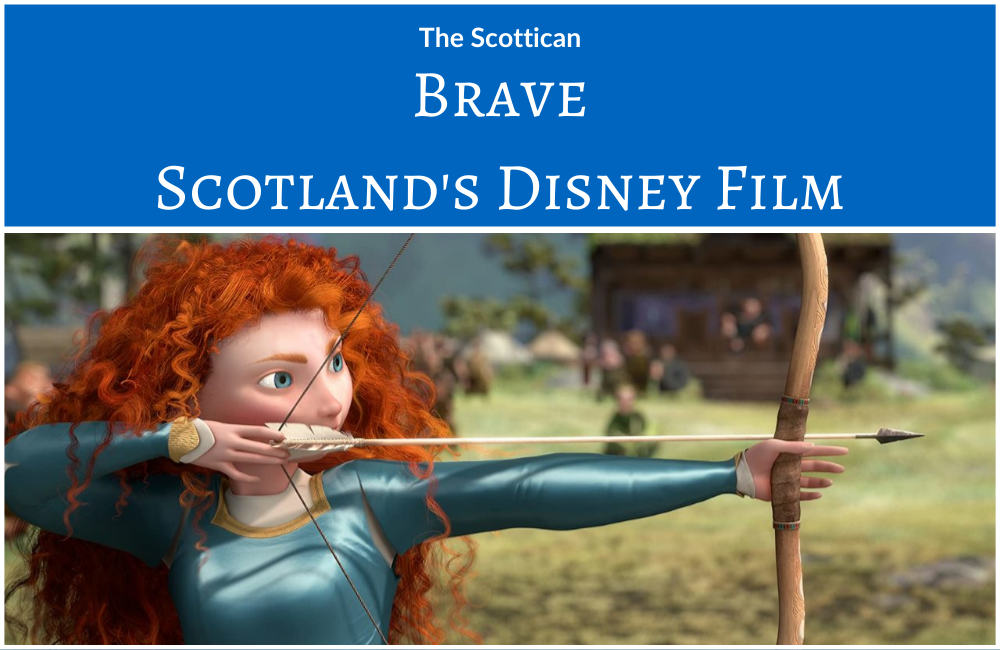 Seriously, I saw it 4 times when it was in theaters. It was the summer before I left for Scotland, and there was an actual Disney princess who was Scottish. Can you blame me?

I’m talking, of course, of Merida.

I originally had an entry that was pretty damn long that included my likes and conflicts with the film, but I decided to cut those into separate entries, and use this one just to talk about the film and characters. After all, some people might not yet be familiar with Brave and Scotland’s Disney Princess.

Brave follows Merida, a princess who enjoys all manner of non-princessy things. From the very first scene, we see her as a little girl, learning to shoot a bow and arrow at the encouragement of her King father, Fergus, while her Queen mother, Elinor, looks on disapprovingly.

We flash forward to Merida in her teenage years. She’s still very un-princessy in nature, hating all the lessons with her mother on behavior and decorum. But we also see her excitement in riding her horse, shooting arrows at well-weathered targets, and even climbing the Fire Falls.

The big crux of the film is that Merida has come of an age to marry. Her parents have invited the clans to a gathering to decide which of their sons will marry her. Merida is completely against this, stating openly she’s just not ready. But her mother constantly reminds her: she is a princess and this is her duty.

But at the gathering, Merida shows her strength by claiming her own hand via archery contest at the embarrassment of the clan lords and her mother as well. She flees the castle and comes across a witch who has a solution for Merida.

Obviously first and foremost is the princess Merida herself. As stated above, she’s not your typical princess. She doesn’t want to sit in a castle and weave tapestries like her mother; she wants to be outside, adventuring and shooting with her bow and arrow. Romantic love isn’t what she wants, seeking simply to be her own self for right now. But Merida is also headstrong and has a tendency to not see when she’s done something wrong.

Hey, weren’t we all like that when we were teenagers?

Merida’s very loving and caring parents. Honestly, these two are a cute couple. Fergus is light-hearted and kind, with a big heart. He clearly loves his father, and it shows. He can sometimes be portrayed as the clueless father figure, but he understands and encourages Merida’s independence, being the first to gift her a bow of her very own.

Queen Elinor is more serious than Fergus, looking to ensure her daughter will grow into the woman and queen she’s meant to be. She’s apprehensive about Merida’s interests, but she is still a loving mother, immediately regretting the moments of losing her temper at her daughter. She’s wise, but also revered and respected by all, made evident especially when the clans stop brawling as she walks by.

By her teenage years, Merida also has three younger brothers, Hamish, Hubert, and Harris, who are all very mischievous. They’re constantly seen finding ways to steal cakes and pastries from the kitchen, and also wreaking havoc during the gathering of clans.

Three separate clans arrive for the gathering to present sons for Merida to marry. These clans are: MacGuffin, Macintosh, and Dingwall.

Representing Clan MacGuffin is Lord MacGuffin and his son. A feature for young MacGuffin is that no one can understand him when he speaks. Why is that? Because he’s speaking Doric, a dialect of the Scots Language which can often be challenging to understand.

Another fun fact: both Lord and young MacGuffin were voiced by Scottish actor Kevin McKidd.

Clan Macintosh is the second of the clans that comes to accept the challenge for princess Merida’s hand in marriage. The Macintosh clan wears woad paint upon themselves, which is something often seen in Celtic history.

Though it’s unclear where in Scotland Brave is set and the time period is unclear, it’s possible that woad wasn’t used often during the time, but it’s a unique addition to a) give the clan distinguishable characteristics, and b) use markings that were relevant to Scotland’s unique history.

The final clan is the Dingwall clan. In some ways, the Dingwall clan serves as extra comedic relief. See that stool Lord Dingwall is standing on? He does stand on it to make himself taller when presenting his son. It is also Lord Dingwall who plays a class “feast yer eyes” gag on the other Lords bending over and lifting his kilt.

His son is also played for a lot of laughs as well. He’s more quiet than the other two young lords, but will also snap to attention when his father yells attack.