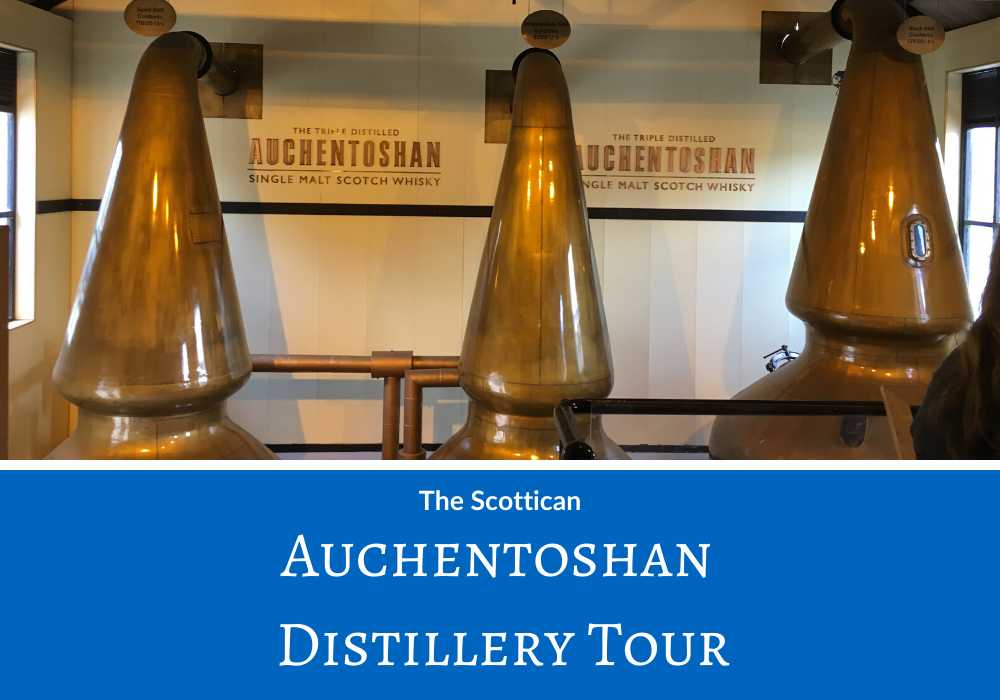 In Spring 2018, my friend and I went along to Auchentoshan Distillery in Glasgow, and joined the tour group. I know nothing about whisky-making, so doing this tour really gave me more insight into that process. And the Auchentoshan Distillery is in a nice area and felt like a very intimate tour; there weren’t a lot of people, so our guide was able to give us plenty of attention.

It’s a long driveway down to the start of the tour, so be aware of that before you start. You do walk both within the distillery and outside between different areas, but nothing too strenuous.

We started with a bit of the history of Auchentoshan Distillery before learning about whisky itself. As you walk on, you’ll get to see the stills and hear more of the whisky basics: the different malts; the aging process; the different types of barrels. You’ll also get to walk through and see the barrels of whisky on display.

Along the way, you’ll sample some different aged whisky during the walking part of the tour. You will not get drunk, but there’s enough to taste the differences.

Concluding the tour, you’ll settle down in a room resembling a wee bar for more samples of whisky: plain whisky and a mixed drink—which is SO good. We also got a wee Auchentoshan mug as a souvenir! But, of course, you’ll also get a chance to look through the gift shop at the end—and perhaps purchase your own bottle to take home!

So the Auchentoshan Distillery Tour is great to do if you a) are a whisky aficionado, b) want a tour that’s close to the Glasgow area, and c) want to see some Highland cows!

Now, unfortunately, I do not have a lot of pictures to share with you guys, which I like to do when I take a tour. But a lot of these distillery tours, you’re not allowed to take pictures in many of the rooms. I grabbed a shot or two in some of the areas we were permitted, but most pictures are of outside where there are actual Highland cows roaming!