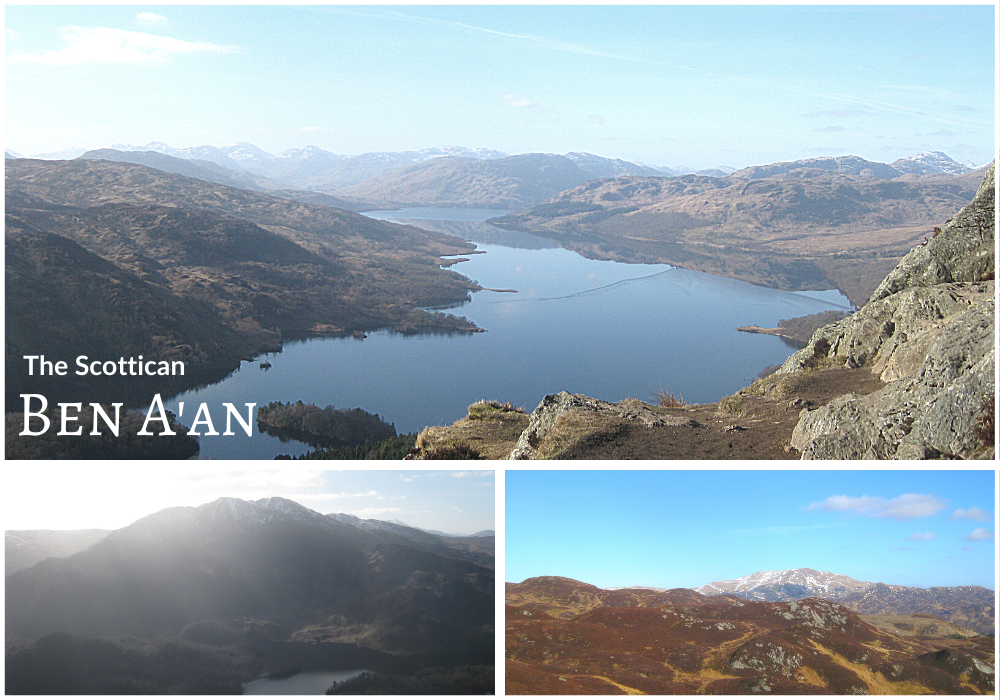 Scotland is full of hills. What this American learned while living there is that their “hills” are more like what I’d think of as mountains. I mentioned this fun fact in my Fun with Gaelic: Beinn.

But if you’re into it, there are some great ones for walking—no matter what your skill level.

I’ll fully admit I’m not the best hill-walker when it comes to Scottish hills. I climbed Arthur’s Seat in Edinburgh in 2018, which I wrote a story about in my To Scotland book. I also climbed the Holy Isle off of Arran in 2017—but that’s… well, I’ll say that’s a story for another day (though sadly I lost my pictures from it).

This was when I first realized that Scottish hills are mountains to me. But as I also said in that same story, The Climb, in my To Scotland book: the view is always worth it. In fact, the image you see on the cover of To Scotland is from this climb; it’s at the top of Ben A’an overlooking Loch Katrine.

Personal Story from this Walk

So, I was the slowpoke on this walk, hanging behind everyone else to take pictures, but also because my legs and lungs were not used to the steep climbs. At times I felt like I was holding everyone up, as they kept stopping for me.

But my Scottish friend, who is a big hill-walker himself, was super encouraging and didn’t make me feel bad for it. He even said I was doing an important job, taking all the photos, as he didn’t usually do that. He said one day, I’d have to show him all the shots I took.

Well, seven years later, and he’s still not seen all these photos, so I thought this entry could serve more as a photo collection. Peter: here’s all these great shots of the Ben A’an climb you never got to see.

Ben A’an is a smaller hill. I would say that if you’re in relatively good shape, and can handle a few steep inclines, Ben A’an might be a hill you can walk. I’m not the most experienced hill-walker, but I did manage this hike. I was the slowest person in the group, but still reached the top.

That being said, it is steep. There are some big inclines, so it’s important you know yourself and your skills. It’s always good to challenge yourself, but do be realistic about your fitness.

According to WalkHighlands, the walk can take 2-4 hours, and you’ll want to budget time for photos and view-admiring. Pack snacks and plenty of water. If you have a good day, you may also want to have lunch atop the hill, as we did. There was a parking area at the base of the hill, which was convenient.

Make sure you have good walking shoes. Along with that: wear comfortable clothing. I say this as someone who hiked the Holy Isle in jeans and sneakers*: the wrong attire will destroy a hill-walking experience.

*In my defense, I did NOT know we were going hill-walking that day.