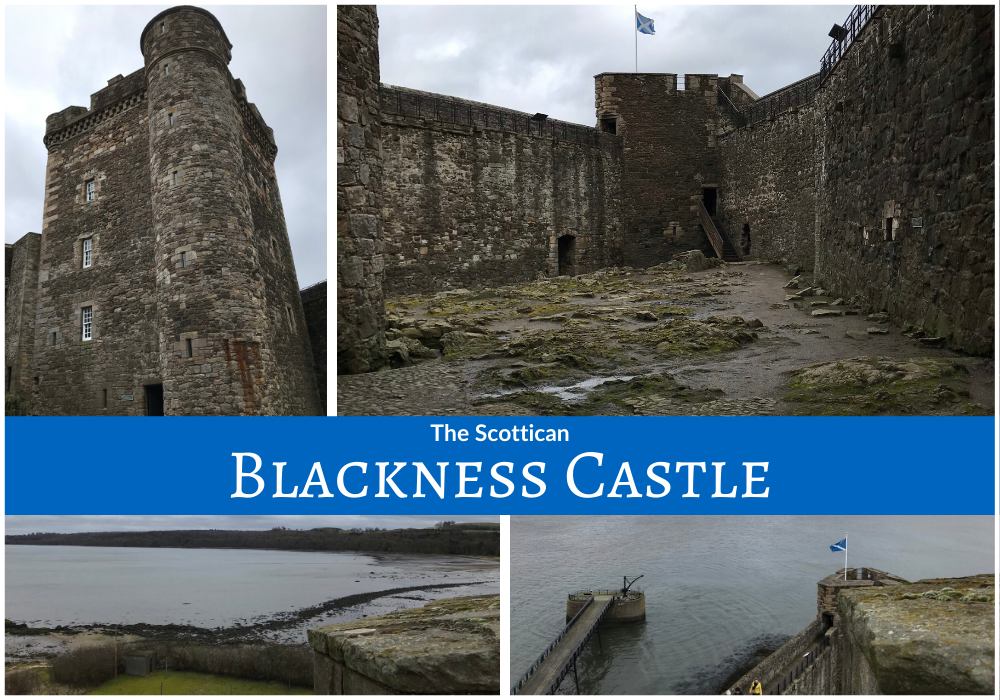 If you’re a fan of Outlander, you’ll probably recognize the castle in these pictures. I got to see Blackness Castle in February 2020 on the Outlander Adventure bus tour offered by Rabbies, which I reviewed in this entry. This was probably my favorite stop on the tour. I’d never been to Blackness Castle, and it was such a cool site.

Blackness Castle was built roughly in the 1440s by the Crichtons, and served as port for Linlithgow. The Crichtons were a powerful family at the time. Sir George Crichton, who built Blackness Castle, held many high positions, including Sheriff of Linlithgow, Lord High Admiral of Scotland, and Earl of Caithness. In addition to the castle serving as his residence, it was also used as a prison during Sir George’s residency.

Between the years of 1537 and 1543, the castle underwent a great deal of reconstruction and fortification. This led to it becoming one of the “strongest artillery fortifications of its age” Much of what we see of Blackness Castle today is a result of the construction done in that era.

However, more reconstruction was done on the castle in 1660, after surrendering to Oliver Cromwell’s Scottish campaign. This was required after the castle was badly damaged in its pursuit. It continued to be used as a prison, and in 1870, it was used as the army’s holding depot for ammunition.

In 1918, the army officially left Blackness Castle for good. Shortly after this, new work began on the castle to return to it to its more medieval appearance. This restoration took 9 years, work starting in 1926 and finishing in 1935.

Now, Blackness Castle is available for tourists to visit and walk through at their leisure—though, of course, due to COVID-19, it’s currently closed. It is considered a historical relic, but is sometimes used for television and film.

Fun fact about Blackness Castle: it is sometimes called ‘the ship that never sailed’. It earned this nickname due to its appearance from the water. The castle sits on the Firth of Forth. Looking at it from the water, the castle has a ship-like appearance.

Much like Doune Castle in the Stirling area, Blackness Castle has had its fair share of appearances on big and small screens alike.

It hosted yet another film released in 2018: Outlaw King. Outlaw King is a Netflix film about Scottish king Robert I—or as known then, Robert Bruce. Yes, Robert THE Bruce. Blackness Castle was used as Yorkshire castle.