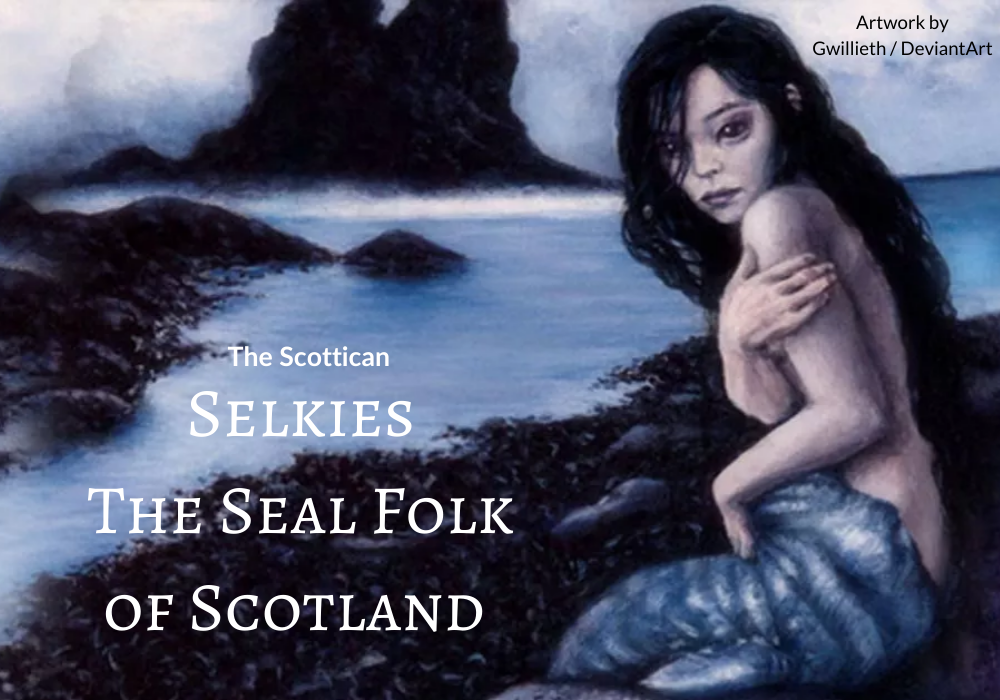 A while back, I wrote about the mythological Kelpies beasties, said to haunt the lochs of Scotland. Today, we’re diving back into the waters and learning about the Selkies of Scottish mythology.

Selkies, also know as the Sealie Folk, are what that second name—and the picture above—implies. They are, in a sense, seals who can shed their skin and become human. Or perhaps they are really humans who can transform into seal. Whichever may be, Selkies are magical beasts, able to traverse the water as seal and the earth as human

Stories of these creatures descended from the Northern Isles of Scotland, specifically Orkney and Shetland. Unlike Kelpies, Selkies do not seem to be interested in causing harm to people, although there are some stories from Shetland that say they may lead people out to sea, who are never seen again. But for the most part, they are known to be gentle creatures.

Selkie tales are often more about those who steal the Selkie’s skin. If one were to steal the skin of a Selkie, it could not return to the seas. Thus, the Selkie must remain human.

Many of those tales feature a man who spies a beautiful, naked woman on the shores, finds her seal-skin, and forces her into marrying him. Proving the peaceful nature of the Selkies, she often agrees, for she cannot return to the waters without her seal-skin.

Most stories say that while married, the Selkie remains as a good wife and mother to her children. However, once her skin is retrieved, she will immediately run back to the seas.

Whether or not she comes back to visit her children is debatable. Some stories say that the Selkie will visit her children on occasion, while others say she’s never seen again. Still others tell of a seal that waves at the children as they sit on the shore.

The tales of the male Selkies paint a different picture of these creatures. While female Selkies have their skins stolen, thus forcing them into the hands of their captors, male Selkies attract humans to their sides. The lore about male Selkies say that they are irresistible as men. They often entice lonely or out-of-love women, who pine for them after their disappearance.

Some stories say that women try to summon the Selkies back to them by crying into the sea. However, this summoning can only happen at certain times, as the timeline of when a Selkie can take human shape isn’t clear.