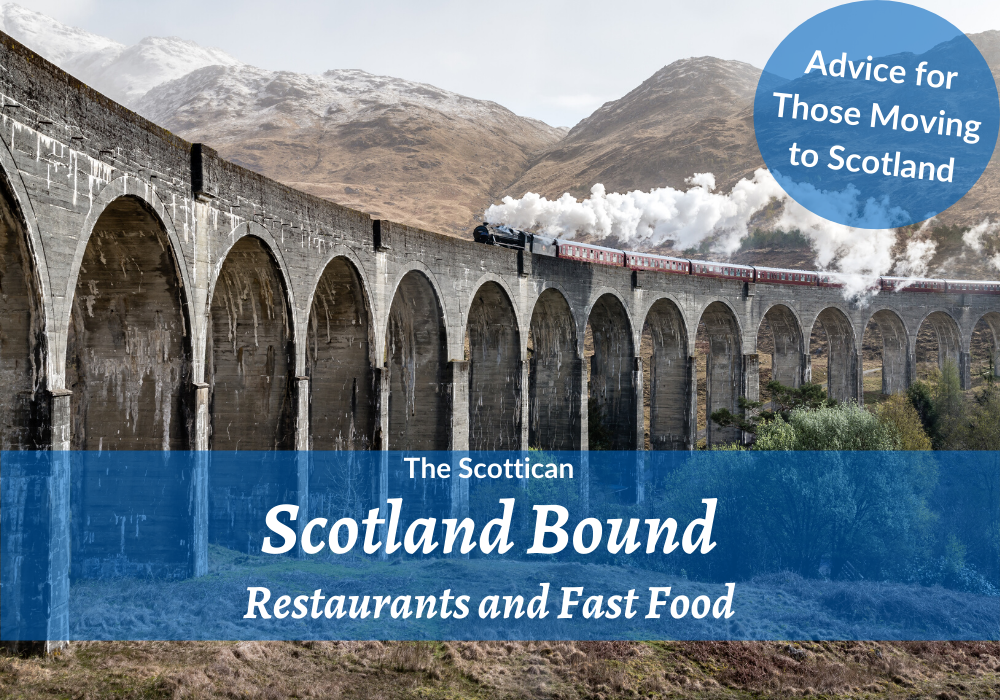 Earlier this week, I covered food differences you might notice when grocery shopping. To tie into that theme, today I’m introducing you to restaurants, popular food styles, and common fast food places. If you’re moving to Scotland, it’s good to have an idea of what food you’ll be in store for—both when buying in a store and when eating out.

Not unlike America, Scotland’s got plenty of restaurants so you can have a night off from cooking. However, some of the food types might be different than what you’re used to.

I have a friend who loves Mexican food, but found few options for Mexican when living in Scotland. When she finally found a place, she said it wasn’t as good as what she got in America. I think there might have been differences in spices, and thus flavors. Remember that Mexico is a bit closer to America than it is to Scotland, so if you like Mexican food, you might notice a few differences.

Indian food is very popular in Scotland, so if you’re a fan, you’re in luck! There are plenty of options for Indian restaurants, including takeaway places. Try the Chicken Tikka Masala, said to have been first created in Glasgow!

I myself am a big fan of Asian food. I’ve gotten some good Thai food in Scotland. But I’m also a fan of sushi, which I usually always get once when I’m there on vacation. The sushi in Scotland is different than America. However, names of rolls might be different or they might not have specific rolls that we have in America. So if you’re very devout to your specific sushi rolls, you may have to adjust.

But you can also find plenty of restaurants that give you a taste of familiarity as well, such as Hard Rock Cafe or TGIFridays. Plus, pubs—and, thus, pub food—are in no shortage.

Some days, you’re just gonna want to grab a coffee. And luckily you’ll have a fair share of cafes to grab some at!

I’ve yet to see a Dunkin Donuts in Scotland, but Starbucks are plentiful. Keep in mind though that drinks may vary—as in, your favorite drink might not be available! This is more in terms of flavor add-ons. My personal fav is the Toffee Nut Latte; I love the not-too-sweet, slightly buttery taste of the toffee nut flavor, and if mixed with vanilla soy milk? Mmm, I’m happy to be basic for that. But you can only get Toffee Nut Lattes in Scotland during the holiday season, and even then, their TNLs have a hint of peppermint, which I’m not a fan of.

So if you’ve got a similar taste preference to mine, you might need to adjust your latte flavor desires.

That being said, there are plenty of other cafes to check out in Scotland, too. I personally like Cafe Nero, but I know plenty of others who prefer Costa. A recent addition to Glasgow is Tim Hortons, which many Canadians might be more familiar with.

Of course, these are chain cafes. There are so many other options if you’re looking for a small cafe, but that’s not something I can cover in this entry. In fact, I’d need to do several if you wanted me to cover different cafes in various Scottish cities—because, really, there are tons of small, independent cafes. I’d recommend checking them out just as much as a chain; while the chain can bring you comfort in what you know, you might find a new place to be loyal to.

It’s easy to find fast food in Scotland. Not just the chains you’re used to, but plenty of chippies as well.

If you’re needing a McDonald’s or Burger King fix after a fun night out, you’ll be in luck. KFCs and Domino’s pizza are also common. I’ve been seeing Taco Bells popping up, as well as Krispy Kremes. So if you’re an American, and you’re looking for some familiar fast food comforts, you’ll definitely be able to find it.

Again, keep in mind there may be differences in tastes, depending upon what you’re used to. Domino’s in Scotland has a garlic dipping sauce that comes with all their pizzas, and it is SO good, you guys. Probably not good for you, but great in taste. I’ve not tried KFC, as I don’t eat KFC, so I can’t comment on differences there. The Taco Bells are fairly new, so I haven’t tried that, but McDonald’s and Burger King are the same.

Another common fast food grab is the chippy. Basically, your wee shop that’ll sell all manner of fried food. Common favorites include the fish supper (fish and chips*); sausage supper (deep fried sausage and chips*); pizza crunch (deep fried pizza); pakora (another form of deep frying, but I believe it’s Indian); and fritters (like a deep fried potato hash brown). But there are usually tons more options, too.

Of course, I can’t mention Scottish fried foods without mentioning the elusive deep fried Mars Bar. Another one I haven’t tried, mostly because I like eating throughout the day and the deep fried Mars Bar covers all your calories and more in one serving.

The common theme seems to be: you may have to adjust your tastes. Foods and drinks will have their differences from what you’re used to. And in some cases, you may not be able to find an exact match for what you’re looking for—such as your Starbucks order.

But “adjusting your tastes” might just mean try something new.

If you’ve never had Indian food and you’re now living in Scotland, why not try some?

Love Chinese food? Perhaps this is a good opportunity to try Chinese food available in Scotland.

Can’t get your specific flavor for your latte (yes, I’m making fun of myself), then it might be time to get something else.

Basically, just be open-minded. You’re in a new country. Part of the fun is trying something a wee bit different.