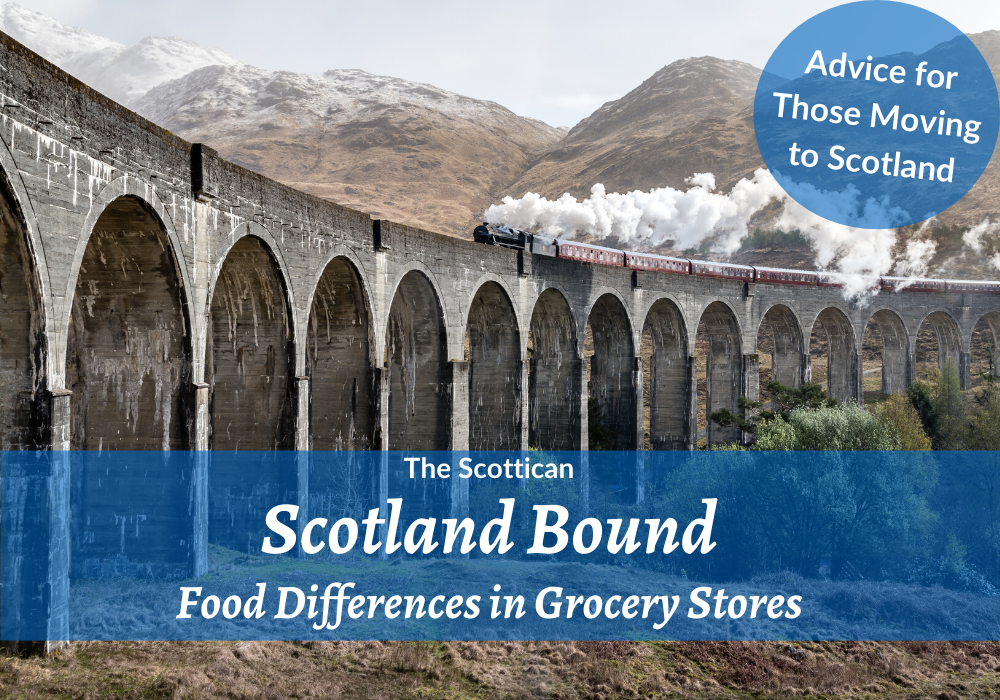 I have a whole separate entry on Grocery Shopping in my Scotland Bound series to help new residents get an idea of where to shop. But this entry is going to focus on food and how it’s different from what we get in America. You can get a lot of similar foods in Scotland, but it’s important to remember things might be different. You might not be able to find certain foods; some might be of a different quality or have different ingredients; or you might just find you don’t like the taste.

That’s why I wanted to shine a bit of a light onto it. I’m using examples I’ve seen in my own life from complaints visitors and fellow students had.

The biggest difference you’ll find in grocery stores in Scotland is simply in brands and types of food. You’ll be able to get staples of things to eat: meat, dairy, baked goods, etc. But they might not carry all the American brands you’re used to.

You might be able to find American foods, but usually it’s novelty foods, like candies and high sugar cereal.

This will mean you’ll have to sample different foods and brands to get a feel for what you like.

I’ll use cereal as an example. There are plenty of cereal brands that are common in America that won’t be available in Scotland. If your choice cereal isn’t available, this is an opportunity to sample new cereals and find a new favorite. Or you might find that there’s an equivalent to your favorites; if you like Cinnamon Toast Crunch, there’s a Curiously Cinnamon cereal that’s basically the same thing.

Struggling with Tastes and Preferences

Another example of this that might be more relevant is peanut butter. Peanut butter is a big thing in the States; we can be a bit picky a bout it. A few Americans I attended university with hated the peanut butter in Scotland. They’d have American family members send peanut butter via mail. To be fair, my request was for grape jelly, which was also impossible to find in Scotland.

You know this is entirely an American thing because I’m talking about peanut butter and jelly in the same sentence. I once had a work placement where I brought a PB&J sandwich for lunch, and everyone commented on how American it was.

Anyway, the point here is you might not like some of the brands you can get out here—like how American classmates didn’t like the peanut butter you can get in Scotland. That will leave you with two choices:

For example: soda. I usually only drink soda in Scotland as most of their sodas are made with real sugar. I prefer the real ingredients to partially hydrogenated corn syrup, and I think it tastes better. However, there’s been a big push to use artificial sweeteners recently to minimize sugar intake recently, so sodas and foods with those in them aren’t as uncommon.

Now, neither of these are a dietary need. Scotland does have “Free From” options for those with food allergies or sensitivities. Often, there are sections of aisles in shops dedicated to this, but again, you may have to shop around for your own personal needs. If this is something people would like to know more about, let me know and I’ll see what I can do.

If you have food sensitivities and allergies, make sure you’re checking out those ingredients, especially as you get used to food shopping.

No Equivalents and New Food

Now, you might also have a shopping trip where you’re unable to find any equivalent or similar products, even with different ingredients.

I knew an American who was really bothered by being unable to find pickles regularly in shops. Or if she was able to find them, they might have been expensive.

Sometimes, you’ll find that foods we love an adore in America, are not as popular abroad. In instances like these, you’ll need to decide how much you want that thing. Is it enough to pay extra for it should you find it in a store? Or pay more to see if you can order online?

Or perhaps do you love it enough to make it yourself? In the example of pickles, do you like pickles enough to make your own when you can’t find them in store?

To be fair, this pickles incident was 7 years ago, and I myself don’t care for pickles (I’ve been called un-American for such), so I don’t know if it’s still impossible to find pickles in store.

But it’s just something to consider.

One last thing to note: occasionally in city centres, you’ll find shops exclusively for American foods. Most of these shops seem to focus on sweets—so different candy and soda and things like that. If you’ve got a sweet tooth, that might be a stop to locate your treat of choice. Do keep in mind that prices there might be more expensive than you’re used to.