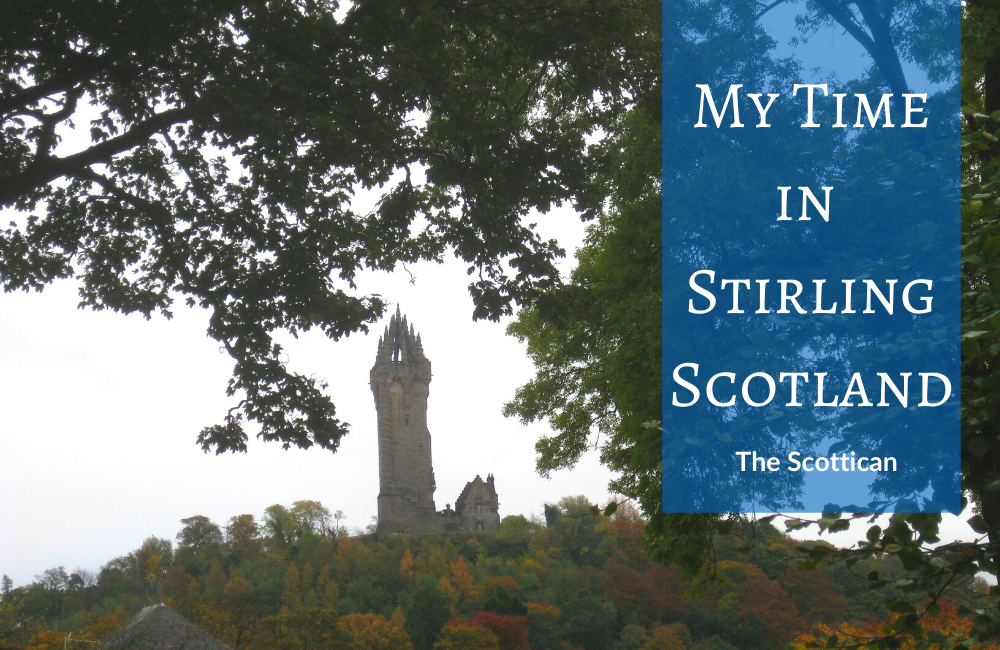 I’m feeling homesick in many ways just now. It’s no secret that I love Glasgow and consider it home, but recently, I’ve been thinking more about Stirling. I attended the University of Stirling in 2012, and I loved that area. So I thought I’d make use of my memories, and write a bit about the University of Stirling. A new school year is approaching, and hopefully students will be able to attend in-person in autumn. So, why not introduce people to my old stomping grounds?

Stirling and Bridge of Allan

Stirling is a wonderful area of Scotland that you might not be familiar with. I won’t take time to tell you about different things to do if touring there—because I’ve already done that in this entry on Stirling.

But it is beautiful and scenic, for those who like the views. I lived in Bridge of Allan, not far from Stirling city, and it was a nice wee town that had all your essentials close. But I could also find different areas to walk that distanced me from town-life.

There was also plenty to do in Stirling, depending upon your fancy. There’s history in terms of the castle, the Wallace Monument, and other areas. But there’s also the city life stuff that you’d expect like pubs, tattoo and piercing studios, shopping, and clubs.

It also felt very safe. I never really had any fears walking around the area. Once, when I was returning from a placement in London, I arrived back in Bridge of Allan very late. While I did chat on the phone with friends as I walked to my flat, my biggest concern was how cold I was.

Obviously, I will never tell people to lose their inhibitions when living somewhere; you should always be aware of your surroundings no matter how safe you feel. But there’s still something nice about feeling safe in the place where you’re living.

One of the nice things about the university campus is it feels very intimate. I mean, in comparison with other university campus’, I’m sure it’s quite big. But as I reflect back on it, I never felt overwhelmed or lost.

This is a little different in comparison to my experience on the University of Glasgow campus, where I have felt lost in the times that I’ve explored it while on vacation. But that could be due to a number of different reasons.

Either way, Stirling campus has a nice feel to it. There’s a loch on university grounds, which provides beautiful scenery (just don’t feed the swans). There’s a castle and even some standing stones, though unfortunately I didn’t know about the stones until just recently; I’ll have to get back to see them soon! There’s also some wooded area on campus, which I used to like sitting in.

In terms of finding your way to the different halls and buildings, even that isn’t too overwhelming. I know for myself, all of my classes were in one building, so I didn’t have to worry about others. But the main building, the gym, the Macrobert Art Centre, even the printer where my dissertation was printed and bound were all easy to find.

I’ve written a whole entry on the Wallace Monument, as viewed from inside, but the monument was an important figure in my everyday life while attending university. The Wallace Monument was something I saw every day walking to and from campus. It became a sort of comfort to see this monument as part of the skyline. It’s such an awesome sight to see, which would make it all the more eerie when the fog was so heavy that it covered the monument entirely.

So the monument is worth a little call-out, simply because if you live in the Stirling area, it’s going to be a big part of your scenery.

Getting To and From

If you’re getting ready to move to Stirling, you’ll be happy to know that it’s a wonderful, beautiful place to live, but it’s also pretty easy to get around. The area itself is easily commutable whether by public transport, or even cycling or walking. On occasion, I’ve walked from Stirling city centre to Bridge of Allan, and though it was an hour walk, it wasn’t strenuous and I felt safe.

If you’re wanting to get into Edinburgh or Glasgow, the train can be gotten from either the Bridge of Allan stop or the Stirling stop. The ride itself isn’t too long either, both short of an hour. To Edinburgh, it’s about 50 minutes, I believe, with Glasgow being 45ish minutes. This depends on the train you catch, as some could be slower or make more stops. Further train routes could require switching trains, so it’s always important to check the schedule and plan ahead.

Stirling is also a great spot to start your journey into the Highlands. I consider it the gateway city, as it’s easy commuting to the bigger cities of Edinburgh and Glasgow, but provides easier access to the Highlands.

If you’d like some tips on different spots to check out while in Stirling, do check out this entry for some travel ideas (but keep it to just plans right now, as we’re still in the midst of lockdown).