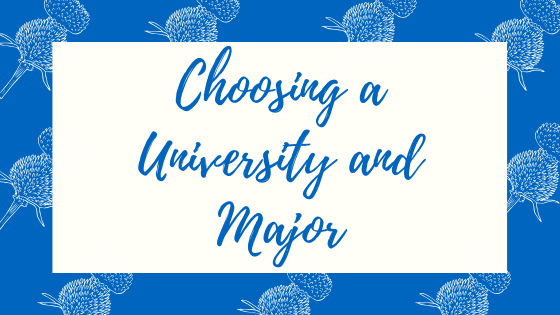 I decided to break up my Scotland Bound: Studying Abroad entry up into smaller, easier-to-digest pieces for those who found the original entry too daunting. I’ve broken it up into three different entries; this is the first, Applying to Your University is second, and Visas is third. This post is on:

Okay, this one’s a little obvious, but it’s an important first step. I would encourage those planning to move abroad to earn a degree to really think about themselves; their needs and personalities; and ultimately what they envision their future to be while considering universities and degree.

For example, a year or so before I moved to Scotland, when I still only daydreamed about a goal that I never truly knew if I’d accomplish, I’d been intrigued by the University of Strathclyde.

However, when I started looking at universities to apply to, I took the application process seriously. As I said in my To Scotland book, I didn’t really think I’d go; I was just applying to see if I could get in. But I tried to think and plan based on who I was at the time.

I knew that I wasn’t good in big cities. To this day, I am still not a big lover of New York City, despite how much everyone seems to love the Big Apple. Knowing that, I thought it might not be in my best interest to choose a school in the heart of Scotland’s bigger cities. At the time, I didn’t realize that big Scottish cities were not like big American cities. But it still felt like the right thing to consider. So I looked for a location that wouldn’t overwhelm me, but would allow me to visit those cities occasionally.

Which led to my heart settling on the University of Stirling. It was a fairly equal distance from Stirling to Glasgow or Edinburgh, but it was in an area that didn’t seem like it would be as daunting to try and navigate.

It’s really important you weigh all your options, and the pros and cons, on each aspect of your education. The university; its location; the degree you want and what you want to do with it; and combine all of these considerations with what you know about yourself and your personality. This will help you make the best decision for yourself.

So check out different universities. Look at each of their websites and all their different majors. See if you can find some images of their campuses. How easy is it to get around? Are there videos or vlogs of current students that can give you a better feel? Reach out to schools and see if they can put you in touch with someone who shares the major you’re considering.

You’re picking a school that you’ll be paying to provide you an education that you hope will lead you to your future career. That’s worth digging into. All of these elements will help you make the best decision for your future education, whether you’ll be studying abroad for a couple of months, or a year, or several.