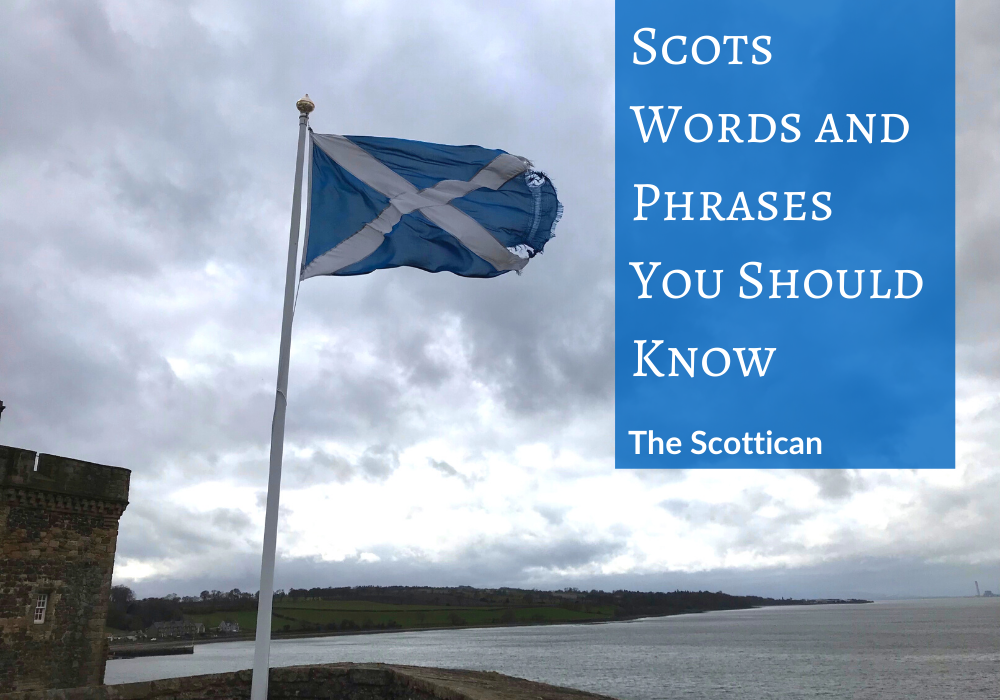 Visiting a new country can sometimes be daunting, especially if the language used is not your first. Scots all speak English, but sometimes that English can be difficult to understand due to both an accent and because it’s intermingled with the Scots language.

Scots is both a dialect and a language all on its own, so don’t fret if you struggle with understanding some speech occasionally; it does take a while to pick it up. To jumpstart you, here are ten words/phrases along with their meanings that you will hear while visiting or living in Scotland.

We’ll start you off easy with the word “Aye”. Most of us know the word Aye without visiting Scotland, but it’s actually used quite a bit there. When talking with Scottish friends, you’ll hear “aye” as opposed to “yes”, and if you’re Scotland Bound, then expect to hear it quite often as well. It’s not technically a Scots word, but it’s so common, it felt right to include.

I wrote about the word “Gie” in “Scots Words in ‘Well O’ the Worlds End” (yes, I used the same image there too; it’s a nice picture). “Gie” means “give”, so something like “gie it a shot” would mean give it a shot. “Gie” can be spelled a few ways, like “gee”, and can have other iterations just like the word “give”—so, “gies a winch” or “gees/geez a winch” would be a request for a kiss.

Dinnae dae that, dinnae fash, ah dinnae know. “Dinnae” is a great word with such a Scottish sound to it, and it quite simply means “don’t” or “do not”. So, all of my opening examples means: don’t do that, don’t worry, and I don’t know.

Gonnae No Dae That

You might know this one because you’ve heard it, or perhaps you’ve seen my profile picture where my T-shirt says it. “Gonnae No Dae That” is another great Scots saying that I more often than not hear in television shows, such as Still Game. You can use “Gonnae No Dae That” to say “stop doing that!”

“Taps Aff” is a phrase you might hear a lot more during summer. You know, those two great days of summer in Scotland. If you’re American, you might think this has something to do with the taps that your water comes out of. But in this case, imagine those “a”s were “o”s, and you might have a better idea of what it means

“Boak” is a word I love. It means to get sick, as in vomit. You can use it in a few ways, like “that’s geein me the boak” (that’s making me sick) or “that’s boakin”. I just like the way it sounds and I love hearing people use it. It’s a great word.

Scotland’s got quite a few words for drunk—and “mad wae it” is one of them. I see people use this one on Scottish Twitter quite a bit. Usually when I hear it used, it’s a happy and fun drunk, if a bit crazy. I could be wrong on that, but it’s the way I’ve seen and heard people use it the most.

Steamin is yet another word for being drunk! There are a few of them, and “Mad Wae It” and “Steamin” are the ones I’ve heard the most. Another way you might hear “steamin” used is by someone saying they’re “steam boats”.

You might think you know the word “how?” But in Scotland, you might not hear it used the way you’re used to! You might hear someone say “how” when you’d expect them to use the word “why”—and that’s totally a thing! If this happens, just treat it like a “why” and gie them an answer.

This word comes out a lot when winter start setting in. “Baltic” is used a lot when it’s cold out, so when the temperature drops, be prepared to hear “it’s Baltic”. When you hear it, trust that it’s time to bundle up. If the Scots are cold, than it must be really cold!