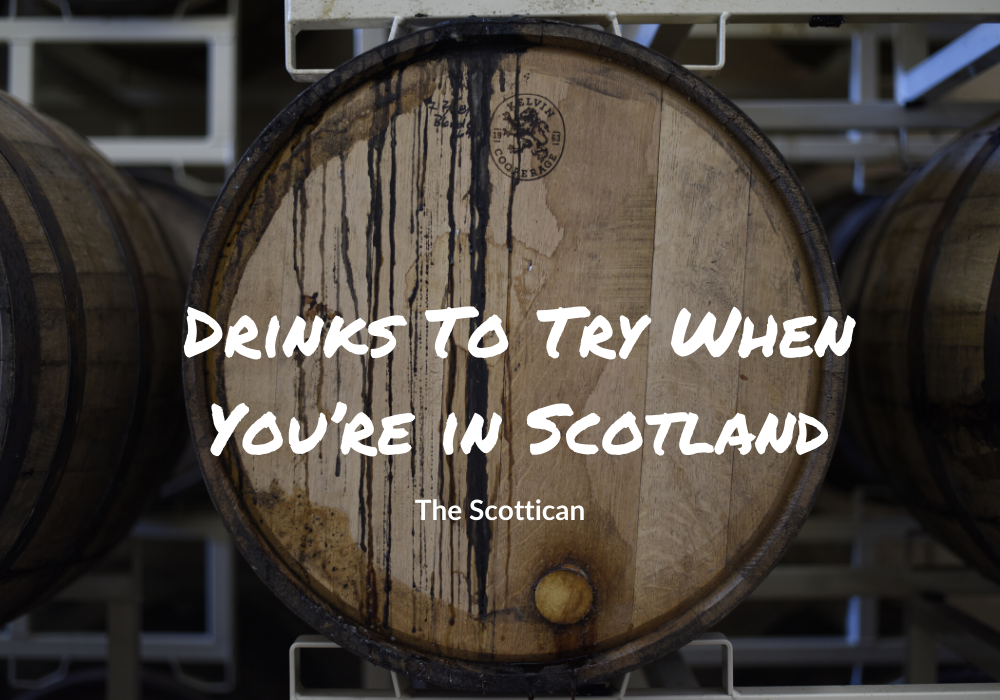 Again, same rules apply: I’m only going to suggest things that I personally have tried—and weirdly, I feel like I haven’t tried very much! But we’ve got a few good, very Scottishy things on this list that are worth trying.

I will be including alcoholic drinks on here as well. I mean, we’re talking about Scotland; it would be wrong not to suggest one or two Scottish alcohols! But if you’re not a big drinker, no worries. There’s still plenty you should try out.

People have been talking a bit more about Irn Bru recently, and I think that’s partly because of it being mentioned the Gaelic lessons on the DuoLingo app.

Irn Bru is probably the most bought soft drink in Scotland, as hinted at by the below graphic, shared by @onlmaps.

Now, the validity of the above graphic has been called into question, but the point I’m trying to make regarding this graphic isn’t to show how popular Coca-Cola is, but to show Scotland is the one exception that sea of red—because Scotland’s popular drink is Irn Bru, as they were happy to brag about it.

Wanting to know what Irn Bru tastes like? Well, I’ve only had it once and that was about 7 years ago, but I remember it tasting sort of like bubble gum. It was strange, but by the time I was done with the bottle, I was a little sad.

Some say that Irn Bru is a sure cure for a hangover, so if you’re in Scotland and you had a wee too much whisky the night before, maybe give an Irn Bru a shot.

Something to note: Scotland’s being working to remove excess sugar from their products, and Irn Bru was one of those soft drinks that had A LOT of sugar. So within recent years, the recipe has changed, though they swear it tastes the same. I personally don’t drink soft drinks that have artificial sugars in them, which a lot of sodas have changed their recipe to include in order to meet with new requirements, so the Irn Bru recipe is now a bit different and does include artificial sugars. This might not matter to others, but I thought I’d note it.

I think people will argue with me on this one, and I’ll agree that maybe this one won’t be for everyone. But I think Buckfast is uniquely Scottish (and apparently a bit Northern Irish as well), even if it has a reputation.

So what is Buckfast? Well, it’s a (highly) caffeinated, tonic wine.

In digging into a bit of the history of it, it turns out it was originally made by Benedictine monks residing at Buckfast Abbey

One thing to note about Buckfast is its reputation, as hinted at earlier.

It would be a bit unfair of me to comment on the taste of Buckfast at this time, as I do think I’ve tried it before, but it was a few years ago. I don’t remember it having a rough or bitter taste; I can often have a noticeable reaction upon trying different wines, and I don’t remember having one to Buckfast. If anything, I remember it being quite smooth to drink. But, again, it’s been a few years, so perhaps I’m due a refresh when I return to Scotland.

I’m recommending this one simply because Edinburgh Gin is the first gin I tried with different flavors. The first one I tried was Rhubarb and Ginger; when combined with tonic, it tasted like a grapefruit. It was awesome! I’ve been iffy on Gin and Tonics, as I’m not a big fan of how bitter they can be, but with some of the fun flavors that Edinburgh Gin offers, it gives those Gin and Tonics a nice kick. It still has a bitterness to it, but it isn’t as potent of a punch when combined with something sweet.

And the big bottles are actually really pretty—always a bonus if you like saving them for crafty purposes!

The flavors I’ve tried are the Rhubarb and Ginger, Raspberry, and Elderflower—and I’d recommend them all! You can get a sample pack with these 3 flavors at Glasgow Airport, so be on the look-out next time you travel!

Yes, plain and simply, you need to have a proper cup of tea.

And hear me out: I’m not a purist. There will be people who will say a good, proper cup of tea doesn’t have milk, or sugar, or whatever. I know the way I take my tea changes depending upon my mood.

But the water in Scotland is AMAZING. I’m not over stressing this: I adore Scottish water. I feel more refreshed after a shower; my hair looks awesome; I drink straight out of the tap and always tastes great. I love Scottish water and I hope it never changes.

I often find that I can’t drink black tea in the States because of how much I’ve come to enjoy tea in Scotland. I attribute this to the water. My water here in the States is fine. We filter it before drinking, and we’re tea-drinkers, so it’s not like we don’t have tea in the house. But even if I get exact measurements of milk and sugar, and steep for the same amount of time, the tea never tastes as good.

That is why I feel like one must enjoy a cup of tea whilst in Scotland. And if not for that reason, then because it’s the proper thing to do!

I mean, if you’re in Scotland, you might as well, right? And luckily you’re in the best place to be trying Scotch; you will not be limited on choices! No matter what your preference in flavors or even locations, you can find a Scotch that worth a shot.

But, of course, right now most of us are still in quarantine. So, if you’re not currently in Scotland, here are some Scottish whiskies you might be able to find in your local liquor store in the States.

Obviously, there are tons of different whiskies available, and each will offer different flavors based on ingredients and distillery location, but unfortunately not all Scottish whiskies are imported to the US. All the above are ones I know I’ve definitely seen in stores near me!