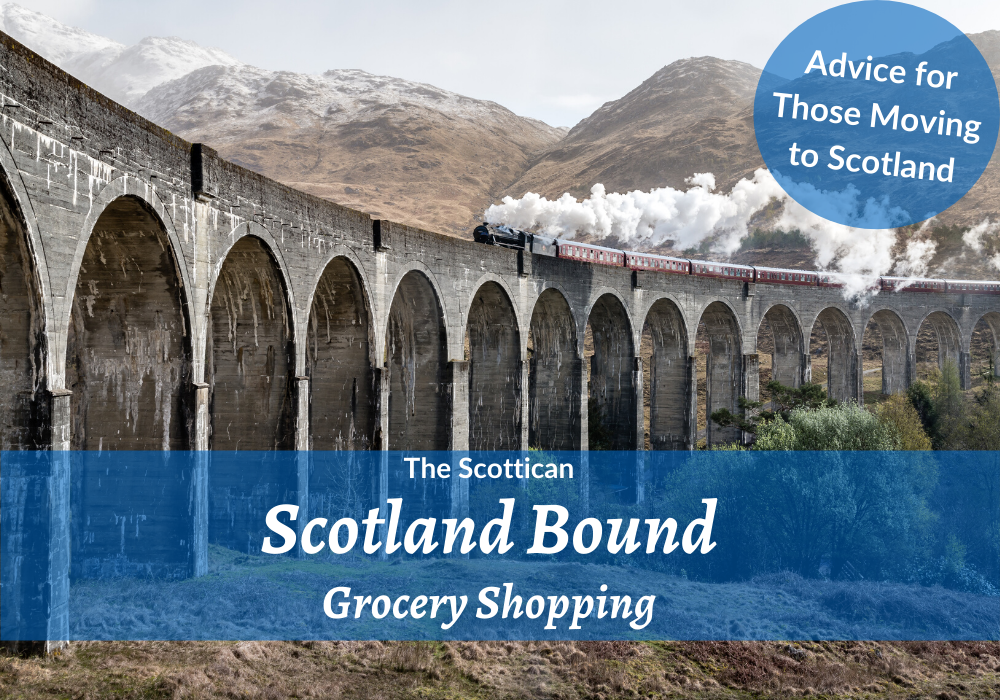 Today’s topic on Scotland Bound is something that will come in handy both for tourists and new residents alike:

It’s not difficult to do grocery shopping when abroad, but I thought it would be helpful to provide a list of grocery stores you might see while you’re out and about—simply because it’s good to have those things in mind before you go traveling.

Tesco is probably the spot I do the most grocery shopping, simply because where I usually stay in Glasgow, that’s the closest and biggest shop, so it’s easy to get all the shopping I need done quickly. The shop I frequent is Tesco Extra, which is the biggest version of Tesco. Similar to a Walmart, a Tesco Extra will often have “extra” in addition to the grocery areas. So, they might have sections for DVDs, technology, and other household desires, but also other stores like a Sports Direct.

There are a variety of Tesco stores, from the Tesco Extra to the Superstore to Express and to the Metro. The Extras are the biggest, followed by the Superstores, the Expresses, and the Metros.

The Expresses and Metros can be found in city centers, where you might be looking to just grab essentials. They often have the staples and plenty of other things to form a meals. As their names dictate, they’re smaller shops which may not carry everything the massive shops have.

The Cooperative—or Co-Op, for short—was our primary shopping destination when I was attending the University of Stirling. In the Stirling city area, there was a big Tesco, which we might occasionally get to if we felt like taking a bus or if someone could give us a ride.

I lived in a little area called Bridge of Allan. It was about an hour walk from Stirling city centre, and maybe a 20 minute walk to the university campus. In Bridge of Allan, the closest shop we had for food shopping was the Co-op. It was a smaller shop, but it had all the essentials we would need.

Bonus: every morning when we work up to head to class, you could smell the bread baking. That’s one of the little things I miss about Bridge of Allan: walking to class, seeing the Wallace Monument, while the smell of baking bread hit you on those chilly mornings.

Marks & Spencer’s is known for being the expensive shopping experience in the UK. In Still Game, when characters Jack and Victor have a wee bit of extra money to spare, one of them suggests going to M & S while the other one says that they can treat themselves a little bit, but they didn’t hit the lottery.

But I have had some experience doing some shopping at Marks & Spencer’s. I didn’t do a lot of shopping there while living in Scotland, but in the recent years I’ve made a stop there if it’s been the closest shop. The M & S Milk Chocolate Teacakes are a weakness of mine.

Sainbury’s is another popular grocery store available in the UK. The most experience I have with it is the smaller shops, such as a Sainsbury’s Local. Sainsbury’s Local has been very handy for helping me pick up a couple of necessities when I’m out and about, or if I need some snacks before heading out for a bus tour or walk.

Sainsbury’s is similar to Tesco in that there are both larger supermarkets, in addition to the smaller local shops. So depending upon where you end up living, Sainsbury’s might be your best choice for food shopping.

Lidl is a shop I’ve been seeing popping up in the States recently, and while I haven’t been able to get into one here in the US, I have been there a few times in Scotland. It’s is a great, small shop for all your essentials, and you’ll find that it’s got great prices. Lidl is considered a discount supermarket, so you can be sure you will get good prices shopping there.

It’s also been a good place to shop when I’m in Scotland for Halloween to get some fun, cute, and affordable Halloween decorations. Not a necessity, but still a fun fact.

Iceland is also a shop I’ve only recently started purchasing from. It’s quite handy if you’re someone who enjoys stocking up on frozen food. Iceland has been great for grabbing snacks for movie nights with friends. They have a great variety of options and in a good quantity, too.

But Iceland has also been good when I’ve been out and lost track of time, and I need to figure out a quick and easy meal for the night, but don’t feel like getting myself a chippy.

And their prices aren’t too bad either. I think you could definitely make use of Iceland as a student (though your bigger struggle as a student will be fighting with flatmates over freezer space).

I’ll also mention the store Farmfoods here as well, because it’s also a well-known frozen food store in the UK. I haven’t been there too much myself, but it’s another good place to get frozen food and meals if you’re in need of them.

The following grocery stores are shops I’ve had even less experience with than the ones listed above. But I know they’re all decent places to grab groceries when you’re living abroad

Asda is essentially the UK Walmart. In fact, it’s actually owned by Walmart, something I only realized after noticing how the similarities of the fonts on store signs the first time I went into an Asda (yes, it was typography that made me make that connection above all else).

As such, Asda is pretty much your standard big supermarket. They’re common stores you’ll find in Scotland, so if you’re local shop is Asda, no worries: you will be able to get groceries for yourself.

Waitrose is a chain that I’ve heard of, but I don’t think I’ve actually been in there once. But because they are a relatively well-known shop, it’s seems worthwhile to add them to this list. If I’m not mistaken, I think it has a similar reputation to Marks & Spencer’s in terms of pricing and people thinking it’s more high-end quality. I can’t really comment too much on this, as I don’t have as much experience here.

Morrisons is also another decently sized grocery store chain found in Scotland. I’ve been there once or twice in the times I’ve been back-and-forth to Scotland. But again I’ve not got a lot of experience there. They seem reputable and from what I can remember, the prices seemed pretty decent.

Aldi was one I almost missed putting on the list, simply because I don’t go there often when I’m in Scotland. I haven’t been to one in the US either, but it is fairly common, so it’s worth mentioning here. Aldi, similar to Lidl, is also known as a discount supermarket, so the products you’ll find in Aldi are likely very affordable.

You will likely find liquor in your local grocery store.

This one was interesting to me because I’m used to having to go to a completely separate store in order to buy alcohol in the US. Being able to buy drinks while also figuring out what to have for dinner was awesome.

For Those on a Budget

Your best bets in terms of getting the best bang for your buck is probably shopping at Lidl and Aldi. In terms of big shopping trips, Tesco, Asda, and Sainsbury’s will probably do you well. But a lot of this also depends upon where you’re living and what’s nearby.

Many shops will have food items go on discount later in the evening, say after 6. So, if you’re needing to live on a stricter budget, that’s something to consider to help save a couple of pennies.

There are plenty of places for grocery shopping in the UK, so you should have plenty of options available within your general area wherever that may be. This is a list of the grocery stores I’ve seen specifically in Scotland, especially within the city areas like Glasgow, Edinburgh, and Stirling. There could be different options available in the Highlands, but I would imagine that you’d see shops similar to the ones above.

If you have any further questions about daily life in Scotland—whether about something like grocery shopping or a different topic entirely—let me know and perhaps it will become a Scotland Bound series!