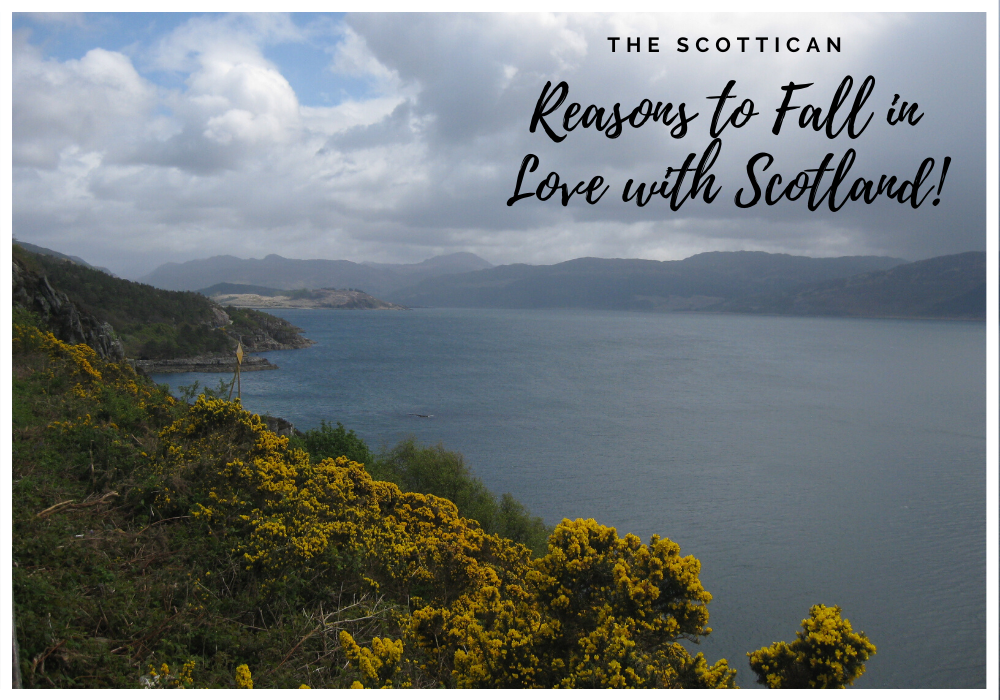 Whether you’re going for a wee visit or you’re planning to move there, Scotland is a wonderful place to go! I mean, clearly I believe so; I wouldn’t have a whole website dedicated to it if I didn’t.

And to kick off a new section of the website called “Scotland Bound“, where I provide different bits of insights and information for those moving to Scotland, where best to start than a few reasons why you’ll love Scotland?

Let’s get this out of the way first: yes, it does rain quite a bit in Scotland; it’s not a lie. But often the rain comes and then it goes. Plenty of times, if you wait a few minutes, you might find that rain storm was just a short shower, and you’re back to having a bit of a cloudy day.

Further, the rain and mist is part of the magic of Scotland. When going on bus tours, the clouds and rain can contribute to amazing pictures, when the fog hangs low. That’s the mysterious, ancient magic of Scotland right there. The rain should be considered a piece of the puzzle that makes Scotland so beautiful.

But there have also been so many days in Scotland where the sun’s been out. Sure, some of those days have been freezing, and the sun did little to help. But my point is the sun will come out; I’ve got several pictures with sun glares to prove it!

Even Scotland’s summers are not as oppressive as summers in the States. And I’m comparing that to summers in, say, New York/New Jersey, as opposed to Georgia or Florida. In 2013, I think the hottest day we experienced in the summertime was in the 70s (Fahrenheit; 70F is 21C and 80F is 27C).

That weather might not be ideal for those who are beach lovers, but there is still plenty to love about Scotland. And she does have her beaches too!

No matter what you’re interested in, you can find something in Scotland for you.

If you’re into city life—the high energy, the shopping, the fun restaurants, bars, and clubs—then Scotland’s got that.

If you’re into peace and calm and quiet—taking time to be in nature, detach from technology and people, and give yourself some time away from all stress—Scotland’s got that too.

Are you physically active and looking to keep up with activity while traveling? Maybe doing some hill walking on hills that resemble mountains? Again, Scotland’s got your back.

Do you like history—exploring the past while living in the modern world? Oh, Scotland very much has that.

Scotland has tons of great things to offer you, whether you’re there for a short stay or a long one. You’re never going to be short of great ways to entertain yourself no matter what you’re looking for.

Believe or not, size DOES matter.

Well, at least to me, and at least in terms of location.

I love Scotland’s size. That feels so silly to write. But it is genuine.

I’ve mentioned before that I don’t like big cities like New York or London. I’m pretty introverted, and I can also be rather shy—so big, overcrowded places can easily overwhelm me.

Which is one reason of the many reasons I’ve come to love Scotland. I’ve never felt overwhelmed in Scotland, even when in unfamiliar places. As I wrote in my poem titled The Scottican: “cities embrace without strangling.”

It’s so easy to get around. I’ve had little issues walking from place to place. But I also think public transportation there is wonderful (at least compared to the States). You can manage without a car, unless you’re looking for extra convenience. Or if you’re doing long hauls in the Highlands. But in terms of daily life, you’re fine not having a car.

Scottish people are the best people. I’m not kidding about that. The motto for Glasgow is “People Make Glasgow”. I find that to be a wonderfully true statement. The people of Glasgow really do make Glasgow a great city.

But greatness isn’t just limited to Glasgow. No matter where I wander in Scotland, I always find wonderful people.

I feel this is a silent known about Scottish people. Among my favorite songs by the Corries is Scotland Will Flourish. The entire thing sings praises of Scotland’s people: hard-working; proud of their history and heritage; egalitarian and fair to all. These are qualities I find in most Scottish people I’ve met without them truly realizing it. This stanza sticks out to me:

“And let us be known for our kind hospitality,
a hand that is openly proper to friends.
A hard-working people, proud and unbending,
Scotland will thrive and win out in the end.“

This line is repeated twice in Scotland Will Flourish, and is thus the biggest praise: that the Scots are kind, warm, and generous, welcoming to others and treat each other as kin. Whenever I’m in Scotland, that is the energy I feel from people. Whether it’s sparking up chats with the taxi drivers or restaurant servers; or seeing people offering food and tea to the homeless; or even people chatting with you on trains, bus stops, or at the grocery store.

I’ve yet to meet a Scottish person who I disliked. And if I have, then the bad memory was sponged away by how many other good, kind, and genuine others I’ve met.

Personality is definitely something Scotland has. There are so many things that are just inherently Scottish. It’s those very Scottish things that add to my love and enjoyment of Scotland.

This one is hard to write about because it feels like it’s an “understood” idea. There are just things that are Scottish—that contribute to the personality and individuality of Scotland as a nation—and so many of those things are worthy of celebration and recognition.

I mean, you’ve got Scotch Whisky, kilts, bagpipes, haggis, Highland Cows, heather and thistle. You’ve got a history that’s known for honor and strength—see my entry on our continued love of the Scottish Highlander. Though that Highland history might not entirely be what we remember it for, the beliefs of honor and strength have certainly been held true by Scots themselves. You’ve also got voice and accent—which many outside Scotland believe to be incredibly attractive—but also language in both Scots and Gaelic.

In addition to all this, I consider Scotland’s own scenery as part of its personality as well. There are so many times I see pictures on social media and know it’s Scotland before I see where the picture was taken, so even Scotland’s own landscapes and architecture in the Highlands and Lowlands alike are part of that individuality that makes Scotland so great.

It always shocks me that people don’t see just how unique and wonderful Scotland can be, as it’s something I wish was celebrated more—which is one of the biggest reasons why I started this whole website in the first place!