This is a subject I’ve thought about a lot, but have also tried to determine how to put to words. There is so much to Scotland beyond the memory of the Highland way—and yet that seems to be what has captivated the world. It’s the Highlander vision that most people imagine when they think about visiting Scotland.

And yet that’s not completely accurate for modern day, especially considering the history that took place—how the Highland way was outlawed after the Battle of Culloden. While some strive to honor certain traditions of the Highland lifestyle, we’re unlikely to see many Highlanders today simply due to modern society.

We call our loved ones our clan, but we don’t exist in the same way a clan society would. Most Scots might wear a kilt on a special occasion, but rarely do we see those wearing the traditional plaid. And while we are seeing a resurgence and a push to increase Gaelic usage and awareness, we know that the years of it being outlawed stunted its growth.

A Note About Clan Lifestyle

While I do try to acknowledge that there was balance and order within a clan system, that doesn't mean Highland life was without flaws. There were feuds and raids, and—yes—even murders amongst warring clans. We are talking about a lifestyle that existed centuries ago, and no matter how much we romanticize it, it was not always an easy, peaceful, or beautiful way to live.

In knowing this about Scottish history and in falling in love with Scotland in present day—and in seeing the popularity of shows like Outlander—it does have me thinking about that Highlander vision that we still adore.

I’m not denying my own appreciation for it, but my need to dig further had me asking the question: why?

I was English major in my undergraduate years, so I do love digging into literature. That felt like exactly where I should start digging into that why.

Because the biggest place we see people still holding a candle to the Highlander is romance novels.

The success of Outlander and Jamie Fraser is a single piece of evidence towards that. One need only to scan the romance section of their local book store to find dozens of covers featuring a buff Highland man, cradling a busty lass in his arms.

When it comes to romance novels, certain places can stop in time. We hold onto that vision, even if it is not in line with the reality of the day.

Take the Victorian Era England, for example. So many people who cling to the romanticism of that era—Oh, Mr. Darcy!—despite the Victorian Age being very repressed and likely very unromantic. Honestly, that’s why Austen, Gaskell, the Brontes, and all female authors of the time writing about romance was a big deal.

The Highlander is where Scotland’s romantic vision has frozen in time.

But why do they freeze in time?

My theory is people like seeing a dynamic of intense passion combined with a hint of reservedness with romance.

The Victorian Era works well with that desire because it’s known for being repressed. Marrying for love—what we think of as love—was a luxury that most could not afford. Love wasn’t a common reason for marriage. Even if feelings blossomed, emotions were deemed inappropriate to share.

But there’s something exciting about that passion hidden beneath. That you’re repressing something so intense and fiery that when it finally comes out, you as the reader can feel that same energy explode from the page, even if it’s a slow burn that happens over time.

It’s the simple idea of the fire that burns beneath that mask of custom and propriety.

Let’s get the obvious out of the way first.

While the traditional Highlander himself might have been lost to the times, the Highlands are still very much alive today. Moreover, the Highlands exist as a place of magic and mystery—at least, in our imaginations (though don’t deny it; there is definitely something magical about the Highlands).

That vision of the Highlander can continue living simply because the Highlands and their own visual magic still exists.

But back to the literary. When we think of a Highlander, we don’t think of “customs and propriety”. Further, we can’t deny the history of violence and murder within Highland society.

Basically, the Highlander vision doesn’t match the vision that people still carry for the English Victorian, who wouldn’t dare live such a “savage” lifestyle.

But that doesn’t mean that some similar rules of honor don’t apply.

Here is why I think the Highlander vision still sticks with us:

I mentioned this in my entry on Glencoe: the code of honor and hospitality within the Highlands was very strong. One could trust they’d be safe under their host’s roof, but they’d also be giving gratitude and courtesy to their hosts. That is one reason why the Glencoe Massacre was so horrifying.

But this Highland honor code does relate back to the idea of customs and propriety. It’s not the same repression that we see in the reserved Victorians, but it’s that sense of decorum. It’s knowing there’s a way to act and behave. This ties into:

This idea separate, though it does tie in to the above Highland Honor. Because while the Highlander can share decency and respectability with the Victorian, visually he looks more like a knight. A Highlander with a code of honor and hospitality can conjure up visions of a code of chivalry.

Our Highlander is one unafraid to charge into battle, but also lives by a code of honor and integrity. It’s this unique combination of honor and strength of body that bring us face-to-face with a:

Our Highlanders aren’t called warriors for nothing. No image on a romance novel cover is complete without a muscular Highlander, and most feature one who knows how to use his sword (pun intended).

So we can look at our Highlanders as defenders and protectors, which fits into the archetype of strength and masculinity. Our Highlanders become these fiercely strong and courageous beasts who’d charge into battle and defend honor, clan, and country with just a sword in his hand.

But it’s not just the intensity of a warrior that holds our captivity; it’s the fact that he’s principled. This is why the elements of Highland Honor and Chivalrous Charm are so important to the Wooing Warrior. Without those, our Highlander is naught more than a brute.

The Highland warrior knows his strength; is confident in that aspect of himself; trusts that he could face any foe on the field; but he knows to hold the space for his lady. He knows to preserve for her the respect and honor she deserves, realizing that brute force does not win a lass’ heart.

But it’s also the knowledge that a warrior who fights passionately on the field can also fight passionately for love.

And then there’s the kilt—or, what most romance novel covers are actually replicating, a plaid. That definitely plays a part in it, and no one can tell me otherwise!

A Note on Kilts vs Plaids
As mentioned in my Huv Ye Seen It: How to Wear a Plaid (Kilt) entry, there is a difference between kilt and plaid. The kilt is the single piece that wraps around the waist that we see most modern Scots wear at formal occasions. The plaid is several yards of fabric that an individual would pleat themselves before belting the fabric around the waist. The appearance is similar to a kilt, but it allows for extra fabric to wrap around the shoulder, as we often see Jamie Fraser wearing. The tartan is the pattern on the kilt or plaid. See entry for video of Andy the Highlander demonstrating how to put on the traditional plaid. 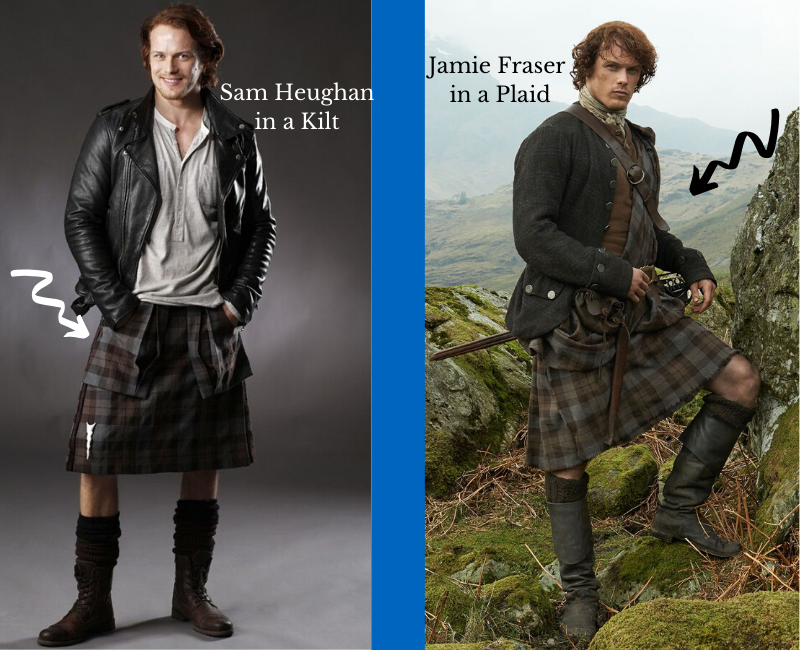 I know, I know, you’ve got people who mock kilts and call them unmanly until their blue in the face. You even have people who do not find kilts attractive. Of course, we all have our preferences.

But there’s no denying that the vision of a Highland man, donned in full kilt regalia, is a proud and noble sight. (And handsome as hell)

But Was It True?

Well, similar to how we romanticize the English Victorian Age while historically it wasn’t exactly romantic, we can’t confirm that the Highlanders of the time also lived up to our romantic visions of them.

We can assume that because the Highland way of life existed with a certain code and sense of honor that there may have been instances of chivalrous behavior, but we cannot confirm that every Scottish man was a gentleman.

Using Outlander as an example: what if most men behaved as Angus or Rupert or Dougall, rather than Jamie? Each of these examples of (fictionalized) Highland men had their flaws, but also their admirable behaviors. Would we still admire the Highlander then?

It would probably take away from some of the fantasy element, and that is the biggest element involved here: fantasy.

But that brings us to present day and how that fantasy can affect the way we look at the world—in this case, Scotland—today.

I don’t think we should abandon the idea of the chivalrous Scottish Highlander. For many, it can can be fun and enjoyable.

Plus, in some ways, it helps connect people to Scottish history, even if it isn’t 100% accurate. Outlander certainly isn’t, but it’s given Scotland and her true history more sight, thus having more people seeking to visit and learn.

Further, it shows that what history once tried to erase or put down actually endured and became beloved. As an Albaphile myself, I adore that.

But let’s remember that when we’re visiting modern, present-day Scotland, we’re not likely to find what captivates our imaginations, especially if the thoughts are based on romance novels. Fantasy is a wonderful way to enliven our imaginations and get us seeing the world in new ways, but it can be detrimental if we go overboard, causing us to believe that the fantasy is actually true.

Because in some ways, you do have Outlander making women think that all Scottish lads are like, “Hello, my lady. I’m a handsome, kilt-wearing beefcake, who is also a virgin, and I want nothing more than to pledge my body, soul, and life to ye.”

When really, you’re more likely to go out in the streets and hear, “Awright, hen, ye wantin pumped the night?“

I’m obviously joking (or am I?). But the fact that we live in a modern day where you might come across something like that isn’t a bad thing.

I’m certain there are people who go to Scotland, or simply think about Scotland, and keep this idea in mind. Perhaps they even hope they’ll go abroad and find their own Jamie Fraser.

But most Scottish men are not Jamie Fraser.

And that, too, is not a bad thing.

Thank you to EVERYONE who took the time to read this. This was an in-depth piece for me to write, and it's an interest of mine that goes behind just Scotland. A subject that has fascinated me that I plan on writing about and researching more is masculine and feminine archetypes and our own psychology surrounding them, so this was an opportunity for me to combine my interest in studying that with Scotland.