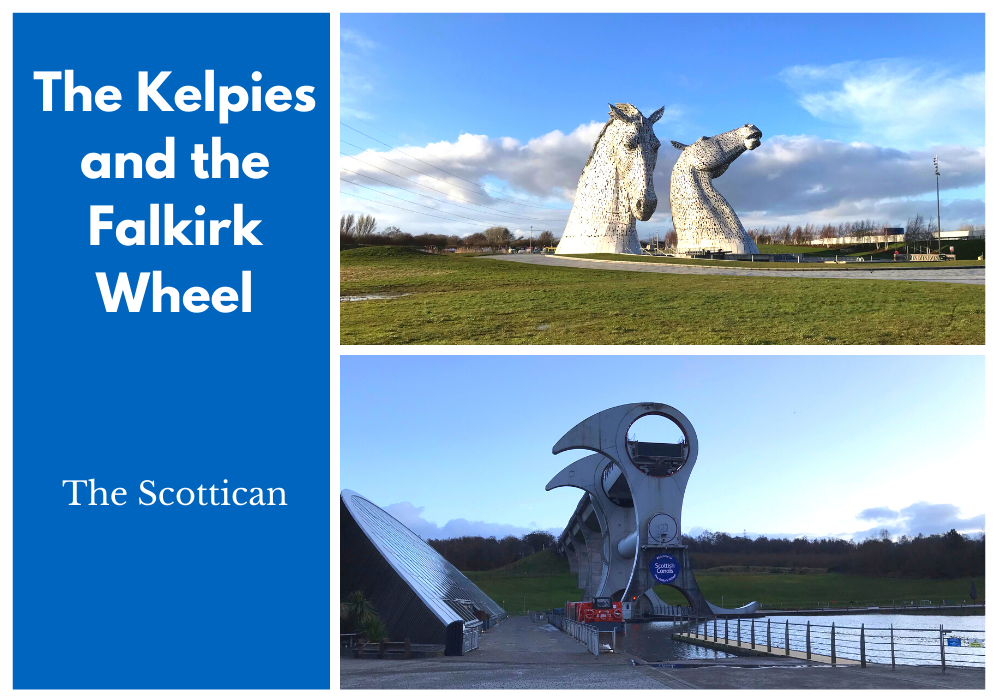 It feels like it’s been ages since I was last in Scotland. Though that’s a common feeling after my vacations; it’s not just a symptom of lockdown. But it also feels so long ago since I’m only now getting to sharing some of my trip with you! Today, I’m sharing my afternoon at the Kelpies and the Falkirk Wheel, along with pictures and info on both.

To set the scene, though the sun is out in these photos, it was FREEZING that day. This is late February/early March weather, and it was a weird time to be there. One day, I went for a walk around the block and as soon as I stepped outside, hail EVERYWHERE. To the point where I couldn’t see in front of me because it was pure white! Then, within five minutes, it was clear, but cold, again. It’s not a joke when people say you can experience all four seasons in one day in Scotland.

But I’ve side-tracked. Let’s take a walk to the Kelpies and the Falkirk Wheel from our own homes!

I’ll start with the Kelpies, as that was the first stop my friend and I made during this journey. This was my very first time getting to see them and I was super excited for it! I see them in so many photos of Scotland. They’re always gorgeous—whether during the daytime with the sun shining through or at night when they’re all lit up.

The Kelpies are an impressive sight up close, and I really can’t recommend seeing them for yourself enough. Pictures and descriptions are wonderful, but it was amazing to see them at full height.

Located at the Helix Park, they stand about 100 feet tall and are both made of 300 tons of structural steel. Amazingly they only took a couple of months to make, construction starting in June 2013 and being completed in October! But that is due to what makes the Kelpies such a visually gorgeous structure: they are massive statues built up of several smaller pieces.

Despite being completed by October 2013, they remained closed to the public until April 2014.

The Kelpies of Falkirk are modeled after two Clydesdale horses, Duke and Baron. They represent the strength of these great horses, and how said strength helped to build the industry and economy in the local area for so many years.

Yes, that’s right. These monuments are in honor of literal horse power and its importance to shaping Scotland.

The name “Kelpie” does come from the famous mythology monster, which I covered in an entry about Kelpies mythology. Another part of the Kelpies mythos states that the loch beasts were as strong as 10 horses. It’s for that reason the name was chosen for these statues. And it seems apt since their purpose is representing the strength of horses in helping to build Scotland.

As noted, the Kelpies reside at The Helix Park. While many tourists do flock to the location to see these magnificent statues, there’s also loads to do at the park as well. Some activities include walking, cycling, and watersports. There’s even a lagoon for swimming and an adventure park. A visit to the Kelpies could lead you to a full day adventure. (Though, not right now, obviously)

So named after the the town in which it resides, the Falkirk Wheel is a 115 foot tall rotating boat lift. Even more impressive: it is actually the only rotating lift in the world! It connects the Forth and Clyde Canal with the Union Canal. As the phrase “rotating boat lift” implies, the Wheel rotates to lift (or lower) boats that come through to pass.

Prior to this, the canals were connected via a staircase with 11 locks. This meant passing boats could take up to a day to pass! In 1933, this was dismantled and so the Forth and Clyde and Union Canals remained unconnected until the creation of the Falkirk Wheel.

Ideas arose for this rotating wheel in 1994, more than 60 years after the dismantling of the previous staircase lift. But the actual construction didn’t begin until 1998. It cost approximately £84.5 million to build. Parts and pieces for the canal were built in Derbyshire, and were then transported to Falkirk to be assembled together into the lift. The Wheel was completed in 2002, and was opened by Queen Elizabeth herself.

A fun fact about the Wheel: though it is a massive and a completely unique structure—remember, it’s both the world’s first and only rotating boat lift—it does not take too much energy to power the lift itself.

For comparison, the Wheel only needs the same amount of power to turn as it takes to boil 8 tea kettles. I think that’s pretty amazing for a structure that’s 115 feet tall and lifts boats!

The Falkirk Wheel is open and available for visitors to view for free. You can even book a 60 minute boat trip through the Wheel itself to experience the boat lift. Or, if you choose to remain on shore, perhaps you’ll be lucky enough to witness a boat going through so you can see this brilliant piece of engineering in action.

On site, as shown above, there is a wee playground area, and also a visitor centre and a cafe. Unfortunately, both were closed by the time we got there, so I don’t have a report on either of those—yet.