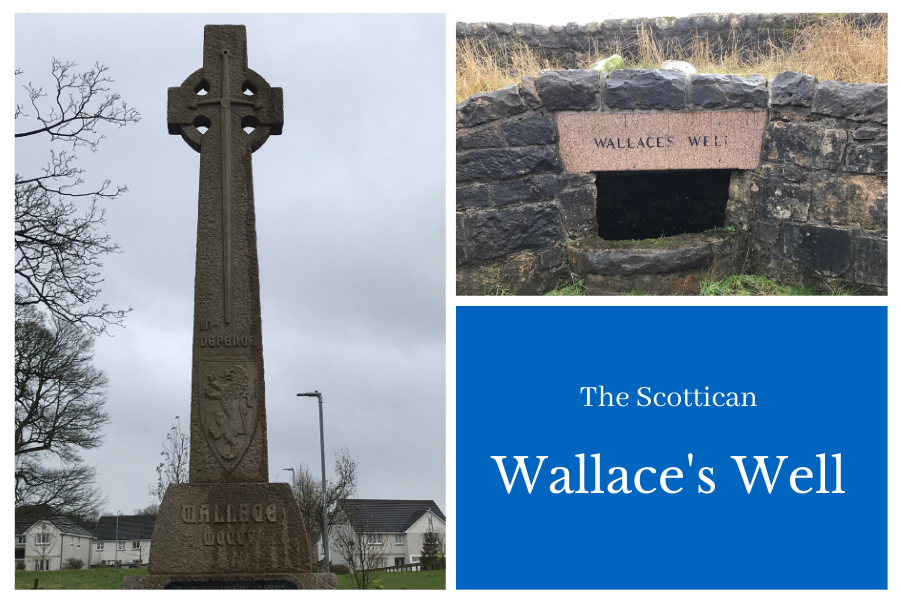 I haven’t written too much about my last trip to Scotland since I got back. I’ve been trying to avoid encouraging travel just now. But I also want people to be able to get excited about traveling again (when we’re able to safely do so). And for those who are interested in traveling to Scotland, I would like to help provide insights and recommendations.

So let me talk about a little place I got to visit, not too far away from where I was staying in Glasgow. This is a bit of a secret spot to check out, as not a lot of people know about it—locals included! Several Glaswegians I know knew of the areas known as Wallaces Well, but didn’t know there was an actual well to see there!

What’s so special about this well? WELL, it’s said to be the last place that William Wallace drank from before he was captured by the English.

I’ll give a bit of history about Wallace here, thought I’ll keep it especially brief; as a major figure in Scottish history, he’s deserving of his own entry. It’s estimated that he was born in roughly 1270. He was known for his fight and desire to see a Scotland free from the rule and tyranny of England. While in Glasgow, he was betrayed by the Earl of Menteith, and was thus captured by the English. After this, he was taken to London and was hanged, drawn, and quartered on 23 August 1305.

To this day, he is considered a hero who fought for the honor of Scotland. His sword can still be viewed today on display in the Wallace Monument in Stirling.

And while the monument in Stirling is more famous—and quite a bit bigger—there is also a Wallace monument in Wallace’s Well too. The monument, sometimes called the Wallace Cross, was built in 1900. It is meant to mark the exact spot where Wallace was captured.

As shown in the photographs, the well itself is labelled as “Wallaces Well”. This is actually part of a restoration. The well has undergone a few since the time of Wallace himself, its most recent being in 2011. Prior to that, there had been lots of discussions on what to do with the well. It’s likely that the film Braveheart helped keep the allure of Wallace alive in the hearts of those outside Scotland as well (though please don’t take that film for historical accuracy).

The well and the monument are along the same road. You’ll notice they’re both located in the area of many new housing developments; you are not lost if you end up there! If happen to take a walk on Auchinleck Road, you’ll be able to see both. Though hopefully when you venture out, it’s a bit warmer than it was for my friend and me; we were both racing to get back to the car!