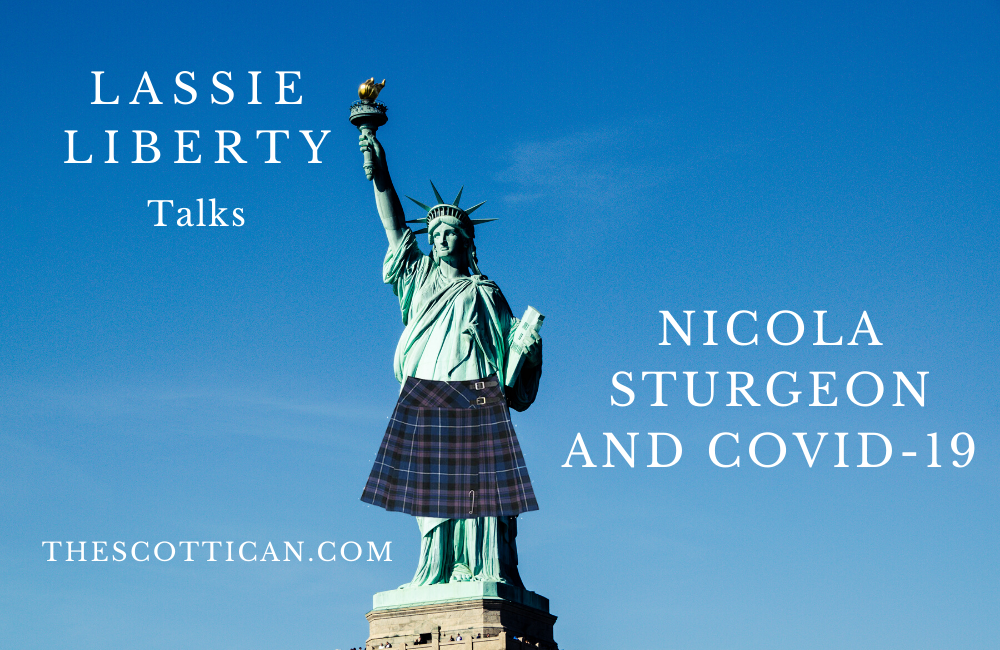 We are still a world caught in the midst of quarantine and isolation. I’ve seen a lot of disheartening things; things that make me livid; but also the occasional things that bring me hope.

As is evident from other Lassie Liberty posts of mine, I’m not the biggest fan of how the Conservative party and Boris Johnson have handled the COVID-19 epidemic. I feel like so much vital time was missed to start locking things down, in favor of “herd immunity” while experts insisted on quarantine. There’s been accolades for the NHS—which are well-deserved—but a severe lack of protective equipment healthcare workers need to protect their own health while they work to save lives, and I’m not going to let go of the fact that the Conservative party has historically been in favor of selling off the NHS and leaning towards a more American-style private healthcare system, and have regularly voted against increasing the wages of healthcare workers.

But I have admired the way Nicola Sturgeon has been handling the situation thus far.

And, sure, people will laugh and argue, “Well, of course you do; she’s the First Minister of Scotland! Of course you’re going to agree with everything she says and does.”

Honestly, I know nothing I say or do will convince those people otherwise, so I guess this entry isn’t for them.

I follow a lot of Scottish pages on social media, so I do see fair share of what’s being done and said in regards to this epidemic. Sometimes, I’m so caught up in the UK’s affairs and state that I forget I’m in the States myself and our regulations are different.

Nicola Sturgeon, from all the different sources I’ve seen, seems to be being up-front and forward with information, while also being empathetic about situation that is currently going on.

When she has news and updates, she delivers it. She doesn’t wait because she knows this situation isn’t easy for most of us experiencing it. She knows people are eager for some sense of normalcy: seeing friends and family; going out to dinner; enjoying the nice weather. So I appreciate the fact that she open and honest, but also blunt with information. I also saw her calling for lockdowns and people to stay inside quicker than her counterparts in England. That says to me that she was listening, paying attention to, and heeding advice from experts. She doesn’t have the full power to make the call of full lockdown, but she did become much more vocal about keeping the Scottish people as safe as possible.

But along with that, she reminds people that she’s not above them, but struggling along with them. I’ve heard her talk about how she misses her family and wants to see them again, but that she values their lives and safety more. She’s also hosted a question session with Scottish children, who also had questions during this time; she was able to explain the seriousness of the virus and quarantine without causing more worries to young ones.

Moreover, I’ve seen Scotland and her people jump into action in a number of different ways. I’ve seen reports of airports being converted into testing sites; the opening of a new medical centre, the Louisa Jordan; citizens 3D printing out protective equipment; and homeless being moved into hotels to give them a place to stay.

Granted, there’s been some things that aren’t so great. People traveling far away from home for exercise, thus overcrowding parks; people breaking lockdown to go to second homes; or going into the Highlands where society wouldn’t be able to manage an outbreak; reports of police officers acting a bit too overzealously with administering fines and warnings with lockdown violators. Though on the whole, I understand the need for the firmness, especially with the first two noted “not-so-great” things, but I think those two issues require addressing by the police, rather than someone getting fined because they bought something “inessential” along with their essential grocery purchase.

But in terms of Nicola Sturgeon, I feel she’s doing the best she can with the powers she has. I feel I’ve seen a good balance from her in two aspects: the seriousness, the openness, and the logical in terms of facts and what the world is currently going through, and recognizing that its her place to keep the Scottish people informed; but also the kindness, reassuring, empathetic leader that is much needed in times like this, but is often criticized or overlooked.

Lately, she’s been starting to talk more about how there must be a new “normal”, and that the normal we knew before will likely not come back. She’s been trying to share some ideas and visions of what that looks like, and while some are angry because she’s speaking in “maybes” and “possibilities”, it’s because we’re all still stuck in quarantine and there are still so many questions to be answered in regards to the virus itself; we can’t have finalities in what the new normal will be when we’re still in the midst of protecting each other.

Further, it’s still unclear how to move forward, as any suggestions or ideas had on the subject right now will be met with further questions. How does one socially distance at a school? At a pub? How do you regulate that when people are anxious to get back to seeing loved ones?

I think this is why there are still no definitive answers on what the world will look like after lockdown. But that’s how you solve a problem and come to the best solution: by looking at all the possibilities; figuring out what bugs might arise from those solutions; and working through them now, rather than simply hoping that everything just works out okay. Just hoping everything works out okay isn’t a risk you can take when the issue is a virus.

Added After I Finished Writing This Entry

I just saw this pop up on social media. It felt so apt for what I had written in this entry that I felt it needed to be included here as well.

This is what I mean: yes, plenty of times, Nicola Sturgeon has shared information with the Scottish people immediately when she has updates, rather than waiting, but it’s something I appreciate about how she’s handling this situation.

Why should she wait? The entire world is shut down due to a virus. Citizens have so many questions, and giving them information as quickly as possible seems like the right thing to do.

Why does it become a question of if she’s trying to embarrass Westminster?

I mean, 1) she hasn’t brought up Westminster or independence during this pandemic, so why are you bringing up that in this time?

And 2) why not ask why Westminster isn’t giving updates sooner? If you feel that Nicola Sturgeon providing updates to Scottish citizens quickly is embarrassing to Westminster, then maybe Westminster should step up its game.

Because again, THE ENTIRE WORLD IS IN THE MIDST OF A PANDEMIC. The politicians are often the ones that get the answers the quickest. They shouldn’t simply sit around holding it if there is valuable information that would benefit the people. Why wait to share it with the people if it’s something that could save lives?