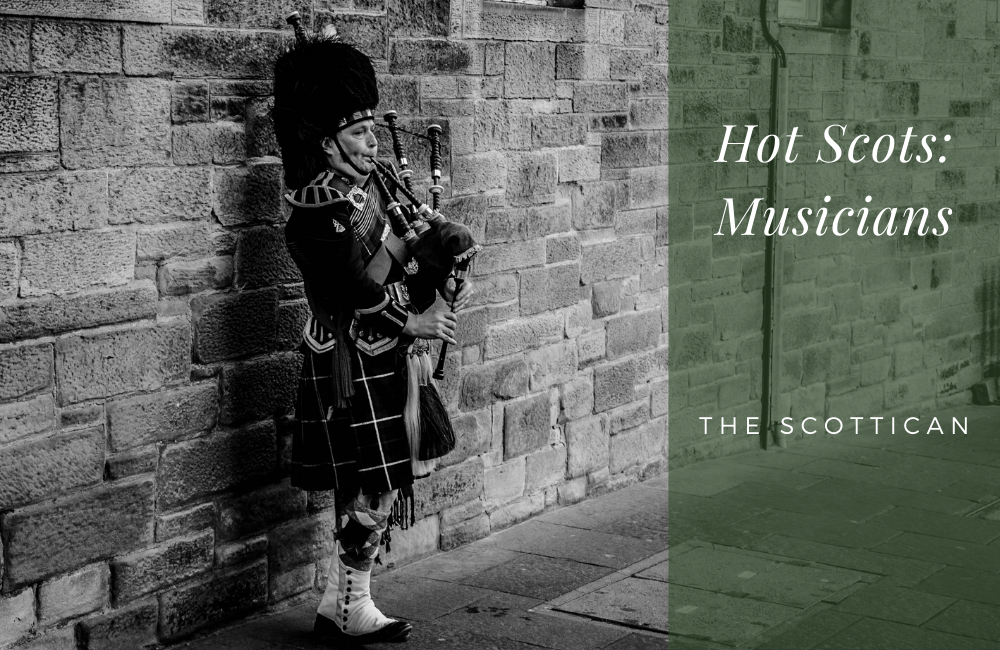 We continue on our journey of Hot Scots this week with musicians. There have been a number of well-known musicians to come out of Scotland, so like the list of Authors and Writers and the list of Actors, it was difficult to narrow down—which may lead to another Hot Scots list at some point in the future!

Lewis Capaldi has made small appearances on this website in the Huv Ye Seen it section—from his being on Innuendo Bingo to my April Fools joke where I shared a video for his song “Someone You Loved” instead of something funny.

Capaldi was born in Glasgow and he exploded in the music scene pretty recently. But he’s been involved in music since he was a kid, playing in pubs at the age of 9. In 2019, that’s when he really began to be seen and recognized internationally, when “Someone You Loved” topped the charts.

And I am sitting here in SHOCK that he’s only 23!

Biffy Clyro is a band from out of Kilmarnock and their genre is alternative rock. Their first album came out in 2002, and their next album—A Celebration of Endings—is due to come out this year, so they are still around and playing, rocking, and releasing albums.

A Celebration of Endings will be their ninth album, so if you’re looking to get into their music, there are 8 others to sample!

Runrig is a band with a history—and still relevant and loved to this day. Formed in the Isle of Skye in 1973, Runrig started off as a dance band. Now, many Scottish wedding receptions end the evening with Runrig’s upbeat rendition of “Loch Lomond” being sung at the newlyweds.

Runrig’s a fun and interesting band, as they are sort of a folk band, but they also have a bit of a rock sound to them as well. If you haven’t heard their version of “Loch Lomond”, it’s definitely worth a listen—though I had a bus tour guide say he doesn’t like how that song became happy and celebratory when it really is a sad song.

But Runrig’s also done loads of songs in Gaelic as well, so if you’re looking to listen to some Gaelic music, they’re a great band to tune into. They disbanded in 2018, but there’s plenty to listen to!

Julie Fowlis is a name you’ll know if you’re familiar with Scottish Gaelic music. She is a beloved singer of Gaelic, but she is skilled at playing a variety of instruments as well.

I love listening and attempting to—and often failing—singing along with her Puirt à beul. What is a puirt à beul? Well, it’s literal meaning “tunes from a mouth”. It’s usually very cheerful and upbeat sounding with words can be very simple or easily repeated. Often, a puirt à beul would be used as song to be danced along with when there weren’t instruments around.

And for those familiar with the Disney film Brave, Fowlis actually sang two of the songs for the film: “Touch the Sky” and “Into the Open Air”.

Okay, even if you’re not a fan of Britain’s Got Talent—which I gotta tell ya, I’m not—you’ve probably seen this clip from 2009. Where everyone—judges and audience alike—saw a sweet, simple Susan Boyle walk out on stage, cracking wee jokes with her sass, and say she wanted to be a famous singer and she was going to sing “I Dreamed a Dream” from Les Miserables.

You could hear the giggles and laughter coming from the crowd. As I watched this video that my mom had sent me, I was wondering what the gimmick was. What was going to happen? Was she going to embarrass herself and I was going to cringe?

And sweet, wee Susan Boyle was born in West Lothian!

And what list would be complete without the lads that are still walking 500 miles—and then 500 more?

Yes, the Proclaimers—singers of the song that we all were belting out at the top of our lungs in the 90s—are from Scotland.

Established in 1983 by twin brothers, Craig and Charlie Reid, the two are still touring to this day—though with a few more additions to the band.

But while I’ve grown up really only knowing “I’m Gonna Be (500 Miles)”, and then later “I’m on My Way” and “Sunshine on Leith”, they do have a great history, having been producing music and albums since 1987 with their latest in 2018.