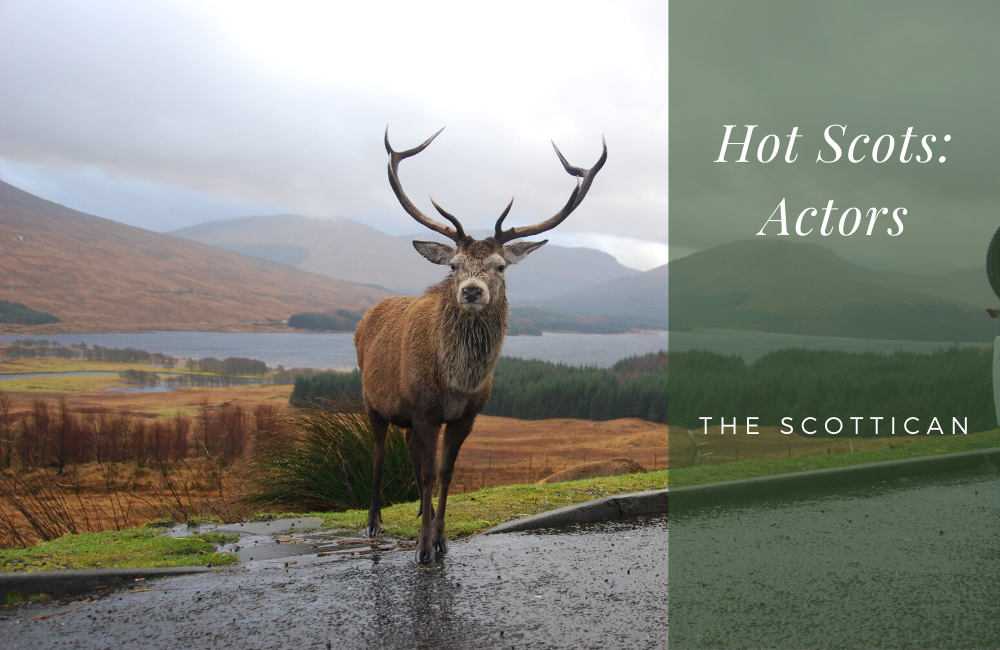 Scotland has given us many famous actors and actresses, but we might not always realize they are actually Scottish. Some have really honed their American accent for films, so you might not notice the recognizable Scottish brogue. Or you might not realize the accent actually is Scottish!

*Note: Sam Heughan is not on this list. Not because he’s not a great Scottish actor, but because he’s currently known for playing a Scotsman himself on the series Outlander. So, it seemed a bit redundant to include him on this list. Plus, I’ve spoken about Outlander and Sam Heughan’s great portrayal of Jamie Fraser a few times here. I felt like I needed to give a few other actors a nod.

This one was actually a surprise to a few people I knew, who thought the actor was Welsh. Sometimes I love the random Scottish facts my brain insists on hanging on to.

But, yes, our very first James Bond was indeed Scottish—though don’t bring that one up with him; apparently he’s not a big fan of the character. He’s taken on plenty of other films that have challenged his acting skills more than James Bond though. While I haven’t watched First Knight in years, I do remember enjoying the story of King Arthur, as he portrayed. Other well-known films include: Indiana Jones and the Last Crusade, Dragonheart, Finding Forrester, and Robin and Marian.

Fun fact: he turned down the role of Gandalf in Lord of the Rings, as he didn’t understand the script.

Connery is now enjoying retirement, having not taken on any new roles since 2006—save for a voice acting role in 2012.

Born in Paisley, Gerard Butler’s no stranger to the big screen, having done several blockbusters in throughout his career. Probably his most well-known earliest debut on the big screen was in Dracula 2000, as the titular Dracula. He went on to do a number of roles in films, including Reign of Fire, Lara Croft: Tomb Raider, and the on-screen adaptation of the musical The Phantom of the Opera, as the Phantom of the Opera, which he had to learn to sing for.

But it’s probably his lead role in 300 as King Leonidas that really put Butler on the map as a common household name. That role earned him both nominations and awards. His career has only grown since then. From voice acting in the How to Train Your Dragon films to leading the—what I call—”Has Fallen” series (you know which ones: Olympus Has Fallen, London Has Fallen, Angel Has Fallen).

You can still hear that Scottish brogue of his in early films like Dracula 2000 and even some hints of it in 300, but you’ll most often hear it in interviews when he’s not in character. Check out my Huv Ye Seen It post with him doing Innuendo Bingo.

Born in Inverness, many might know Karen Gillan from Guardians of the Galaxy and The Avengers: Infinity War and Endgame. She played villain turned good-guy, Nebula. Or perhaps you’re a fan of the new Jumanji films—which, apparently, there’s a 3-film series planned for? Or maybe you saw her in the horror film Oculus. That’s the first place I saw her outside of television roles.

Her career has been taking off recently, but what I really know her from is Doctor Who. She played Amy Pond, a fun and fierce Scottish companion of the 11th Doctor, played by Matt Smith. She was a great character on her own, but was often joined by her husband on the show, Rory, played by Arthur Darvill. I really enjoyed her character and I’ve loved seeing her take on new roles since then and continue growing.

Another actor who has a lot of credits to his name, but I know David Tennant from Doctor Who. As someone who only got into Doctor Who during the reboot years of the mid-2000s, David Tennant was my doctor. I adored him. And this role is especially important for both Tennant, and for his fans, because it was watching Doctor Who as a child that made Tennant decide he wanted to be an actor. To accomplish his dream and portray a role that inspired him is incredibly inspiring, I think.

But he’s done so many other roles that you probably recognize him from. Harry Potter? Yup—he was Barty Crouch, Jr.

Watching either Broadchurch or Jessica Jones on Netflix? He’s in both of those!

Or were you a big fan of the Amazon series Good Omens? Because he was Crowley in that series, too!

James McAvoy is an actor who just seems to pop up in places I wouldn’t expect. I first saw him in Atonement in 2007, but he’s grown so much since then. He was also in Becoming Jane, playing the role of Tom Lefroy; he was a Scotsman playing an Irish character set in Victorian England. So very British!

More famous films for him include: The Chronicles of Narnia; Wanted; X-Men (playing a young Charles Xavier); Filth (based on the novel of the same name by Irvine Welsh); Split; and most recently, IT: Chapter 2.

I feel like he has grown exponentially in the past few years and I can’t wait to see where he goes from here.

Also, as a side note, in this time of crisis and pandemic, I wanted to shine light on something positive I saw in the news: James McAvoy donated £275,000 to NHS crowdfunding campaign—where the initial goal was £200,000!

I used to say that when I became rich and famous, the only talk show I ever wanted to appear on was the Late, Late Show with Craig Ferguson. And now he’s no longer the host, so I don’t know what’s gonna happen with my interview!

I love Craig Ferguson despite the fact I’ve not watched a lot of the Late, Late Show! I wanted to be a guest on it, but growing up, I didn’t really stay up late to watch it. But I love his humor. I think the first time I ever saw Craig Ferguson on TV was on the Drew Carey Show; I remember liking him on that, despite being a kid. And, while I haven’t gotten to see all of the most recent episodes of Still Game, since not all of them are Netflix yet, but I did see a clip of him meeting Isa at the airport and that looks great. He also did the voice of Lord Macintosh in Brave.

The other one I just found out about was he did a few voices in one of the cartoons I loved as a kid, Ahh! Real Monsters.

And brother was born in Glasgow!

Because you can’t have a list of Scottish actors without Billy Connolly!

Like fellow Scotsman Sean Connery, Billy Connolly is retired from acting, but he is still affectionately known in Scotland as “The Big Yin” (or “The Big One”).

Connolly started off his entertaining career by creating a folk band. He then went on to become a stand-up comedian, for which he still still known and loved for to this day. He also lent his acting or voice-acting to several films. Some of these include: Muppet Treasure Island, The Boondock Saints, X-Files: I Want to Believe, Quartet, Disney’s Pocahontas. That last one surprised me. Amazing when you remember films from your childhood, and then recognize the actor names when you get older!

And, of course, he was the voice of Merida’s father, Fergus, in Disney’s Brave.

As stated up top, Connolly is now retired from acting and touring, enjoying life in sunny Florida.