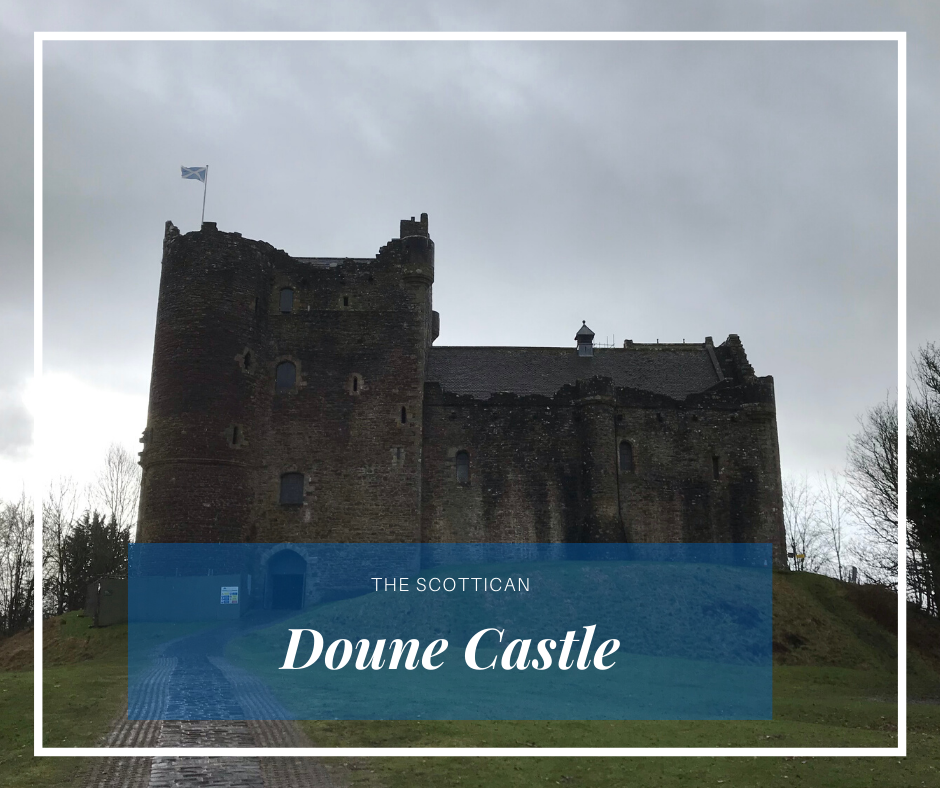 Doune Castle is a site a lot people are familiar with, though they might not realize it. It’s been used as filming grounds or inspiration for several popular films/shows. It’s also simply a well-known castle in Scotland, so you may have seen pictures.

I’ve been fortunate enough to have visited Doune Castle twice so far: once in 2013 with my mom and in March 2020 (before lockdown). Most of these photos are from 2013—including that wonky one where the castle is split in half; still not sure what what happened with my digital camera there.

But let’s put aside some of the fun facts of film and television history of Doune Castle for now, so we can chat about its deeper roots.

The Doune Castle we know today was built in the 1300s by Duke of Albany, Robert Stewart. However, recent research indicates that it was likely built much earlier than this, but suffered damage during the Scottish Wars of Independence.

This particular Robert Stewart comes from a line that I’ll try to summarize. Robert the Bruce named himself King of Scotland in March 1306, becoming King Robert I.

Robert the Bruce’s daughter from his first marriage, Marjorie, married and gave birth to Robert II.

With me so far? Because from my research, this is where things get a little more confusing. So take a break and enjoy some photos!

As you recall, we are at Robert II, son of Majorie, who was the daughter of Robert the Bruce, or Robert I. Robert II is actually the first Stewart King upon the Scottish throne; it was the Stewart line that remained on the throne until England and Scotland united.

Now, Robert II had several sons with several wives. This led to difficulty in determining who had the right to rule after him. It was his son John, from his first marriage, that took up the throne. But this son John took the named Robert III.

Which might be confusing when you realize that he had a younger brother already called Robert. That Robert—the younger son, not John, who adopted the Robert III name—is the one who resided in Doune Castle.

All that just to explain who exactly it was who lived here! Have some more pictures!

So, it was Robert II’s son Robert—not Robert III—who lived in Doune Castle. Robert Stewart served as the Duke of Albany and the Earl of Menteith and Fife through marriage. He also served as effective ruler of Scotland for a time; his brother John (Robert III) had been severely injured, making it difficult to serve as King. Further, John’s son, David was not particularly popular, so Robert bore the role of ruler during his brother’s reign.

He also carried the position onward as John’s son, James I, remained in English captivity after his father’s death in 1406. So from 1406 to his death in 1420, Robert Stewart maintained the roles of Governor and Regent of Scotland.

Upon James I’s return to Scotland in 1424, Doune Castle became a hunting lodge for more than a century. Later, those who occupied the castle would be titled “Earl of Moray”. It passed down the line of Earls until 1984 when it was given to back to the nation of Scotland.

Okay, I think that’s a pretty good summation of the history of Doune Castle. Enjoy a few more pictures and we’ll chat about where you’ve seen Doune Castle after.

Doune Castle itself is not a very big castle, especially when compared to the likes of Edinburgh Castle. But as mentioned at the start of the entry, Doune Castle has been used in several films and television shows.

When I visited in 2013, Terry Jones narrated the audio tour. Terry Jones directed and acted in Monty Python and the Holy Grail—one of the films shot here. The audio tour is a great addition to this walk-through the castle. Jones discusses the history of the castle itself—and listeners can choose to hear more detailed information. But he also shares stories from the filming of Monty Python as well.

It was thrilling to look around one room of the castle and think, “This looks familiar” to have Terry Jones tell me that this was the very room where they filmed “What, the curtains?” scene, which was my favorite as a kid.

It also served in the BBC production of Ivanhoe. And it served as Winterfell in the pilot of Game of Thrones. I didn’t remember that until I took the Outlander tour hosted by Rabbie’s Bus Tours.

But what Doune Castle is probably most known for today is its role in Outlander. We see it straight in episode 1. First, we see Claire and Frank in the 1940s visiting the abandoned castle. At the end of the episode, we see her, Jamie, and company approach a more lively scene. Castle Leoch is none other than Doune Castle.

Because of Outlander‘s popularity, Doune Castle has changed a bit of its audio guided tour. It’s still guided by Terry Jones, but it also includes commentary by Sam Heughan, who plays Jamie in the show. I’ll admit his accent that sounds a wee bit more English than Scottish, though perhaps he was toning it down a bit to ensure all listeners could understand him clearly.

There were only four more additions to the audio tour with Sam Heughan, but he provided some interesting insight. For example, for scenes in Ms. Fitz’s kitchen, they did not actually film in the castle itself. Doing that might cause issue or damage to this ancient castle. Instead, they copied the entire inside as it appeared and shot it in a studio.

I enjoyed hearing Heughan talk about the learning of Gaelic and how seriously he took it. He realized that for a character like Jamie, Gaelic would have been his first language, and that can shape how a character sees, acts, and—of course—speaks.

Doune Castle is wonderful, wee castle with great history—both past and present! It was the first stop my mom wanted to do upon starting our Highland excursion. And as you can see from these pictures, we made it happen and had a wonderful day for it!