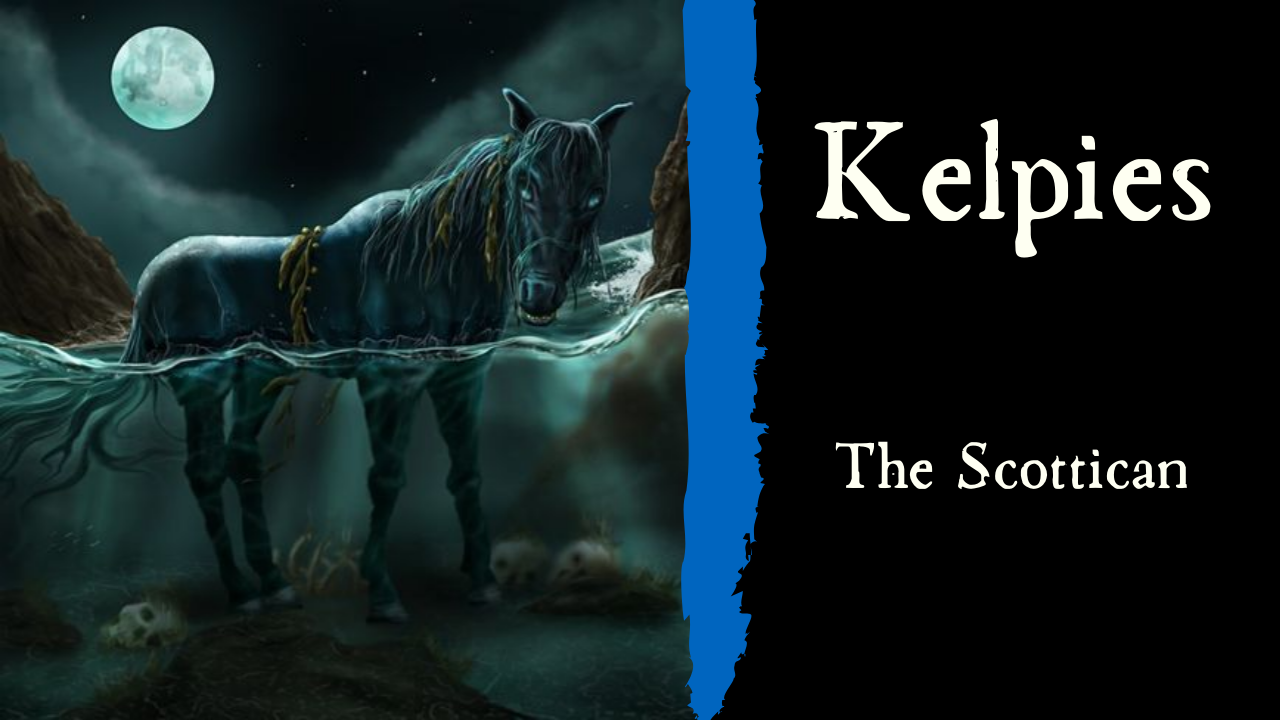 Yes, there is a sculpture called the Kelpies in Falkirk, but we’re not talking about those Kelpies today.

Today, I want to talk about the Scottish myth and the monster: the Kelpie.

It is no secret that Scotland herself is home to many bodies of water—rivers, lochs, and surrounded by the sea. And considering the beastie living in waters of Loch Ness*, it should be no surprise that other stories exist of different creatures, waiting to pull us down into those murky depths.

The Kelpie is one such beastie. The Kelpie is a water horse—literally—though there is some argument though as to whether the two are interchangeable words. Some say they are the same, which would give that movie “The Water Horse” a more sinister story. But others say that a “water horse” lives in lochs, while “kelpies” reside in darker or rougher waters. But many people do interchange these names.

Some tales say that Kelpies can be kind spirits. Some have said that they are kind to children and a warning to women.

But the stories surrounding the Kelpie are usually scary, often centering around someone being deceived by the Kelpie—or worse, meeting their end by the beastie itself.

What Do Kelpies Do?

Many stories involve a single traveler, one who’s been journeying for a long time, who’s happened upon the most beautiful horse they’ve ever seen, saddled, alone, and ready to take the traveler wherever they need to be.

But the terror comes when the hapless victims falls for the allure of the Kelpie. As soon as you sit upon the saddle, you are glued to its back, unable to free yourself. Then, it charges forward into the depths of the waters, dragging you down until you are no more.

Other iterations of the Kelpie myth say that it can take other forms. It’s been told it can take human shape, but the most common form is a beautiful black horse whose hooves are set backwards on their body.

Kelpies coax their prey both by catching the attention of a weary traveler and with music and singing. Some tales tell of a group of children lured by the sounds of singing. One child pets the horse, while the others all climb onto the back; that one child, who notes his hand sticking to the horse’s neck, is the only that survives.

But what does the Kelpie do when it drags its victims into the lochs?

Well, some stories just end after the lost soul falls into water streams below. But we can guess what fates they meet when others happen upon entrails and organs on the shores of the very same loch.

So be wary as ye approach those lochs and rivers abound in Scotland’s realm—and think twice if you should see any horses by the riverbed. Ye never know what beasties might be about, seeking to play a trick on ye.

*Because we all know that the Loch Ness Monster is not a Kelpie or a Water Horse, but a plesiosaur, RIGHT?!

EDIT: While looking through photos from traveling the Highlands in 2013, I found this photo. I believe it’s from a Loch Ness monster museum. What a great find at the perfect time!