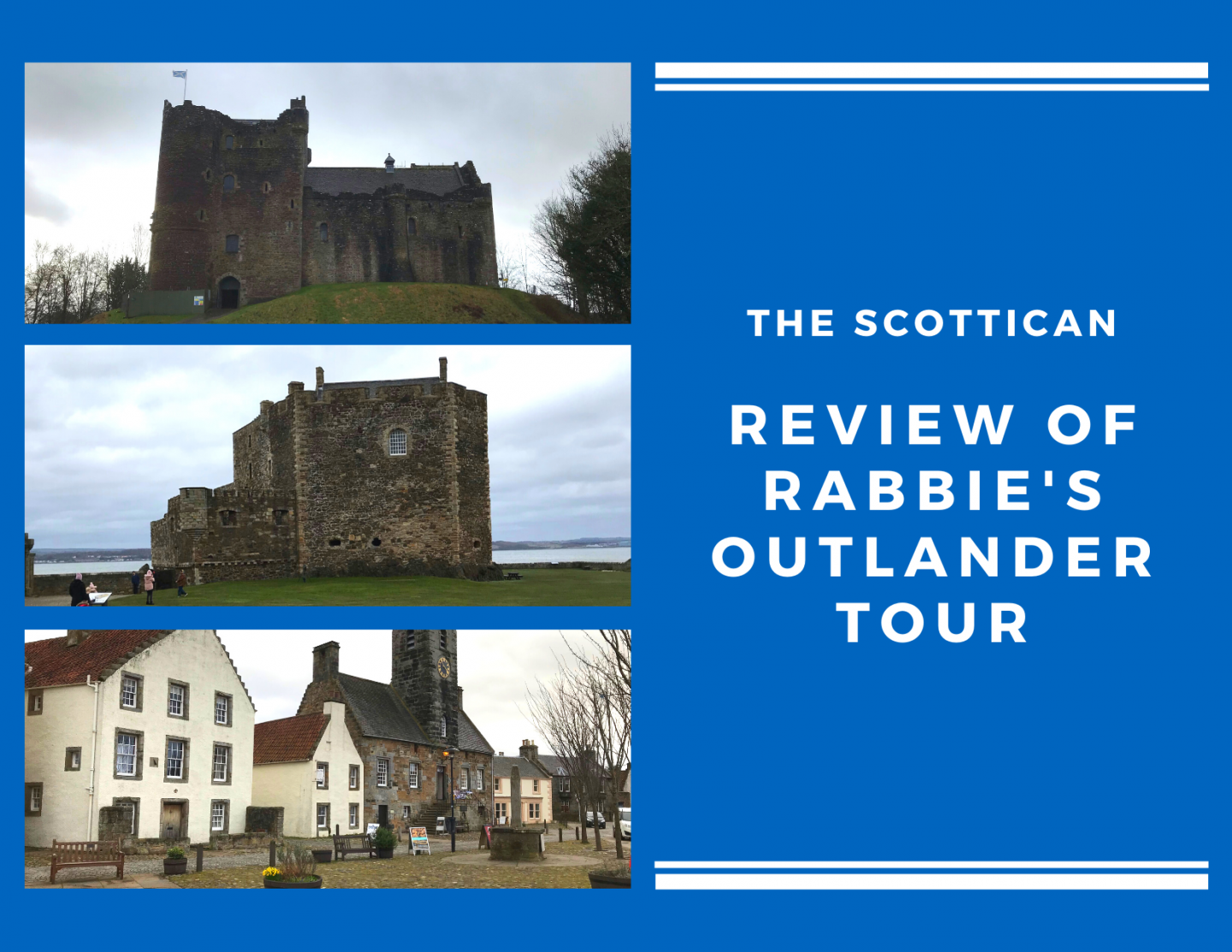 During my February/March 2020 trip to Scotland, I booked myself a 1-Day tour with Rabbie’s Tours seeing the Outlander sites. I’ve watched seasons 1-3 of Outlander and it’s exciting to recognize different filming locations in Scotland. But I hadn’t ever done an Outlander bus tour, so I felt this trip, it was time to do that.

I’ll include some of my own recommendations for this tour at the end of the entry. I do want to state here that this tour does vary a bit, depending upon the season you go. I went during the winter season, thus I missed out on a site I’d wanted to see. So if you’re an Outlander fan and there’s specific spots you’re looking to hit, check beforehand if hose locations will be open.

I started my journey out of Glasgow, arriving at the bus for 9am. This already felt like a perk for me. The past two bus trips I’ve done, I had to arrive by 8ish. So I got to sleep in a tiny bit!

If you’re staying somewhere outside the city centre of Glasgow, it’s a very short walk from the Queen Street train station to where you meet the bus. I was able to walk it in about 3 minutes on a rainy, windy day. That being said, I can be a fast walker and I’m pretty comfortable walking around Glasgow, so if you’re not as familiar with Glasgow, budget yourself a bit of extra time; buses will not—and should not—have to wait for one person when they have a bus full of people who were on time.

But luckily that wasn’t an issue on this trip. The tour-takers on this trip were myself and 5 other people, so it was a very close group. I think it’s due to the size that we had a lot of wiggle room when it came to timing at each location.

We all boarded and headed off to our first stop!

Doune Castle has been featured in a number of shows and films; Outlander was not it’s first time to be noted on the screen. I’ve written about these in my entry on Doune Castle, so check that out for more info.

But in Outlander, Doune Castle features as the home of Clan MacKenzie, Castle Leoch. It’s the first stop on this single day tour.

On this stop, we had plenty of time to take the tour of the castle. You do have to buy this, but you get a wee discount if you’re with Rabbie’s Bus Tours. You are guided through the castle at your leisure with an audio tour.

I visited Doune Castle in May 2013, but this visit the audio tour included notes from Sam Heughan, Jamie Fraser in Outlander. I believe this addition added 4 more audio tracks to the tour, but Sam discusses filming different scenes; learning Gaelic and how that was vital to Jamie’s character; and more fun tidbits regarding Outlander.

This was a substitute stop on this trip. Normally, Midhope Castle is a stop on this tour, but Midhope Castle was unavailable during this tour (which I’ll discuss a little bit more below). Callendar House appears as the Duke of Sandringham’s home towards the end of Season 2. Most famously, the kitchen scene was filmed here.

Unfortunately, I missed seeing the kitchen—the one spot we were told to hit for the Outlander tour—because I started wandering about different areas of the house. I went to the second floor, then the first, before finally finding myself on the ground floor and seeing the signs for the kitchen. By that point, we had mere minutes before we had to get back to the bus. Rather than risking it, I marked it as a place I’d have to visit again at some point.

If you end up at Callendar House for the Outlander tour, and you’re genuinely wanting to see some more familiar Outlander sights, make sure you get to the kitchen. Upon entering the front door, there will be stairs going up; ignore that. To get to the kitchen, look for a small alcove to the left. There might even be a sign that says “Kitchen” there.

That being said, there are two other floors with different things to see, learn, and check out. Most of my pictures from Callendar House will feature that. You’re also able to get food while here, but if you’re on this bus tour, you’re next stop will be the designated food stop!

Linlithgow Palace is another place I’d visited while living in Scotland (when I had my Historic Scotland membership!). So, I didn’t pay to walk through the palace at this time. But another reason I didn’t do that was because I was hungry! And the Linlithgow stop was an opportunity for me (and my fellow bus travelers) to get some grub.

I think all of us ended up at the Four Marys for some pub food, recommended by our bus driver). After inhaling my food, I spent the rest of the hour we were given for touring walking around the main street of the town. I popped into a wee shop to get some biscuits for the road, then walked down by Linlithgow Loch to head back up towards the palace and back onto the bus.

But just because I didn’t take the tour of the palace itself doesn’t mean I didn’t get some fun pictures! Sometimes, the beauty is around the thing you’re meant to be looking at!

For those who don’t know, Linlithgow Palace was used as Wentworth Prison. It’s where some of the more horrifying scenes in season 1 of Outlander were filmed.

Blackness Castle served as Fort William in the series, where Jack Randall’s headquarters were. This was one place on the tour I hadn’t been before, and it was probably my favorite stop. I wish we had had more time to explore it, as I felt I was running through it. This was not the tour’s fault. When visiting a new Scottish site, I have a tendency to take a lot of time to take in everything, and then want to see EVERYTHING; at Blackness Castle, this was made more challenging by windy weather when on the ramparts and walls, or trying to stir clear of the families with little children running around.

But perhaps I felt like there was so much to explore because I hadn’t been here before. There great views both around the castle and within. It’s bound to look familiar to those that are avid watchers of the show.

Culross Village served as Cranesmuir, the town where Geillis Duncan lived. It is actually an example of what a burgh in the 17th/18th centuries would’ve looked like back in the day. Perfect for filming, eh?

Honestly, in walking through the village, you can forget that you are in the 21st century. I mean, you’re swiftly reminded upon getting a car or bus in your photo, or seeing a sign for an Easter egg hunt hanging up on a wall. But it’s still an interesting place to walk around for a while and forget what time period you’re living in.

In addition to checking out the cobblestone roads, the old architecture, and the gardens above that also featured in Outlander (when Claire and Geillis were chatting and collecting herbs), also take a moment to check out Graham Harris Graham’s photo shop, where you can find some amazing prints of photos he’s taken all throughout Scotland. I purchased a print of standing stones myself, and I can’t wait to hang it up! (Check out his website here)

We didn’t get to go to Midhope Castle during this trip, which was a bit of a let-down for me. It was one of the reasons I decided to go with Rabbie’s over another company for the Outlander tour. But it was my own mistake that I didn’t realize we didn’t stop here.

Midhope Castle closes from December through to April. That means no bus tours can hit that stop during the winter season.

It’s also worth noting that if you want to see Midhope Castle, tourists with the bus tour are not permitted to enter the castle. It’s a stop to take photos of the castle that serves as Lallybroch in the television show.

First, I have to give praise to the tour guide. Campbell was very friendly and answered the questions that those of us had during our touring experience, and he had a lot of knowledge on the sites we stopped at—and even some we didn’t! But it was also evident that he enjoyed the show as well. I feel that’s really important if you’re hosting an Outlander tour, so that made his guiding on this tour even more special.

I liked the fact that this didn’t feel like a rushed day. Yes, I felt rushed at Blackness Castle, but this is more because of how I take in places that I tour; I admit I can be prone to just meandering and taking pictures of EVERYTHING. If you’re doing a bus tour, and a single day one at that, you have put some limit on yourself.

But we had flexibility on when we returned to the bus. This could’ve been because we were ahead of schedule in leaving Doune Castle, but it could’ve also been because of the small number of people on the tour. Either way, there was something nice about not feeling as rushed.

NOTE: if you want to do this tour, or another of Rabbie’s single day tours, there is no toilet on this bus. If you’re someone with an active bladder, make sure you factor that into your stops!

My one recommendation for this is: if you’re going to do this, or any Outlander tour for that matter, go in the spring/summer/autumn seasons. I really would’ve enjoyed seeing Midhope Castle, and I think a lot of fans of the show would enjoy seeing that as well, but it is closed until April. So before you book any Outlander tours, make sure that the castle is on the itinerary if it’s a must for you.