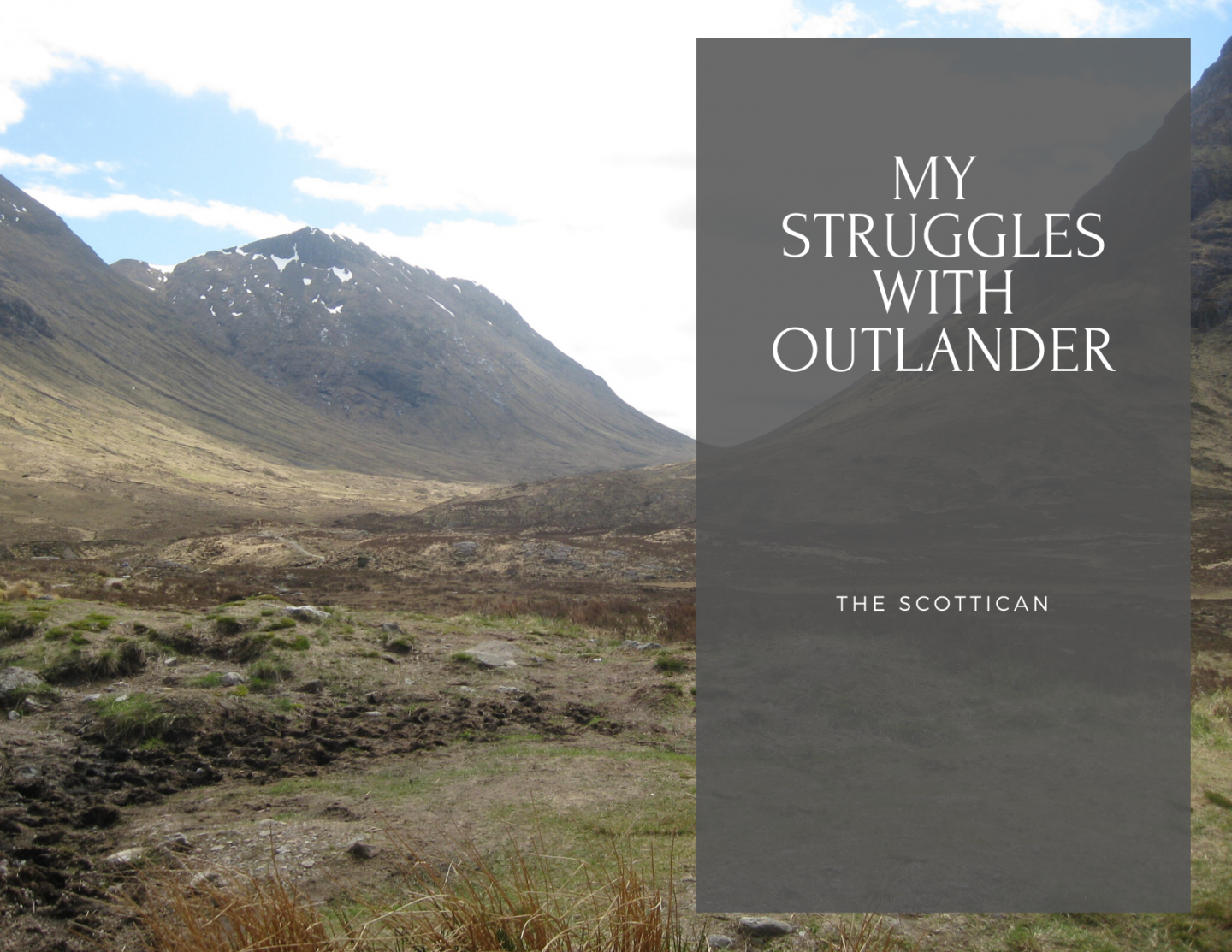 A lot of people today are seeing and having more of an interest in Scotland thanks to the successful television show based on the book series by Diana Gabaldon. I can’t blame them; it was the first book in that series that brought Scotland back to my mind as a place I wanted to see and explore.

While I’ve enjoyed a good portion of Outlander and I think it’s done some great things—see my post about what especially stands out to me from Outlander—there’s been a few things that’s taken away from my enjoyment of it. I have a feeling a lot of people are not going to like it, or they’re going to disagree with me.

And that’s fine! We all have differences and opinions; mine is only one. And mine certainly doesn’t have to be any one else’s, but because this is my own small, space on the web, I feel I can share mine.

Like my entry on my Likes in Outlander, I encourage others to talk about some things they might have issues with in the show, or if you disagree on any of these, let’s chat! I think there’s room to discuss things we would’ve liked to see done differently or even things we didn’t like—there’s room for these discussions if we do so respectfully!

***NOTE*** There will be some spoilers ahead.

Also be prepared for disclaimers with every heading.

I know the story is ultimately a romance, and I don’t object to the romance. I understand that a lot of people love that, and for a while, I was on board, as there was so much more going on in addition to the love story.

And, if I can dig a bit deeper on that—beyond just Outlander—I’m not opposed to romance in general. I know plenty of readers hate the idea of romance being a key element in any story that isn’t explicitly a romance novel, but love is a big part of being human, so to have romance and love be excluded from any genres other than romance seems a little ingenuine.

So I’m not trying to say that the love story between Jamie and Claire is invalid or wrong to have in the show; it’s the biggest driver in the book and television series. It can be moving at times, but towards the middle of season 3 is where it starts to feel like that’s all the story is about—and I personally found I wanted more from the show. By season 3, I don’t feel there’s more to the Outlander tale. Some people love that, and I’m so happy that we have stories that cater to every type of person in the world.

But what I adored most about Season 1 was that ancient feel of a time long ago, in a land I know and love so well, but also the time travel aspect: someone not in the time they were born and not knowing how to get back, but having to navigate a place she couldn’t imagine living even in history class. That drove so much of Season 1.

Season 2, I loved the opulence of France aristocracy, and the schemes to try and derail the Jacobite Rising to prevent the Battle of Culloden, and when they let Murtagh into Claire’s secret—I wanted more of that. Because who wouldn’t have so many questions.

My point being, through Season 2, it felt like there was more happening beyond just the love story of two people who lived centuries apart, and while that is a story in and of itself, I find I want more than that.

When Claire returned to Jamie, I wanted to see and hear more of their talk on their differing timelines. I wanted the conversations, the different perspectives of living centuries apart, more questions from Jamie about his daughter who he’s never met—and it was “blah-blah”ed over to get to the sex.

Which, I understand. Most people are wanting that. I can’t deny that Catriona Balfe and Sam Heughan have phenomenal chemistry in this show, and people were waiting so long to see Claire and Jamie together again.

But it felt, to me, like they rushed over so many of the details of what had happened because we, the audience, had watched the two separately, but I wanted to see how they responded to all of it together.

I love seeing the present-day things get brought back into Jamie’s world and his reaction to them. From seeing the photographs of his daughter to getting jabbed in the arse by a needle. That’s the magic I want to see more of: how you manage between two different centuries.

Because how do you try to get back to normal when 200 years has separated you both? It was different when Claire was stuck there, and then chose to stay in the past, but for her to return to the past after living in her present day for 20 years, that’s more of a change than I felt was addressed. It felt like they only bridged the 20 year gap, and not the century differences gap, and it’s that gap I have a deep interest in.

And, yes, you see more conflict between them as the episodes go on in Season 3, showing that they are two different people now, but I felt let down.

This is another touchy thing to write about—because I do like Claire as a character. She’s a strong woman, bold and very outgoing, and she does not hide nor apologize for her intelligence, which I love. It’s much more interesting and fun to see an audacious woman living in the 1700s, giving back to people as much as she’s thrown, standing up for herself in a time when that wasn’t expected, and using her skills and knowledge to benefit the time and herself. I love that aspect of the show.

But there are times where I’m massively conflicted by this to the point where I get cringey. And I get that sometimes, THAT’S THE POINT. She’s a modern woman living centuries before her own time, and with that comes her own individual power struggles. I understand that’s part of the show and it’s themes, but I guess my issue stems from how intelligent Claire is meant to be, but how she can often appear unintelligent in certain scenarios.

The first episode where she proves her medical skills by tending to Jamie’s arm and wounds, making commands of the Highland men, and throwing their own words back in their face—”You can mind your own business and so can bloody Saint Paul”? Love it. It’s a YAASS QUEEN moment.

Every time she yells and attempts to act out while on the road with the MacKenzies and even accuses them of thievery? The smug look she gives Ned Gowan when she thinks she’s figured out that Dougal’s stealing money from Colum? Naww, Queen. Accusing them of thievery when she’s in a different type and land. It’s just cringe-worthy.

And I get that it’s meant to be; she’s head-strong and jumps to conclusions. In the same episode when she realizes that the MacKenzies have defended her honor and she has to eat her own words? I do get it—it’s a massive theme of the episode.

BUT she’s also smart, has been there for a while, and has a general understanding of the time period. She should know better than to just hurl accusations at people, especially those who she’s traveling with. She’s said it herself that she needs to earn their trust, so it irks to me that she just lashes out on the regular. Yes, even when she feels she’s being mistreated.

In my opinion, it just makes her look dumb, and maybe that’s what bothers me: our strong female character acting and reacting a way that makes her appear stupid, when we know she’s better than that.

Moving Out of Scotland

Okay, okay, before you start typing up your comments, I KNOW this is part of the story and plot. Remember, this entire entry is more focused on my own personal struggles with Outlander, and what I feel made me move away from watching it—and Scotland was a big thing that drew me to it in the first place, so losing it as a main setting is a key factor in what made me lose interest.

There is something that stirs in me every time I watch the first episode of Outlander. Seeing the Scottish Highlands, hearing the faint singing of the pipes… it awakens something in me that I can’t exactly explain.

I’m watching this scene as I type this. I’d tried watching some of season 3, but found I didn’t care to watch beyond Scotland—so I found myself starting season 1 again, to seek out those visions I wanted. And each time, I seem to forget just how potent of a strike I’m hit with.

This feeling that I adore has not stayed with me throughout the seasons, and I think it was this loss that led me to drift away. The later seasons, even with their growth and changes of characters, don’t seem to measure up for me.