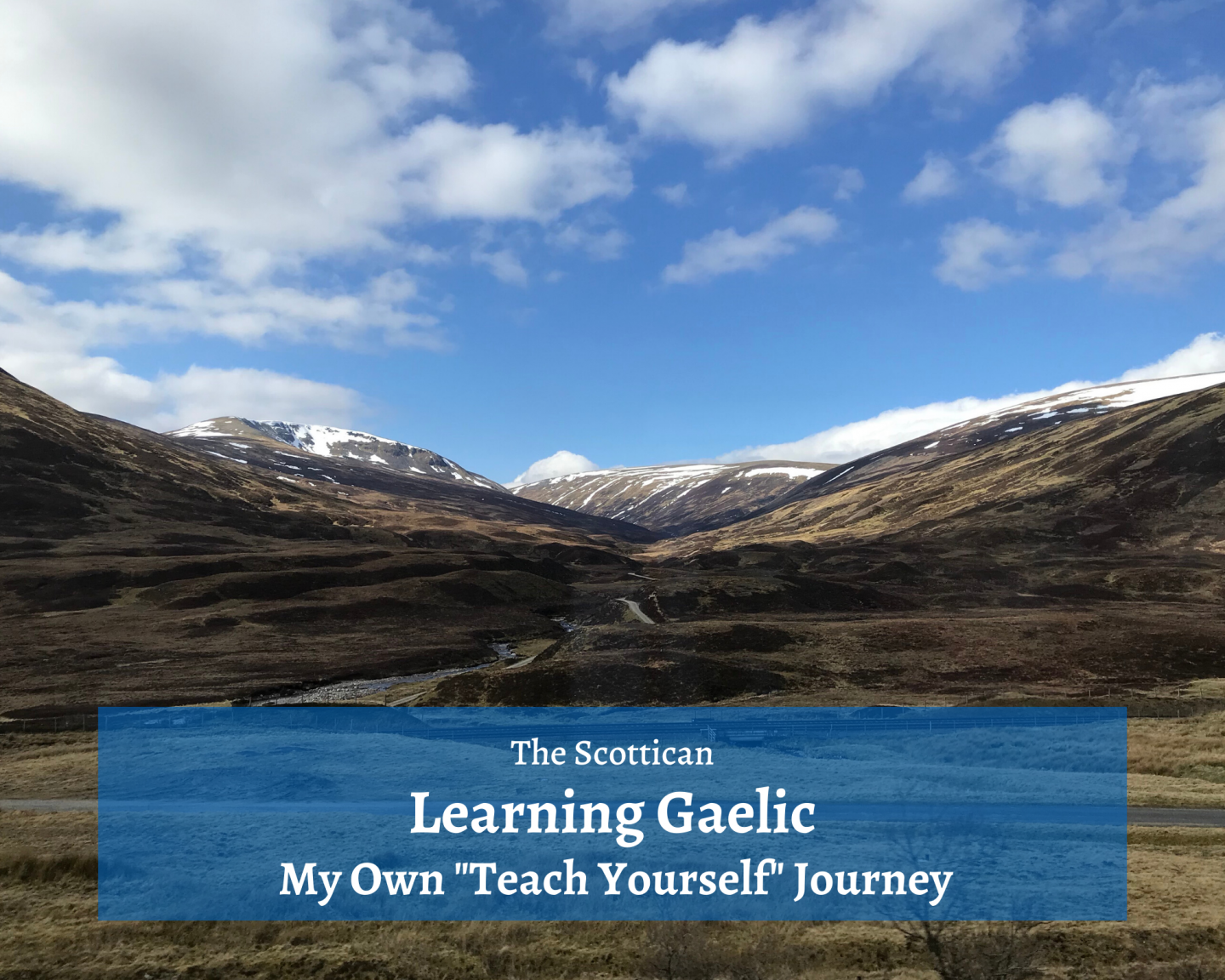 I’ve posted a few entries about the Gaelic language on here, and if anyone follows me on Instagram, they’ve seen some of my posts of Duolingo’s Scottish Gaelic app—there are some amazing sentences coming out of that app!

Though I’m not fluent yet, I enjoy listening to, working with, and learning Gaelic in various outlets.

And Gaelic has been growing in popularity for a few years now, which I think is awesome. When I first tried to learn, there weren’t very many resources I could work with, so as this Gaelic explosion continues, those of us who have wanted to learn, but are unable to get involved in an immersion-style learning experience or can’t afford a lot of high-end courses, are very excited for new avenues of learning now available.

So I wanted to write a bit about what my early experiences had been like in trying to learn Gaelic on my own, what worked, what didn’t, and what some of the new resources available are now.

For several years, I worked to teach myself through resources like Teach Yourself Gaelic (Robertson and Taylor) and finding supplemental resources on the internet. Through various Google searches, I might’ve discovered various PDFs or tutorials I was able to look over and print out, which I added to the Teach Yourself work I would occasionally work through.

Moving on from this, at some point, I also discovered Beag air Bheag, which gave me some little practice exercises to work with, and An Litir Bheag, which helped give me listening practice.

When I lived in Scotland, I further my Gaelic skills, as I busied myself in earning my first Master’s, but I did carry my Teach Yourself books with me to practice (and bothered my mom by reading road signs in Gaelic instead of English).

I also took a tester class for Gaelic Ulpan at the University of Glasgow; this only covered two immersion courses, and I think it only lasted 2-3 hours, but it was a fun taster to get thrown into Gaelic.

But I did do two other things that had me involved in the Gaelic community, though it did not improve my Gaelic fluency: I took on an internship with the Gaelic Books Council during my second semester at university, and I wrote my dissertation on Gaelic Publishing.

After returning to the States, I would use resources like BBC’s Radio Nan Gàidheal to hear the language more often; I’d listen to it during work to keep my ears honed. Despite having familiarity with Gaelic, I didn’t really understand most of what people were saying.

This is getting its own section, as I had a lot I wanted to say about it. Not too long after finding Radio Nan Gàidheal, I found Daily Gaelic—AKA Gàidhlig Gach Latha—Gaelic lessons offered by Caroline Root via Skype. Caroline would create workbooks and exercises and homework, and hosts Skype meetings once a week for an hour, where you’d get a lesson and also get some speaking practice.

I no longer do the online courses with Daily Gaelic, not because I don’t believe in them or didn’t find them helpful, but simply because at the time that I left the course, I’d been struggling a lot personally. It was at the start of my years-long burnout at work, as I’d been working way too much, making everything in my life that had once brought me joy feel like a chore.

With Gaelic lessons, I’d been finding that I wanted class to get canceled every week, and that wasn’t the attitude I wanted to or should bring to class. So I had to step away several years ago in order to focus on fixing the things that were not feeling right in my life—which actually did take years, and I’m still working to improve that everyday (it’s not always easy to figure out how to say “no” to work, so you can say “yes” to yourself; burnout is real, do not ignore it).

I am ever grateful to Caroline for all the work she did on those courses, and she’s evolved them in several ways, from hosting Skype classes with several individuals in a group, to Gaelic learning through email or song. She has a true and tremendous passion for Gaelic, having studied in Scotland and having completed degrees in Celtic Studies and Gaelic Medium Education.

I would still recommend Caroline and Daily Gaelic to anyone who wants to learn Gaelic, especially if you’ve been learning on your own and you want extra resources and growth beyond that. She helped give a solid ground and foundation to some of my learning, while providing regular practice. And she is very sweet, kind, and helpful, which are all amazing qualities to have in a language teacher.

I admit that now, I do not have a great deal of resources to continue my learning of Gaelic, save for regular practice with Duolingo, which released a Scottish Gaelic course in November 2019.

I definitely recommend Duolingo’s new course to aid with the study of Gaelic. If you’re like me and you aren’t taking lessons other than this, then it’s a good way to keep the language in your brain, should you find a time where you’re able to branch out and do more learning. If you’re someone that’s already taking classes, it’s great to use as homework to practice with. It’s honestly a fun way to get in regular practice and build on what you learn, and it’s easy to fit into a packed daily schedule.

Conflicts with Learning on Your Own

The ultimate problem with learning a language solely on your own is there is always a lingering question of whether or not you truly learn it. Reading a Teach Yourself book may help with the few instances you hear on the audio provided, or in reading the text examples, but how does it help you get to fluency if you don’t have regular practice with others or hear natural conversations flow?

I used to excel in Spanish. It was the language I took all throughout elementary/middle school and then high school (secondary school), but I didn’t keep up with it when I went on to earn my undergraduate degree, taking only a random Spanish class in my final year as an elective, and I found I’d lost a lot of my Spanish, despite previously being a straight A student with the language. I could pick up and understand things after a lot of struggle, but my fluency was nowhere near what it had been when I’d been having years worth of learning and practice daily.

This is what can happen if you don’t have regular exposure to and practice with a language, so with a language like Gaelic, which for several years had very little resources and even fewer people interested in learning it, it made it even more challenging to try to practice.

Now, in seeing a resurgence of Gaelic and a myriad of new resources to go with it, it’s a bit easier to learn on your own, but you don’t have to as much, and that is actually a benefit. Learning a new skill is absolutely awesome, but if you can have someone by your side to help you, guide you, or even just encourage you, it’s beneficial.

So You Want to Study Gaelic?

So, if you’re someone who’s looking to learn and study more Gaelic, I’d encourage you to, yes, practice on your own: download Duolingo and do some exercises daily; listen to Radio Nan Gàidheal and An Litir Bheag to get listening practice; try finding Gaelic writing and practice re-writing it, just to get a feel for the spelling; find YouTube videos teaching different Gaelic phrases and repeat what you hear to get a better sense of pronunciation.

But also maybe look around for an online class you can do. Many of us cannot afford to drop everything and go do a full immersion learning course for a month, nor can many of us move to Skye to become full-time students at Sabhal Mòr Ostaig, much as we would like. But that shouldn’t discourage you from looking into resources like Daily Gaelic (Gàidhlig Gach Latha), which offers a variety of different courses and learning methods at a very reasonable price.

My point is: we’ve come such a long way in the past decade in having available resources for learning Gaelic, so don’t limit yourself if you’re wanting to learn. There’s more out there now than there’s ever been, and still growing!