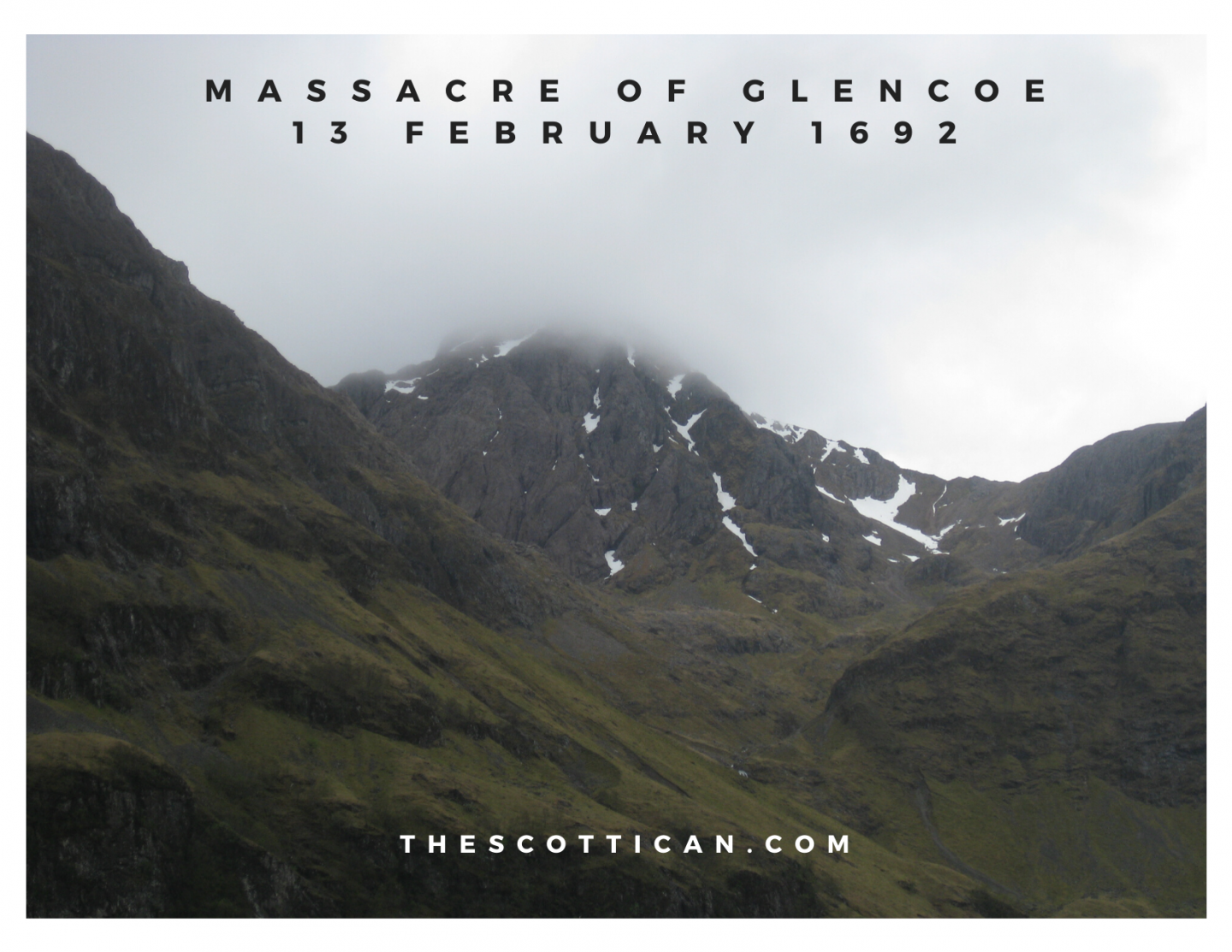 Glencoe is one of the most well-known, and well-photographed, glen in the Highlands of Scotland. It’s both well-photographed for its beauty, but it’s also famous for its history, especially for the Massacre of Glencoe.

But before I go into details about that, I want to mention some other details that people might not know about it.

For example, did you know that Glencoe was recently voted as Scotland’s Most Romantic Glen? Not bad for a place known for a massacre occurring on-site.

Let’s get something simple out of the way: Glencoe is a glen, and glen is a narrow valley. Glencoe is about 12.5 km (7.8 mi) long. It’s is surrounded by a number of mountains, including Beinn Fhada, Gearr Aonach and Aonach Dubh—also known as the Three Sisters of Glencoe. It’s a beautiful place for walking and admiring. Most of the glen is owned by the National Trust for Scotland, a charitable organization the works to protect “Scotland’s natural, built and cultural heritage”.

There is also the village of Glencoe which does have B&B accommodations, some restaurants, petrol (gas) stations, and shops.

The Massacre of Glencoe

The most notable piece of Glencoe’s history is the Massacre of Glencoe in 1692, when the MacDonalds were slaughtered under the order of the Campbells. But this was a tension that was centuries in the making before 1692.

Further tensions arose between the two clans throughout the years leading up to the 1692 massacre, with the MacDonalds often being in favor of the lifestyle of the Highland clans, and the Campbells supporting the central government.

What Led to the Massacre?

Many Scots were still loyal to King James II, but he had been replaced by William III in 1689. In 1691, King William declared that the Highland clans were to swear their loyalty to him by 1 January 1692. Those who did not would be met with fire and sword.

The MacDonald clan chief, Alasdair MacDonald, often called Maclain of Glencoe, struggled to take the oath. He’d gone to the wrong location for the oath-taking, thus had to travel to the correct location. This mistake led to him taking the oath on 6 January, as opposed to 1 January. But he had been assured that he and his people would be safe despite this.

But the order had already been given; the MacDonalds were not to be spared.

The Earl of Argyll, Archibald Campbell, had had some 120 soldiers sharing quarters peacefully at the MacDonald homestead on 1 February. Early in the morning on 12 February, after several days of sharing residence amiably, as well as being provided with food, drink, warm clothes, Argyll’s soldiers struck the MacDonald clan while they slept.

There is some discrepancy over the number of clan members slain. Some say 28, but others say up to 40. While not all clan members were slaughtered, many fled in the night, but died due to starvation and exposure in the cold winter.

But Are the Campbells Solely to Blame?

The order to slaughter the MacDonalds came from London at the urging of the Secretary of State for Scotland, John Dalrymple. Dalrymple was not a fan of the Jacobite cause, Highland culture, or the MacDonalds themselves. While the Maclain of Glencoe was promised safety, Dalrymple saw an opportunity to make an example of the King’s strength.

So while the massacre was carried out by Campbell soldiers, the order was given by Dalrymple with the King’s blessing.

Due to this, many people will cite English control and tyranny to blame for the Glencoe massacre. It’s further evidence of the desire to control the Highlands and limit clan lifestyle.

But there are still many who hold animosity towards the Campbells to this day. I write more about Highland hospitality below.

For lack of a more eloquent way of saying this, hospitality was a very big thing, especially in the Highlands. It’s difficult to explain this, when we’re living in a time where we’re told not to trust people; to not welcome others into our homes; that people will abuse and take advantage of hospitality.

But the Highlands could be a difficult place to live. Shelter could be very sparse and spaced out; the weather could be treacherous; and you could easily lose your way. People in the Highlands were very hospitable with guests, and took care of them. So the MacDonalds took in the Campbells, as was expected and as was often done, and provided them with shelter, food, drink, warm clothes.

More Details: “free quarter” was offered to these soldiers staying in Glencoe. Free quarter was often used in place of taxes in an area where money was often not exchanged.

As with many occurrences within Scottish history, songs have been written about this event, including “The Massacre of Glencoe”. Linked below is the version by the Corries, but there are many versions of this song sung by various artists.

*Note: the pieces written in italics were added after the original posting of this entry. Some was due to concerns addressed by readers, who felt I needed more clarity in statements. Others were added more recently, as I’ve grown more comfortable and confident in writing for this website.