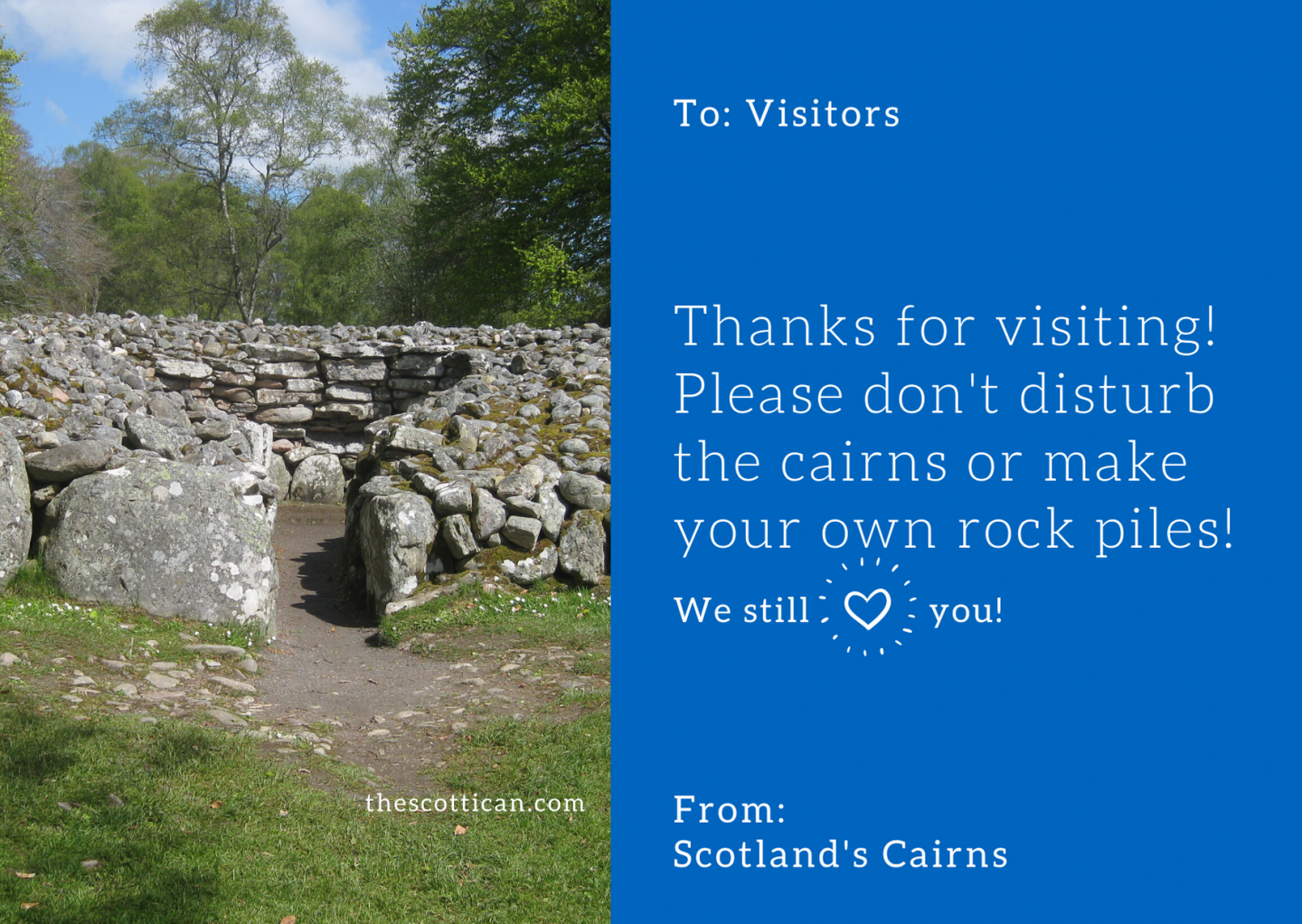 This week is shaping up to be Cairns week! While writing earlier entries on cairns, I ended up having a lot more to say than I realized. So I decided to break some of them up!

Let’s chat about cairns in modern-day, and some general rules for when you’re exploring places with cairns and rock piles.

Today, you’re less likely to find cairns being used as burial grounds such as the Clava Cairns, unless they are relics you visit. But you might find cairns being used more as navigational points. Or even as a marker of one’s accomplishments, which I touched on briefly in my Fun with Gaelic entry on càrn. I’ve found mini-cairns atop Scottish hills where people might place a stone to signify their conquering of said hill.

Harm in Destruction of Cairns

However, there is a risk in adding to rock piles or creating your own. People talk about rock piles a lot on Facebook groups, but it’s also been noted by Culture Trip. We need to remember that there is a purpose to cairns. For some, like the Clava Cairns, they are historical relics, and should be preserved as such. For others, they may serve as navigational markers. Beyond that, the cairns might simply be part of the ecosystem that we should be respecting.

Cairns are often pathway markers for climbers. If one was to knock down a cairn in order to rebuild one for themselves, or add another cairn to a different rock pile, that has the potential to confuse hill climbers who rely on those markers. In an event like that, people can end up lost, and we don’t want that, especially in the Highlands.

This tearing-down-of and remaking-of cairns by tourists can also lead to the destruction of the natural environment as well. I see a lot evidence of this on social media, especially on the Isle of Skye in the Faery Pools.

Moving around rocks from their natural position in order to make a pile for whatever reason can throw off the natural ecosystem; it can damage homes for wildlife or even disrupt irrigation.

I tried to fit this into either of my other two entries on Cairns this week, but it felt important enough to warrant its own entry, so it didn’t get lost among various information.

Rules for Visiting Any Places with Cairns/Rock Piles

This might not seem like a big deal, but it’s the butterfly effect: our smallest actions do have an effect, even if we don’t realize it or see it. If you want to create a cairn of your own for whatever reason, do so in your own backyard.

So I sincerely ask: please be respectful of the natural environment and do nothing to disturb it. You might think knocking down a pile of rocks or making your own isn’t disruptive, but it does have the potential to do harm. We human beings only have one planet to live on; let’s be more aware of our actions and give this planet the love she deserves.